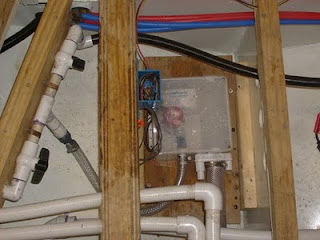 I finished making all the plumbing connections for the cabins. 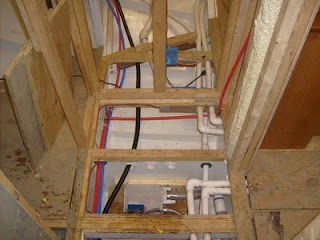 a possible future macerating type toilet, and the wiring for the sump. I made a valid attempt at keeping this space orderly, and if I had used some more fittings on the drain and discharge lines, I could have kept things really tight but I instead opted for less fittings and more flexible pipe.

I'm going to build the shower stall out of tile. Since I was working in this area, I decided to install the backer board for the tile, and 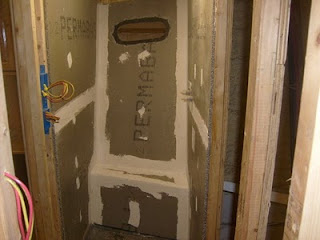 the shower pan. Before I installed the backer board, I glued a closed cell foam gasket to the flange of the port light to stop condensation. Once the tile is installed along with the port light, I'll detail the gasket more so it will make more sense to anyone reading. As per a request from the three woman in the house, I built a ledge in the shower stall for a place to prop up a leg.

After making all the connections, I ran the shower sump to verify the flow rate. The shower sump is not going to have enough ass to move the shower water to my proposed gray water tank area ( the rear of the boat). I'm going to have to find another area for my gray water holding tank. The best place for this tank is going to be close to the overboard discharge point in the forward cabins. The tank will probably end up in the "V" up against the crash bulkhead @ station #1. I think I'll be able to fit a 40 gallon tank. My other choice is going to be under one of the kids bunks. The problem with going under the bunk, is that I'll eliminate a much needed storage cabinet.

I'm ready to sheath the bathroom, the dressing room/hallway, and part of the kids cabin. I'm going to have to hold off on sheathing the rest of the cabin until I get the gray water 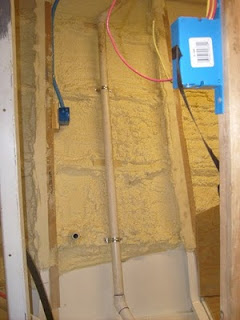 
I'm going to use a composting toilet, but just in cast it does not perform, I installed a transport line for a future macerating style toilet. I 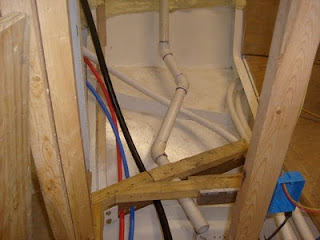 plumbed this in with 1 1/2" sch. for pipe, using pressure fittings. I wanted to stay away from flexible pipe for this application so I had to use a few 45 degree fittings to get the pipe squared back up with the framing as it enters the bathroom area. This 1 1/2" line goes to the rear of the boat where I'll have a black water tank. The folks at Raritan assure me that their toilets can handle the lift and length of pipe just fine.
Posted by Conall at 8:03 AM