This post is really not boat building related  unless one considers that I  heat our shop with a wood boiler.

For years now, I've been splitting my wood the old fashioned way. I saw it, and the kids get paid to split it. In a typical year, we burn about five cords of wood. Because of the work I do, I usually get paid to haul it off someones site, so we usually have an ample supply of 12' long logs.

A friend of mine acquired this wood processor that operates from a skid steer loader, and offered to rent it to me for a weekend. This year, we purchased a new Kubota SV90 compact track loader, which was just the right sized machine to operate this heavy duty attachment.  As you can see, this wood processor, picks the log up, saws it, then splits it through a six way wedge. After a small learning curve, I had the machine dialed in and in five  hours of working  it, I processed about six cords of wood. It should probably be mentioned that I didn't really break a sweat or strained by back.

We already have most of our wood for this year split and ready to go so this recent bit of work is for next season, or it will allow me to crank the  heat up in the shop. Either way, I got a huge monkey off my back quickly and for next to nothing in cash laid out.

As I stepped out of the house early the other morning, I noted how quite the fall woodlands is vs the summer season. Gone are the summer song birds who's chatter fills the woods from the moment the night scape fades. The sound of the dormant season is of the nuthatch and chickadee with their husky calls. For some reason I think of and older lady bartender, withe her bar room baritone voice when I hear these birds.... the laugh of too many Marlboro's and cheap scotch whiskey.  Why that bird call reminds me of this I can't say, but what I can say is that this subtle change in the surrounding woodlot keeps me well aware that the cold months are soon upon us and it's time to haul Gragodeo out for the first time. 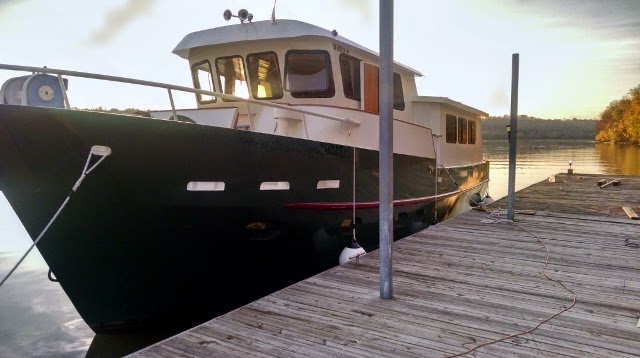 I would have much preferred to keep her in the water over the winter. Having coffee in the wheel house on a winter morning, while looking out on a harbor scape sure did sound appealing, but my wanting to see how the below the water line hull fared during her first season was more important. I'm happy to say that the hull looked good, with no sings of electrolysis or failure of the barrier paint.  The only below the water line issue I saw was where I did not get a good enough scuff on the barrier coat to give enough tooth for the anti foul to be able to bond. On advice from the boat yard paint guru, I'm going to spot sand the areas where the anti foul was blown off by the power washer and re coat those areas only. 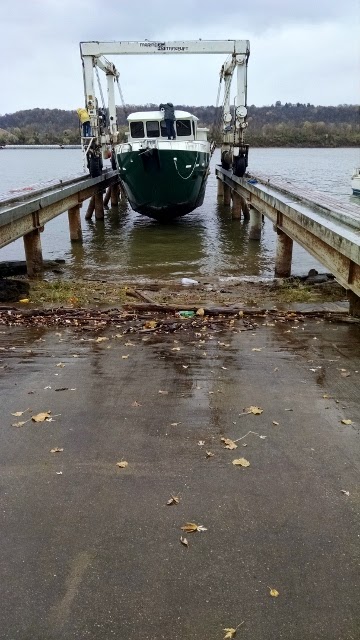 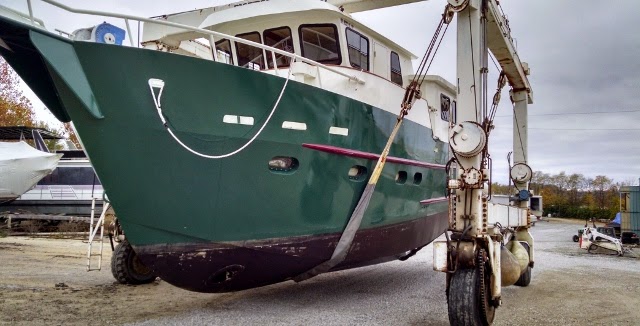 The prop is the other below the water  line area that's going to get a hard look. As I posted some time ago, I'm getting a high pitched sound at certain RPM's . Between 1100 and 1650 the sound is most pronounced. There's really no reason for the stern tube bearing to be making this noise as the bearing was  machined correctly, and the alignment is spot on. Now that she's on the  hard, I looked closely at the bearing, and found no signs of wear or any play in the shaft/bearing. The prop was purchased from an on line dealer and is a Taiwanese or Chinese import. After searching out this harmonic issue I'm having, I'm starting to think I have a case of whats commonly called prop sing. Prop sing is where the edge of the prop is somewhat defective and causes a harmonic sound similar to one rubbing a finger around a fine wine glass ( only louder). The fix for this is to machine a 45 degree chamfer on either the trailing edge or the leading edge. This can be done in field or by a prop shop, and I think I'm going to have a prop shop look at this for me. I want a professional to measure the prop and tell me what I  have in regard to quality beginning with the bore, and ending withe the blade tips. I went the cheap route when this prop was purchased so now is the time to see how expensive my cheapness actually is.

The cruise down to the haul out yard was done with my 17 year old daughter on a drop dead gorgeous fall day. I recorded a short video of our "three hour tour" so that when the winter blues has found me, I'll have this nice video reminder of a great day to cheer me up. 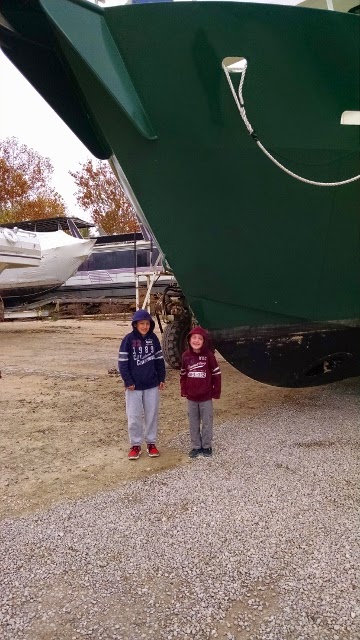 There are some big projects that need to be done on the boat build this winter to get her to a more finished state, but they will have to be worked in with some renovations we'll be doing on the house. My goals for the boat build this winter are to install the mast and boom so we can carry a dinghy on the roof. Complete the hydraulic system so I don't have to  hoist the anchor by hand next year and also have the bow thruster operational. The air conditioners are on board, but have not been hooked up, so that's a biggie on the lists. While I'm up on the lid working on the mast, I also want to fabricate the  hand rails for the salon lid.

The next weekend will be spent winterizing her, and after that a few projects around the house need to get finished. We have plans to take a few extended cruises next season, and getting my list checked off is going to be tight given that my launch date is only seven months away. Sound familiar?