Winter is hanging on to our part of the world and the paying work I have going on or scheduled has been halted.  This makes things good for working on the boat but not so good for paying bills. My guilt level stays low as I'm able to get work done on the boat with lumber that cost me next to nothing. All the lumber I"m using on the interior was harvested from my acreage and milled over a year ago. This is the only way I can afford to do this since Cherry lumber in my part of the world is selling for $7.00 per board foot. 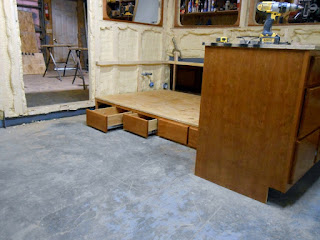 With the galley now finished I've turned my attention to the dinette. The dinette is on the port side between the galley and the aft bulkhead. The dinette table will collapse down and convert to a double berth. The double berth will be about 6'3' long and 44" wide. 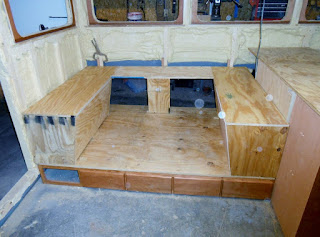 I raised the dinette platform off of the salon floor eight inches. Eight inches is right on the border on being an uncomfortable step regarding height. The platform was raised so that the space under the platform could be used for drawers, and a chase for the duct work feeding the salon and the wheel house. The bench's for the dinette will also double as lockers for the boat's life jackets. The port side fuel fill and vent connections will also happen under the dinette bench seat. 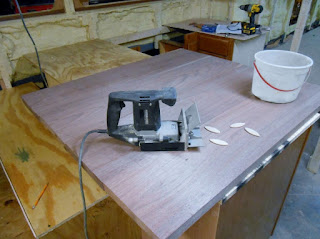 The plywood seats you see are not the finished seats rather they are framing grade plywood I used to mock up the area. I started with rule of thumb measurements to see how things felt, and planned on adjusting as I went. The only adjustment I made was to angle the bench seat riser inward two inches to give ones feet more room. That two inches makes a huge difference in how comfortable the seats feel. Until the boat build, I've never been one to mock t hings up, but to tell you the truth, mocking things up has been pretty useful. Before I committed to cutting the dinette table, I wanted to make sure everything worked and felt good.  The finished elevation of the seats is 17" above the platform and the width of the seat is 16". We're planning on seat cushions, so I'm going to lower the seat two inches to compensate for the foam. As you move forward, the boat gets wider so the dinette seats follow this flare as does the dinette table. 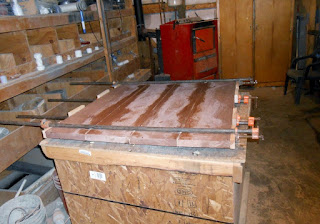 The only real bug in the dinette was the collapsible table support. I went with a commercially made pedestal that is a half way decent unit. The problem was that the pedestal is that the stanchion finishes out 6" below the deck  when the table is collapsed down. In order to make that work, I had to alter the center drawer. I kicked it around for a few days and decided the best fix was to header off the back of the drawer to allow the stanchion to slip passed it. 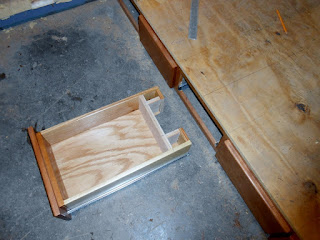 By simply re shaping the drawer, I did not  have to mess with the glides, the drawer unit bulkhead, and the drawer unit framing. I was also able to keep the table pedestal in the  center of the dinette, which was important for stability. It was a easy solution that no one will notice. 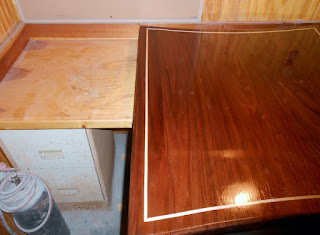 Most of the finish wood in the salon is Cherry. I had been digging through my stash of Walnut when building the island for the  house, and came across two boards that were 1 1/2" thick x 10" wide. They were choice old growth Walnut with almost no sapwood. The boards were jointed straight, and edged glued with #2 biscuits for reinforcing. Personally, I think biscuits add a lot of strength to this joint, and are quick and easy to install.The Walnut boards have been sticker ed in the loft for about 12 years, and because they were old growth and flat when dried, they required minimal planing, and I was able to get a finished thickness of 1 3/8". On the last boat we owned, the dinette table was cut square and was a fuzz uncomfortable in regard to  how close the table edge was to the seat edge. I decided to curve three sides of the table in two inches to give one some relief, and also give the top a little interest. Now that it's all said and done, I like the curve, but I could have made it less slight... say about an inch. I'll have to do something in the seat riser for the top to land on for creating the berth. Since I was giving the table some interest with the curves, I decided to take it a little further and  inlay a band of Tiger Maple around the edge. The Tiger Maple band is 1/4" wide x 3/16 deep. The Tiger maple is bright white, and helps breaks up the size of the top. I was also going to inlay in a compass rose in the center of the top, but decided I had done enough and wanted to avoid making things look busy. I might do a compass rose in the wheel house table. The pictures really don't do the top much justice as the contrast between the Maple and Walnut is pretty choice. What really makes it interesting is the brilliant white radial bands of the Tiger maple and how it pops with the gloss finish. It's a pretty piece. Deciding how to treat the table edge had me thinking on it for a day or two. I had the choice of lightly easing the edge with sanding, leaving the edge sharp, or rounding it over with the router. I decided to round it over with a 3/8 bit, and am  happy with how it feels and looks. Because the top is 1 3/8" thick, the 3/8" round over does not overwhelm the edge. 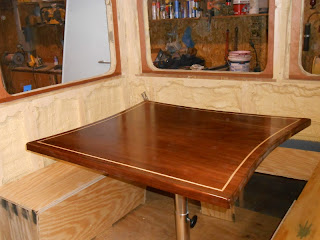 The table top on the pedestal is pretty stable, but it could be  more so. Now that the measurements, elevations, and overall sizing is good, I can commit to building some finished seats. I still have to give myself wiggle room as some measurements are going to change once I land the super structure to the hull. I'm not talking anything drastic, but a 1/4 or 3/8 is no out of the question. The order of assemble at the launch site once she's ready to accept all these cabinets will be to install the dinette first. I built myself in plenty of room as you head forward in to the galley and can adjust as I need in this area.

I'm not burned out on case work just yet, but I think I'm going to run some wires for lights and switches before I tackle some of the wheelhouse cabinet work. Now that I have the salon darn near figured out and finished, locating the various lights, and receptacles is getting easier.

Drawers are a lot of work. On more than one occasions I've heard others say that a way to gauge the quality of work  being done on a project is to look at doors, drawers and stairs. Making drawers, doors and stairs look good requires some patience. 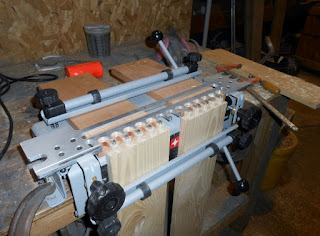 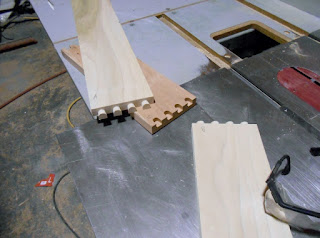 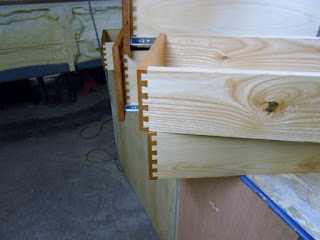 I used some of my Cherry to build the drawer  half blind drawer front. For the sides, I used Ash which I have had in the barn loft for twelve or so years. The back of the drawer is 3/4" Birch plywood. The bottom of the drawers is 1/4" Oak or Birch plywood ( whatever I had in the  barn). I planed the Ash sides to 5/8" thick just because I like the look the thinner stock gives, and I made the Cherry front 3/4". The decorative front of the drawers is also 3/4" Cherry  that I rounded over the edge with a 3/8 round over bit.

The Porter Cable dovetail jig is a nice tool. The drawers work best if you keep the height of the drawers in one inch increments the add a 1/4". So drawers with heights of 3 1/4", 4 1/4", 5 1/4"  and so on work the best. It's not a deal killing act if one doesn't build to these dimensions, it's just that the half pins look best and centered by sticking to the whole plus 1/4". Success of building a drawer is good layout, and making sure all your cuts are perfectly square and all stock is jointed straight and planed flat. I have a half way decent miter saw, but I still prefer to make all my critical cuts on the table saw using stops to make sure all my stock is exactly the same length. There's no mistaking that the table saw is the work horse of the shop. 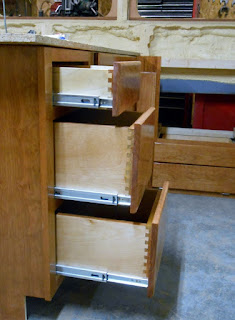 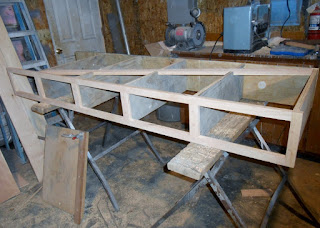 One of the center pieces of the Salon is the dinette. The dinette has four drawers under it and also has the chase way for the wheel house air conditioning duct and the salon air conditioning duct. In order to keep things moving along, I decided to build the dinette drawer unit as a modular piece. Because I am going to be  moving the drawer unit to the launch site, I had to be able to keep it square. In order to do this I let in a diagonal brace gluing and screwing it in place. The hardware I'm using won't work right unless everything is square and true. 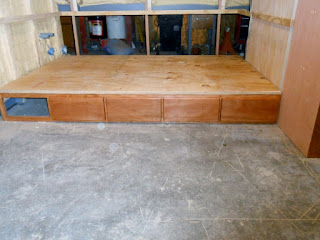 Like most everything I've been doing on the build, things are much easier since she's still in the barn. Having all the cabinet and case work now complete, while it took a few weeks in the barn, saved me a couple of months by not doing it at the launch site. I think my modular plan is going to work.

Now that the drawers, and cabinets are completely finished, the next item on the to do list is the dinette itself. The dinette table is going to collapse down to make a bed, and will be large enough for two to sleep in.

Another builder I follow is working on his building the sail rig of his 75' schooner named Phoenix. He has a lot of nice colloquialisms, and one that fits what I'm doing is " this is not a how to do this, rather how I did it".
This for sure describes what I have happening on my boat building adventure, and I think I'll be quoting James again in he future if it's OK with James.