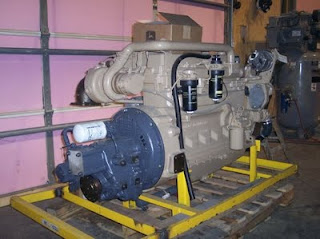 Being an excavating contractor has given me reason to be very familiar with diesel engines. A gasoline powered engine has no business on a boat like this so the choice for diesel was one of my easier decisions. I own and operate CAT powered equipment and have had very good luck for the most part in regard to longevity. I began my engine choice with the power requirements of the boat as recommended by the designer ( 120-175 hp ) and began looking at various manufactures. I looked at CAT, Deere, Cummins, and Yanmar. I chose to go with Deere engine model 6068TFM.

I chose the Deere over the other manufacturers for a few reasons. Deere was the only engine in this horsepower class to offer wet cylinder liners. If I ever have a catastrophic engine failure I could re build this engine inside the boat as I would more than likely be replacing cylinder liners vs having to remove the block to have the cylinders machined ( as with all the other 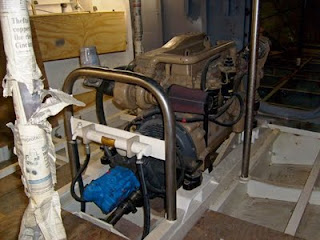 manufactures engines). The Deere engine was also the only engine not to be computer controlled in this class. The only electronic part on the Deere was the fuel shutoff solenoid. Deere has a solid reputation in the Marine industry and parts are readily available throughout the world. I'm not saying anything bad about any other Manufacturer, but for simplicity and ease of possible future repair work, the Deere made the most sense for me.

Deere has a rating scale for horsepower output calling the rating M1 through M4. The M1 rating specifies the engine running at continuous duty generating 154 hp. The M4 rating is for one hour of wide open throttle once every 12 hours generating 225 hp. At 1600 rpm the engine will burn about 2.4 gallons per hour moving the boat about 10 miles translating into approximately 4 miles per gallon. Even though this is a full displacement hull, I'm thinking 4 miles per gallon to be wishful thinking, but I'm hoping I'll see 3 mpg. With my 1400 gallons of fuel ( 4 integral tanks) I should see a range on the dreamy 4 mpg of 5600, but I expect a realistic range of 3500-4200 miles with a fuel burn of 2.5-3 miles per gallon. I'm a boater who likes to travel slow a watch the world go by. I'm more interested in fuel savings than my ability go get someplace an hour early. I don't want to abuse the engine by running her to lightly as I understand that diesels are happiest when they are feeling a little bit of a load, but I also doubt one will catch me running wide open too often.

My main engine will have dry exhaust exiting the boat through a centralized stack out through the cabin roof. Fresh air for the engine will also intake via this central stack albeit a second compartment within the main stack. Cooling the main engine will take place via a Keel cooling system. Instead of taking in sea water to cool the engine, I'm using a grid type cooler welded to the hull that will act as a radiator. Keel cooling was another decision that I researched and decided on this method for it's pure simplicity and reliability. Most of the commercial boats out in the world use keel cooling as it is extremely robust and reliable. Keel cooling and steel boats seem to go hand in hand.

My transmission is a Twin Disc MG 5050A. The gear ration is 2.05:1 and I have a 5 degree down angle on the output flange. I ordered the Twin Disc with a PTO to power my hydraulic system. On the installed picture of my engine you can see the Eaton load sensing variable displacement pump bolted to the back of the Twin Disc gear. My prop shaft is 2" Aquamet and I went with a 4 blade 30" prop with an 18" pitch. The engine is standard rotation ( counter clockwise) so that makes the propeller a right handed prop. The prop shaft seal is of the drip-less variety. I used Vesconite for both my cutlass bearing and my rudder bearings. Because of the length of the prop shaft and wanting to stick with the rule of thumb for bearing spacing and shaft diameter, I added a pillow block bearing to carry the shaft between the stern tube and the coupler. I'm intending on installing line cutters on the shaft, and a drive saver type coupler.

I'm thinking of adding another handrail around the engine to help me walk through the engine room. As I have it set up now there is a natural flow as to how one grabs the upright, then the "U" shaped rail, but I do think it would be safer and if a horizontal rail were added between the upright post and the "U" shaped rail to witch the tranmission cooler is bolted to. I am also giving serious consideration to constructing a sound shield for the engine. The sound shield would give the engine room a more steralize look, but it would also make for a very quiet boat.

Conall
Posted by Conall at 5:56 AM