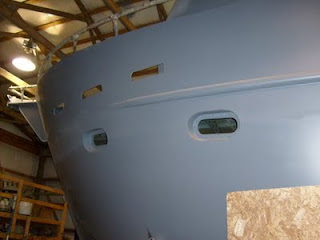 The phrase "fairing the hull" took me a while to figure out it's origin. My interpretation of what is fair is just that... it feels fair. Running ones hand across the hull sheathing reveals more than what your eyes can see and as you keep running your hand across that hull skin you start to get a feel for what's fair. Fair is not perfect and fair is not feeling bumps and gouges in the metal... fair is fair...it feels pretty fair. Sort of like how Manana does not mean tomorrow, it just means not today.

I bought my steel wheel abraded, primed and plasma cut. The wheel abrading removed the mill scale and left a good profile for the primer to stick to. I'm building inside so rust has been a non issue for me and my original primer has remained intact. I started the fairing process ( above the water line only) by grinding all welds smooth. I also hit some of the "weld through" with a grinder if the bumps felt abnormally high. Weld through are areas where the metal pushed out from the welds I created welding the longitudinal stringers to the hull sheathing. After I had all the grinding done I spot sand blasted all the grind marks, rub rails, and any spot that had rust blooming. I then gave the whole hull a light blasting to tooth up the existing primer. I blew off the hull with compressed air and applied three coats of epoxy primer alternating colors between the coats ( white and gray). I then began the process of mixing epoxy ( Gougon Brothers) fairing compound and filled all the areas I had ground such as weld seams and deep weld through marks. After multiple applications and sanding of those areas I sprayed one more coat of epoxy primer then gave the hull two coats of high build primer with the tendency to lay it on thick. 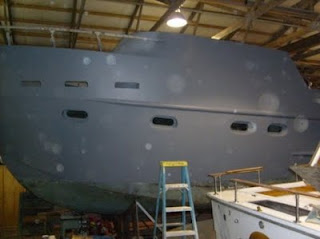 High build primer is like liquid filler putty being extremely easy for one to sand. Using a 30" flexible sanding block and rolls of self adhesive 80 grit 2" wide sand paper I sanded the hull. The high build primer shows every little dip and doodle in the hull. While "long boarding" the hull I'd find areas where I'd sand back into the metal ( very high spots). If these areas were really high I'd hit it with a the grinder, re blast, re prime with epoxy, more filler if needed, more high build, re sand. I really did not use much filler as the hull was very fair when I began. Most of the filler was used up creating a smooth transition from the hull skin to the rub rails, around the port lights, and in the area of the freeing ports and hawse holes. Once I was pleased with the lo 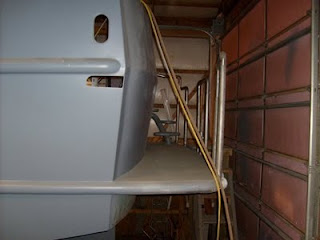 ng board sanding I blew off the hull, vacuumed the hull, wiped her down with tack rags and applied two more coats of epoxy primer to seal the high build primer.

I faired the hull one side at a time, working at a pretty steady rate since I was doing this over the winter in the shop. Each side took two months to complete and has landed on the top ten most nasty jobs to date.

Having now looked up at the hull thousands of times in varying light I have found a few areas that will need more a little more fairing before I apply the topcoat. I'd guess I'll have two more days in fixing some of these areas so I don't consider them a big deal as most will just involve some sanding and high build primer. My future plan for the top coat is to scuff the few areas that need attention, epoxy prime, high build, sand and repair, more epoxy primer. The whole hull will get a good washing, a scuff with 80 grit, one more coat of epoxy primer, then I'll spray the top coat.

Conall
Posted by Conall at 9:02 PM