Winter is not wanting to let go of our small Ohio river town, so no work has been finished on the roof of our boat. As I sit here and type these words, a forecast for 7"-11" of snow, high winds, and close to zero degree temperatures is playing from my radio giving us the promise of an interesting day tomorrow. The mid range forecast  has temperatures staying in the teens and low 20's for the next ten days, so the snow we're going to get tonight is going to stick around for a while. "In like a lion, out like a lamb" was how March was described to me while I was growing up. 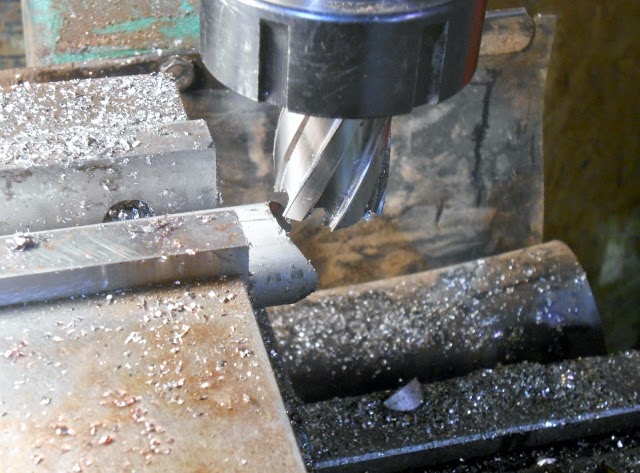 So while continuing  painting rooms in the house, I've managed to get some boat work done in the shop with material I've had stockpiled. The handrail fabrication was the first job I wanted to get finished, and for the most part, went pretty smooth. 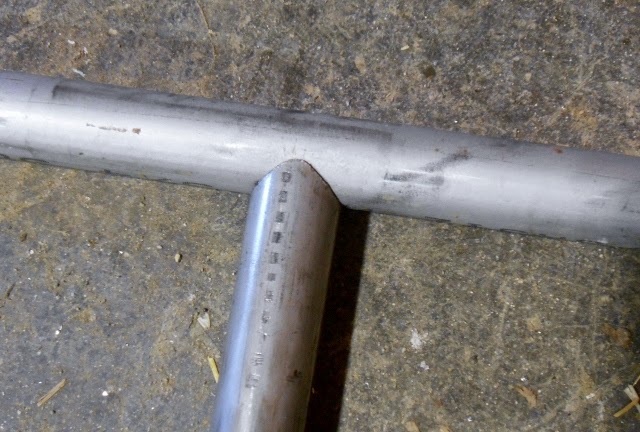 The handrails are made of 3/4" schedule 20 stainless steel pipe. I want to paint the rails, and while cost could have been  lowered with mild steel, using stainless pipe will be better in the long run in regard to maintenance. Because of cost, pipe was used vs tube, and because of weight, thin walled pipe was used. Wall thickness on schedule 20 is about .095 so MIG welding and stick welding is easily used.

The handrail will be 36" tall, with the stanchions being 24" on center. The stanchions centers could have probably been stretched to 36", but 24 is what I laid out when I was framing the roof, and the doubler pads are already welded in place. 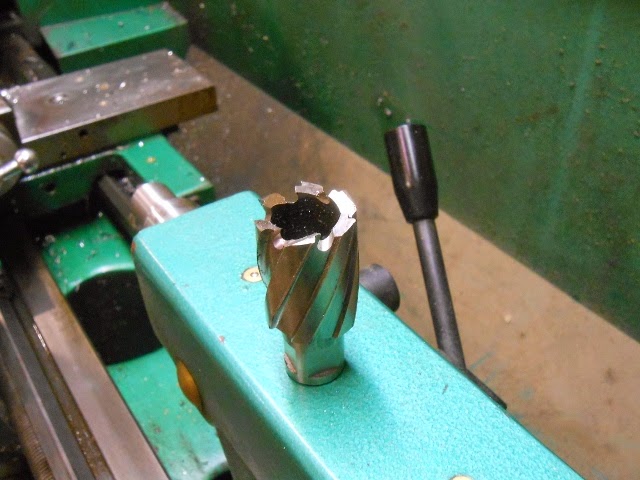 Once I post about the handrail install, you'll see what I'm talking about regarding doubler pads. The stanchions were cut to length on the lathe using a parting blade, and a stop to  make sure they are all the same length. To make fit up idiot proof, I coped each stanchion to fit the rail. Some people call it notching, I call it coping, but what ever you call it, I accomplished this by using my mill and an annular cutter. An annular cutter , or a rotary broach, as some call it is nothing more than the baddest assed  hole saw you've ever seen. The 3/4" shaft of the cutter with flats milled in it, are really designed to be used in a mag drill with it's specific chuck, but I was able to use a collett to hold the cutter in the mill. The pipe is beefy enough to be held in the mill vice, and the key to doing this coping is an extremely slow feed. Rigid holding of the part, a sharp tool, and a slow feed gave me top  notch results.

Because the rail is going to be painted, I was able to MIG weld it. The mast boom is being secured right now by hooking it to one of the cleats use to lift the wheel house last year. I  never got around to cutting off the cleats, and darn if they've not come in handy for securing the kayaks, and in this case, also the boom. 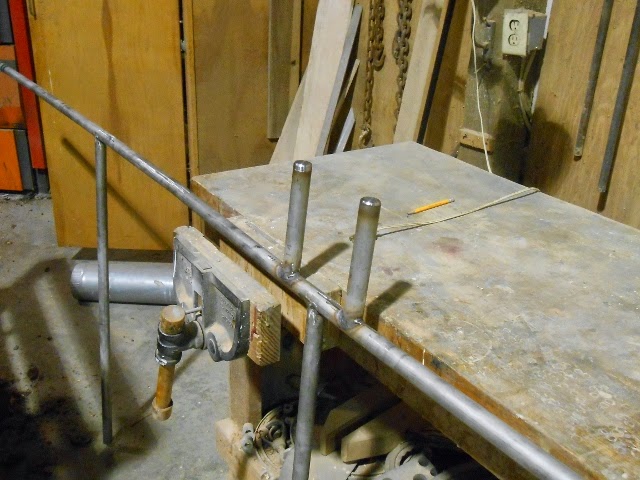 It made sense to me to weld a couple of stanchions to the hand rail over a mounting stanchion to be able to rest the boom and snatch it down with the cable.

Because we're using electric winches to control the load and the boom, a battery box had to be built for the battery. To help keep things out of the weather, I hinged a lid to the box. The box has a partition in it to hold the battery on one side, and on the other side house the motor solenoids, the motor fuse's, and a positive and negative buss bar. 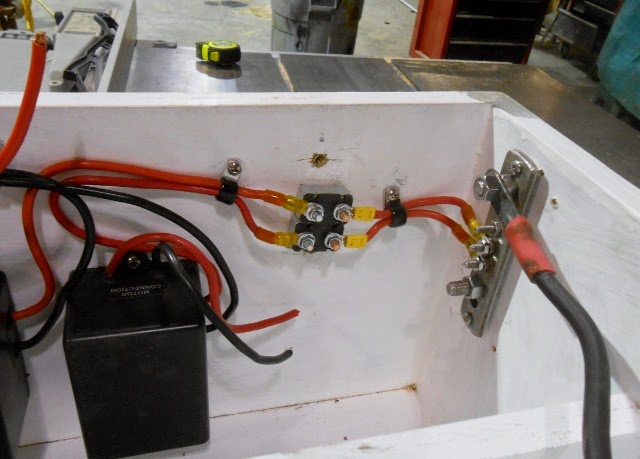 The motor fuse's are 50 amp inline, and came without a cover of any sort. I really did not like having two hot posts unprotected, so I used an orifice shield for pipe to cover the posts of the fuse's . 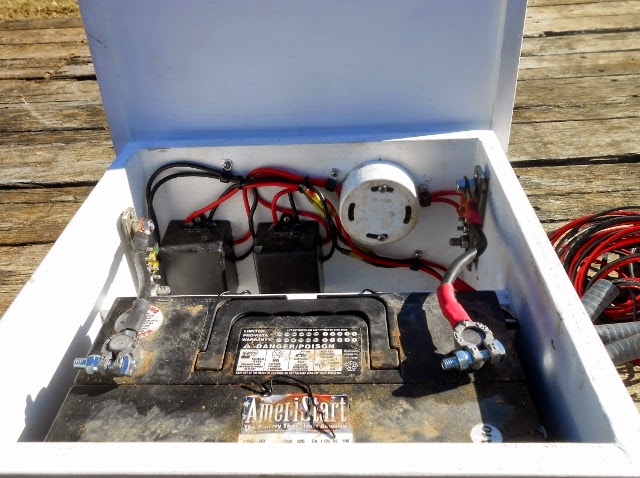 The battery I'm using came out of my "slightly used, but still OK " inventory I keep in the back of the shop, and  is a group 31. This battery is not going to get heavy use, but I still had to decide how to keep it charged. The choices were charger in the wheel house with heavy wires. Heavy wires from the house bank with no battery on the roof. AC wires to the roof, with charger in the roof top box. Solar panel to charge the battery. I chose a solar battery charger. 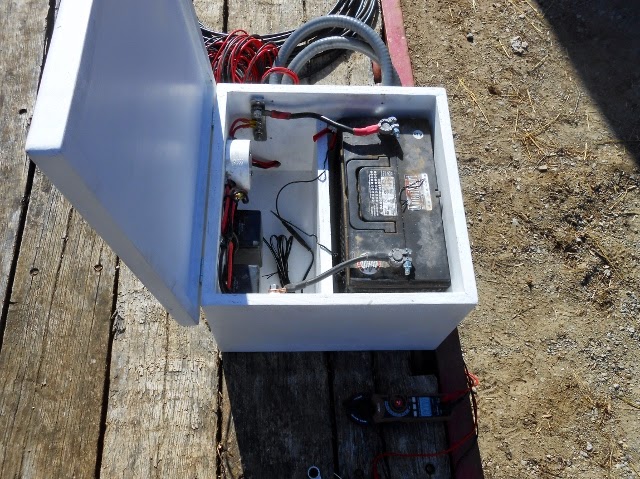 The solar battery charger is 1.5 watt, and it's my understanding that with this low wattage, I won't need a charge regulator. 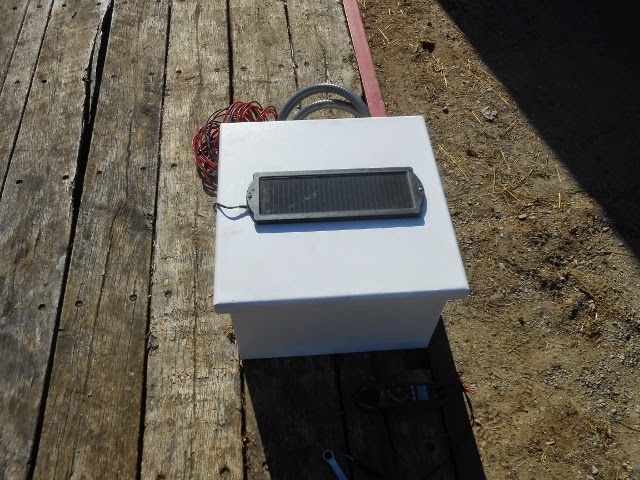 I don't know what type of panel this thing is, but in my shop with the panel just seeing shop lights, it puts out 12 volts. When I move the panel outside and it's shady, it puts out 21 volts. When the panel see's sunlight, it puts out 23 volts. The panel came with a small diode light on it that blinked when it was charging, but that blinking caused the voltage to pulse erratically when no sun was shinning, so I took the panel apart and cut the wire lead to the diode light. With the light not blinking anymore, the voltage was steady. I might as well say now, that this panel cost $14.00 , and has nothing but great customer reviews. For the three days I had it connected to the group 31, it held the charge steady at 13.2 volts.

The whole electric winch thing might come back to bite me in the butt some day, so I should probably have a few manual blocks and tackles on board. But truth be told, for how low the winch's cost, I should probably have a spare winch on board. While the winch's are of low cost, they seem to be put together well, and appear to be  weather tight. Once they're wired and operational, I'll probably cover them with something water tight, and keep things up to snuff. 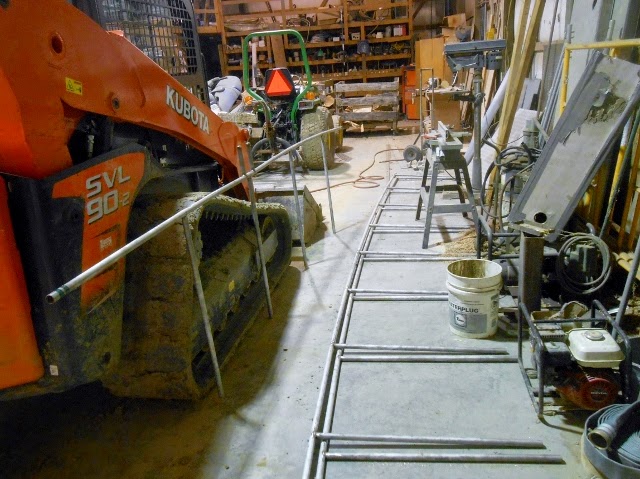 In two weeks, the boat yard opens for season hours. In ten weeks, the harbor opens for business , and we'll be in the water. 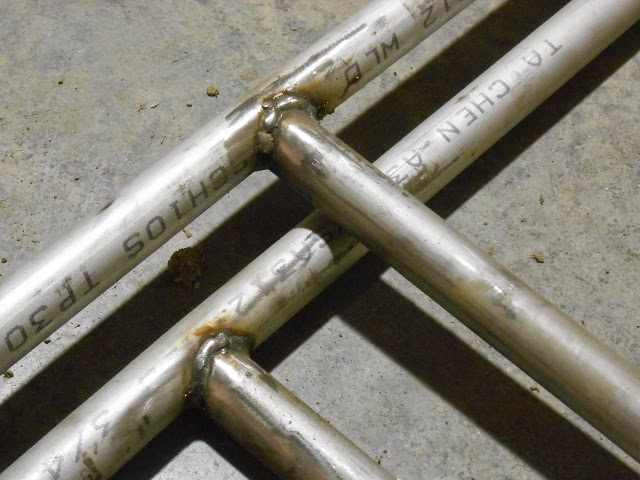 There's no way I'm going to have my off season boat "to do" list completed, but that's OK. D day for me to have the real list complete is late June, when the plan is to motor to Kentucky lake.