Along with no ice on the boat roof, and a break in the weather, I decided to install the mast. Unlike most things boat building, this particular phase of the project actually went fairly smooth and took about as long as I figured. Getting all the parts and gear loaded on the truck took as much time as the actual installation. 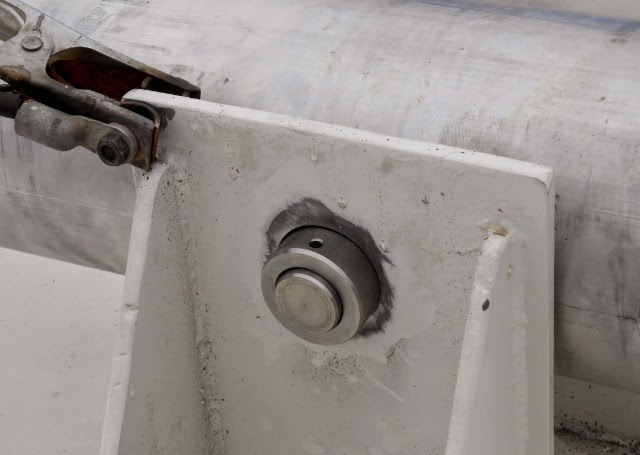 I don't know what the  mast weighs, but I'd have to guess around 150 lbs. Getting it up on top of the boat was a simple matter of leaning it against the boat above the swim platform and with me on top, and with my helper lifting from the bottom, we quickly had it on the roof. The layout work for the pins and bushings was spot on, so it was a simple  matter of first installing the upper pins and bushings, heavily tack welding the bushings ( with the pins in place ), standing the mast up, then heavily tack welding the lower bushings in place. Once everything was tacked in place and I verified the pins were not in a bind, it was final welded with a stick machine. 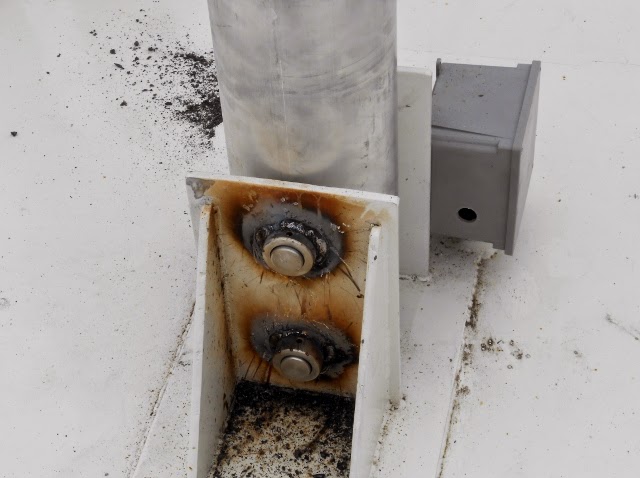 If push comes to shove, a stout person probably could step the mast by himself.  Once the mast is standing, it's just a matter of getting the fore and aft thing just right so the bottom locking pin can be pushed home. I should probably turn a pin with a heavy chamfer on it so it's self aligning and can easily be driven home while one person both holds the mast up and drive's the pin home. For the sake of safety, it's a two person job, but like I said, if push comes to shove, one person probably could handle it. 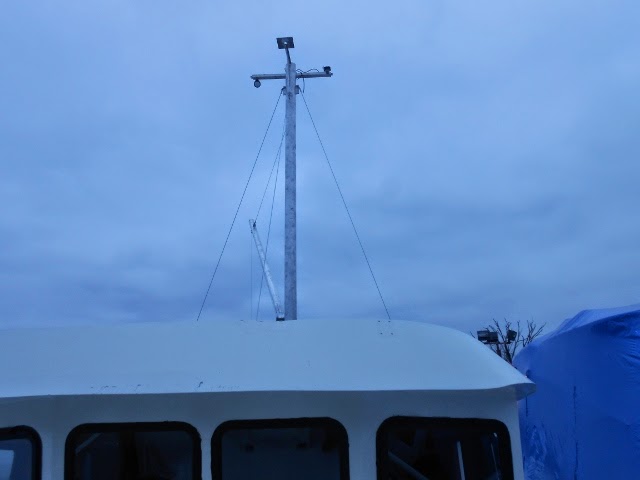 Having never really been on a boat with a mast before, once we had it welded and standing in place, it seemed ginourmous. I know 20' isn't squat when talking about sailboats and  mast, but standing on my roof while looking up at the mast, it seemed to be way up there. With the mast standing unstayed, and me pushing on it, there was a little flex in the framing. The turnbuckles I used were capable of taking up 6". Pulling the cables as tight as we could by  hand, then swagging the thimbles to the turnbuckle eyes left what appeared to be a decent sag in the cable. Once we had the three stay cables rigged, I was impressed by how little it took to tighten them up. I should  have probably measured, but I don't think we took up more than 1 1/2" before the cables were as tight as I thought they needed to be. I'd like to hear from one who knows about how tight these cables need to be, but to me they feel pretty comfy. The two shroud cables are about five degrees off of 90 degrees to the mast, so the fore stay cable pulls against the shroud cables. Shrouds are athwart-ship while stays are fore and aft. With the cables tensioned, the mast now felt rock solid. 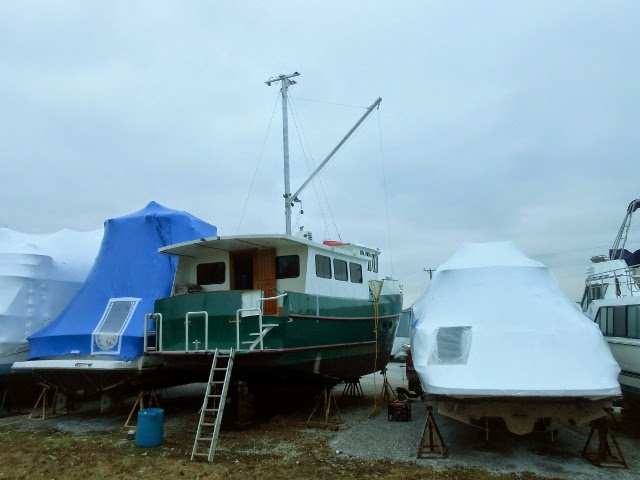 Having spent the last three weeks fabricating in the shop and dry fitting everything together, getting the boom in place and rigging the electric winches took practically no time at all. Using a spare battery from the shop to temporarily electrify the winches, we were finally making things go up and down. We played around for a short time and hoisted the 200 lbs generator to the roof and back down. The winches are remote controlled, and have different frequencies, so that's going to make things easier. 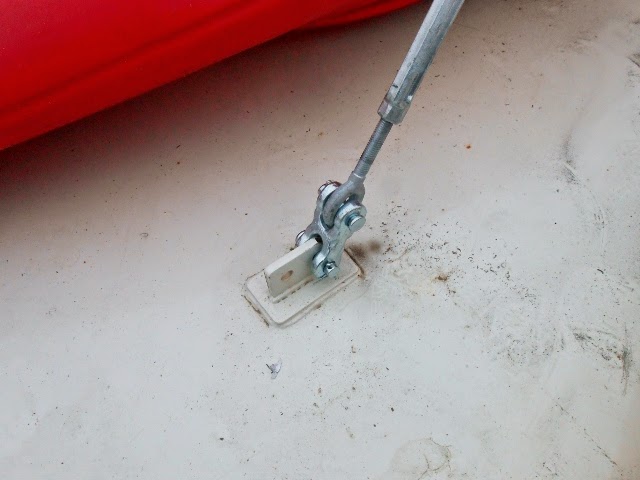 Because of the winch location the boom cannot be raised plumb to the mast. The  boom goes to within maybe 5 degrees of being plumb to the mast, and that's plenty high enough. When the boom is about as high as it can go, when moving it to starboard, it will hit the boom winch. This is really not a big deal as the boom will probably never be this high while lifting a load, but it's something to be aware of.

To  wrap up this project, I need to build a dedicated battery box and decide how I'm going to charge the battery. All the solenoids, and fuses for the winches will go in the battery box. I'll probably build the box big enough to hold some tools slings for lifting.  I'm leaning towards a dedicated winch battery vs pulling heavy wires from the main distribution panel.

A wire chase is already framed from the wheel house to the mast step, so getting wires to that point will be easy. I have a 6x6 splice box already on the mast step, and this will be my transition from interior to exterior. I'll make water tight connections in the splice box and bring cord out of the splice box using cord grips. I don't think I'll be able to do this with the radar cord, so a custom split cord grip will have to be used. 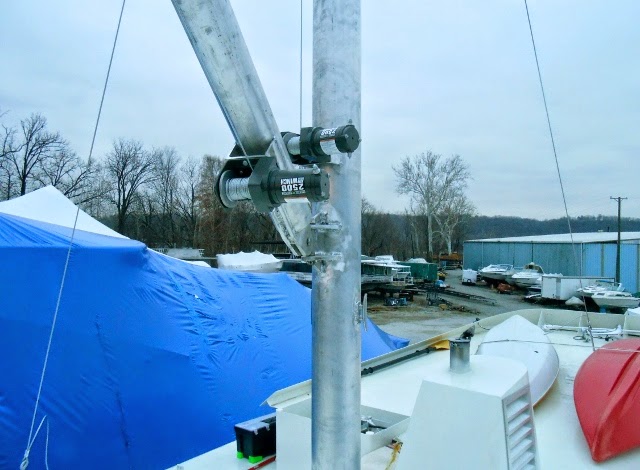 The heavy work is finished on this project and I'm pretty  happy with how it's turned out. I'm going to finalize fabricating the wiring harness's for the winches and getting a battery box built so I can use the hoist for the hand rail build. most of the hand rail will be fabricated and welded in the shop so I'll use the boom to hoist the three sections along with holding them in place while I weld the rail to the roof. It will also be nice being able to hoist the welder to the roof. Heck I might even bring the big MIG welder down to do this job now that I can get it along with the large tank up top.