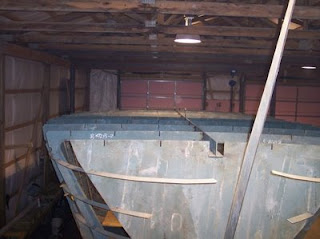 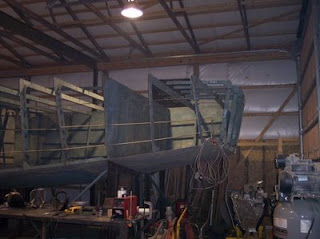 Once the center seam of the hull was tacked together I began standing the frames and tacking them on their respective reference line. Having welded the flat bar to the inside of the frame made the frames mu 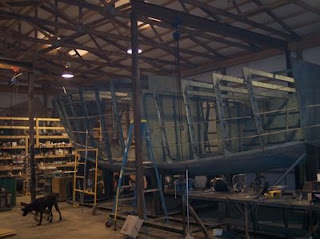 ch more easy to deal with. I started the framing on station #9 witch is pretty much in the center of the boat where the bulkhead divides the cabin space from the engine room and from here I worked fore and aft. I took some bad advice from a so called boat builder and welded the center seam solid before installing any of the frames and from that moment on I fought some unnecessary battles with the metal. If anyone is contemplating taking on a project like this ...ONLY TACK WELD UNTIL THE HULL IS COMPLETELY SHEATHED. Sorry for the loud typing, but I am kicking myself in the ass for making this mistake.

The framing is pretty much straight forward. Put the frame on its line and tack weld it to the bottom hull plate. Find the correct longitudinal stringer, and put it on it's marks for the particular frame you are working on, and tack it in place. I had to do some temporary bracing to hold the frames in place, but after a few frames were installed along with a few longitudinal s, the framing went pretty smooth. Following the advice of the designer, I held the longs a little proud of the frames as the hull plating does not get welded to the frame, rather the hull plating gets welded to the longitudinal. If my memory serves me I believe I held the longs one diameter of my .035 welding wire away from the frame.

Once the framing got under way and progress was being made I found it hard to stop working. The boat is starting to pick up some weight at this point and in my haste I ignored the fact that the building jig needed to be braced. At on point the jig looked ready to collapse and had shifted off of it's marks in relation to the hull plating. I stopped what I was doing, lifted the welder off of the hull and spent the next six hours bracing the jig and getting it back in alignment.

Conall
Posted by Conall at 5:49 AM