Of course, in all things boat building, this job took about double the time I figure and posted about in my last blog post. The reason for the underestimated time was worthy of the extra time in my opinion. 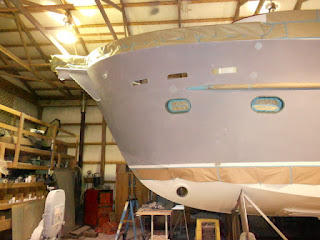 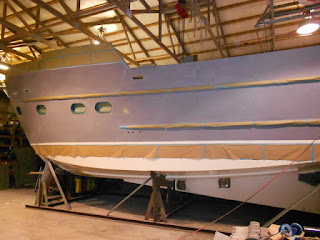 When I had completed the body work on the hull, and sprayed the last coat of primer, I had thought I had the sanding to a good enough quality to paint. That's kind of a loaded  response, as the primer was probably smooth enough to paint, I just wanted it a bit smoother. The problem I was fearing was that not having the primer perfectly flat would cause the top coat to have some blemish. Without more sanding, the top coat would still be shiny and pretty, but the blemish I was worried about would make it a problem to revive the finish years down the road with polishing and wax. The primer needed to be flatter. So given the lessons learned on the transom and wanting a more user friendly finish, I decided to re sand the hull. 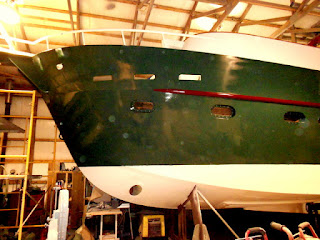 Sanding the hull ( I'm only talking about the port side today) to 320 grit was not to bad of a job. It's kind of hard to describe what I'm talking about, but once you start to sand with 320, minute high spots in the primer start to appear. More sanding flattens the primer, and the high spots disappear. The primer starts to get a shine to it, and it is almost as if it is being burnished by the finer grit sand paper. 320 seems fine enough for a boat paint job, but I'm sure body shops working on cars would take primer to at least 400 and more likely 600. There are for sure better ways to spend ones time than sanding primer so I approached in my not getting in a hurry way of doing things. Spending an hour  before leaving for work in the morning and a hour after work in the evening, helped me keep the patience  needed for this type of work. 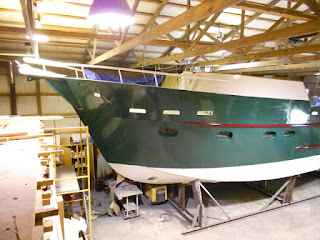 Wanting to break up visual size of the hull, I decided to paint the rub rails another color. The lower rub rail extends around the back of the boat and becomes the swim platform. I don't know how many of you have painted the color red  in your house, but I can tell you that I now know that red industrial paint has the same problems as red house paint. You have to prime anything you intend to use red paint on. I had already painted the swim platform white, and the swim platform part of the rub rail green. I re sanded the swim platform rub rail, taped it off and began spraying red over the green. The green makes the red a few shades darker than the other ( primed) rub rail. The few spots on the swim platform rub rail  where I sanded through the green in to the white primer, the red does not cover the white. This part of the rub rail is going to  have to be sanded, primed, and re painted. Truthfully, it doesn't look that bad, but it is noticeable enough that I want to re do it.

Taping off the hull took also took quite a bit more time than I had figured. I probably have five or six hours invested in taping. Once I had an area taped, I wiped it down with a tack cloth to remove the dust. I started taping on Thursday night, and finished it Friday after work so I would be ready to spray Saturday morning. 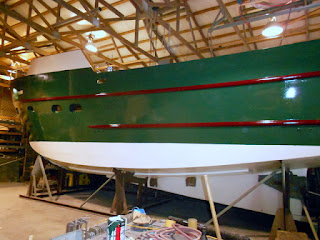 The weather here has suddenly turned hot, and Saturdays forecast was for temperatures in the 90's. Figuring it would take four hours to spray the port side, I wanted to be spraying by 7:00 am and finished before the 90's found their way into the barn. As I began spraying, I immediately had an issue with the paint pot which took and hour to resolve. While I finally got the pot working correctly, it caused me to have a less than ideal finish on the area under the lower rub rail, between the water line and the rub rail. I'll have to do some paint repair in this area, but now that I know what's involved in doing that, I'm not to worried about it.

Getting three coats of paint on her requires more of the elusive patience, and keeping track of where one is in regard to where one just sprayed. The first coat to hit the metal covers the primer, but not too heavy. The second coat goes on while the paint is starting to get tacky which allows the second coat to cover while not  sag. If the spray gun volume and fan width is tuned in right, the second coat is probably good enough to call the area finished. The third coat gets risky, because you now have some thickness developed and the paint wants to start sagging. The second coat needs to be well on it's way to being tacky, or you could develop a sag on the third coat. You have to wait for the paint to tack up to accept more material, but you can't wait too long or it will to dry and you get dry spots where you start and stop the  spray pattern. I'm using up to 10% by volume of reducer in the paint, so it tends to dry quicker. I have one spot below the bulwark at the wheel house, where I had a drying issue on the third coat and I'll have to polish it to blend it back together. This is where sanding the primer perfectly flat pays off as it makes polishing much easier. 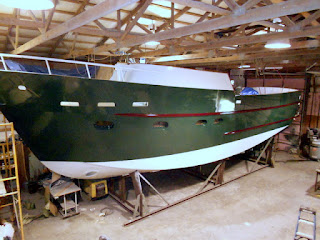 I still have to finish paint the starboard side, so I'm starting prep work on it this week. Given how busy I'm getting with work, I doubt I'll have it completed by next weekend, so I'm giving myself another week to call the paint work a wrap. I'm big time happy to see so much shine when I walk in to the barn but I'm more happy to have reached this milestone.

Cheers
Posted by Conall at 7:57 AM