I've finished the aft deck and swim platform, and can check it off of the soon to be developed list. 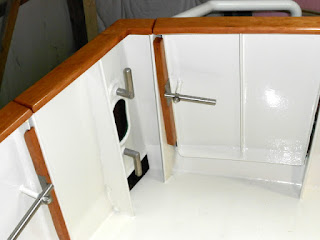 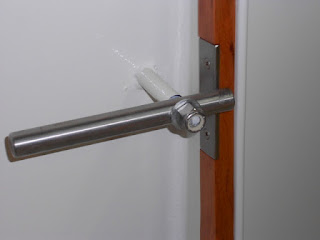 By the time I fabricated the jamb and the stainless steel keepers,t he two bulwark doors took almost a day to hang. I built these two door handles a little different than the Portuguese bridge door handle, and they were much more simple to install. I had allowed these handles to project more in to the deck area so I had more meat on the jamb, which let me do the installation without mortising the jamb. I'm totally happy with how tight the door closes and how the handles look. I'm glad I went the extra effort with this style vs going to a big box store and using an off the shelf gate latch. There are two doors on the aft deck. If we are tied to a dock on the starboard side, we'll step up and enter the boat via the starboard door. If we are tied off on the port side, we'll step on the the swim platform and step up the aft deck using the transom steps. 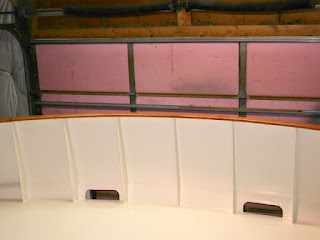 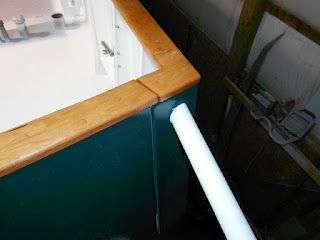 but I did not want trust my ability to polish them bright, and felt paint would be the most maintenance free treatment. I really like the look of bright stainless, but I doubted I could prevent them from rusting. I also painted the stainless steps going from the swim platform to the aft deck. Like the rest of the swim platform and decks, I'll add anti skid once she' ready for launch and I"m not dealing with mud being tracked on deck. I like the green chosen for the hull color but it makes the off white look more like pure white when the two are next to each other. For a comparison look at the off white next to the pure white I painted on the wheel house floor as compared to the off white next to the green. I was afraid to go much darker on the off white for fear of heating the decks up to much. 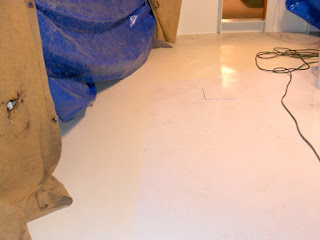 I've increased the size of the aft deck which decreases the size of the salon. Having the covered aft deck large enough for a table and four chairs was more important to me than having the reciprocal amount of square footage in the salon. A lot of living and socializing will be happening on the aft deck, so it's an important space for us. The aft deck will also have a grill, and a hot/cold outdoor shower with a shower curtain. I'll add the shower and wash down hose fitting  after she's at the launch site and I have the salon welded in place. 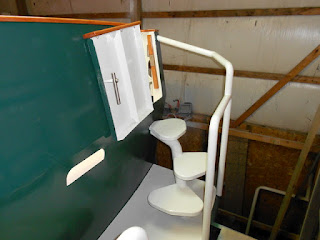 While I've sprayed a fair amount of paint during the build, I am for sure no expert and I'm constantly flirting with the learning curve. I had an issue while spraying the transom which I'll now explain. I used my 2.5 gallon HVLP paint pot to paint the transom. I mixed enough paint to do the job, and had three coats on everything. I still had some paint left over so I figured I try to get a fourth coat. The paint started to run out and the gun began sucking air, which I was unaware of, but I kept on spraying. At first I though I had put the material on to thin so I sprayed the area again ( I spray small areas at a time), but the paint still looked bad so I stopped. After I cleaned up my gear and pulled the tape off, that 2' x 2' area looked like leather, and 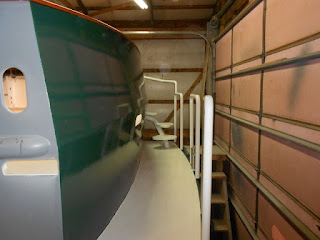 I was bumming.  The problem I encountered  was having the gun suck air caused the paint to dry before it hit the metal giving me this unacceptable texture. The paint was dry and would not lay down. The area is right by the steps leading to the transom door, so I wanted to fix it. Having never repaired paint, I decided to try a small area to see how I could make out. I mean the worst that could happen is I mess it up more and have to re paint the whole transom. Starting with 800 grit wet dry, I wet sanded a 8" x 8" spot, then used 1200 grit and finished with 1500 grit ( all wet sanding). The final step was to use some fine cut polish and a electric orbital polisher, and buff the test spot. I have to say the spot looks amazing. The paint texture is now perfectly flat, and the polish brought the paint to a mirror finish. I actually look like I knew what I was doing.  While the transom has a good shine to it ( except for the bad spot I'm trying to fix), my test spot now looks far superior to any other part of the transom. 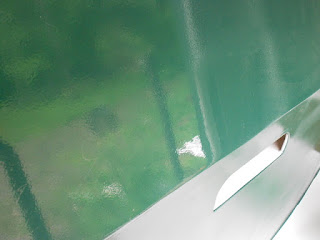 Fixing the bad spot is now going  to make the bad spot the best spot, so I  think I'll end up polishing the whole transom to make everything look even.  I don't want to get in to this habit for the rest of the hull, so I'm content with polishing this area, as this is the only way on and off of the boat. Having a crappy finish on this area will bug me every time I pass by, so I'm fixing it. I took a picture showing the messed up flat looking paint on the right side of the picture and the repaired shiny paint more on the left side.  The key is not letting the paint pot get to low, and making sure you have enough thickness in case you need to do a repair.. I'm not looking for a perfect mirror finish on the boat, but I want it to please me, be easy to clean, and be respectable in the eyes of those who know. 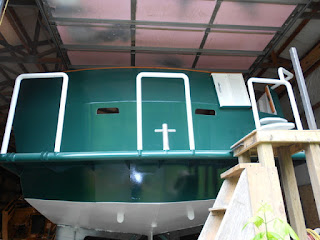 I'm now ready to start work on painting the below the water line area of the hull, but before I do that I have to organize the shop.  Under the boat has been used for storage of parts for the wheel house/salon, scrap metal, spare parts, scrap wood, and a host of all kinds of debris. I have a days worth of making things right, then I can start on prepping this part of the hull. Hopefully, within two weeks, the bottom of the hull is painted and I'll start getting the boat off of the building cradle. Before I can get axles  under her, I have to have the cradle removed and have her sitting on blocks. In the last picture,  you can see some of the below the water line paint I have already rolled on. I'm using a two part paint called Amerlock. Pretty nasty stuff that is too thick to spray so I'll be rolling it on.

Cheers
Posted by Conall at 1:16 PM