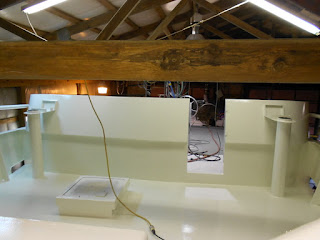 I have finished painting the foredeck, the anchor pulpit, the handrails, the foredeck side of the Portuguese bridge, and the bulwarks. Pretty much, all of the fore deck is finished with paint. I did this on Friday, and due to some family things I have to do this weekend, I won't be able to finish the wheel house side of the Portuguese bridge and the outer deck of the wheelhouse until sometime this week. The weather forecast for this week is on the stormy side, so I'll be able to take off work the 1/2 day I need to finish painting what I did not get finished on Friday.

The fore deck was a lot of work to paint, and used about a gallon of paint. The paint mix is 5:1, so in terms of product used, I sprayed about 1.25 gallons. That might not seem like a lot of paint, 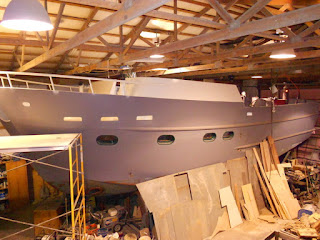 but it is a fair amount given the paint type. The fore deck and handrails is a really cut up area to paint, and was a pretty physical day for me. At the end of the day, I was feeling the workout. This is one of those deals that you can't stop once you get started, so no matter how worn out you get, it's best if you suck it up and finish.

Because I decided to paint the hand rails, I had to scaffold the outside. I have a rolling scaffo 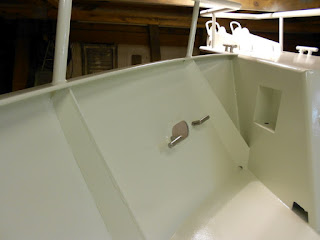 ld I used, but that required many trips up and down the scaffold as I moved around the boat. The rolling scaffold does not fit between the boat and the barn wall, so I had to set up a 16' walk board and a ladder to do that area. Slow, thoughtful movements are the key when working 12' off of the ground lugging around a full paint pot, air hoses and safety clothing. My basic paint plan was the same as all the other painting I did which involved getting a decent first layer of paint on the surfaces, letting it tack up a bit, then come back and apply a second and third coat. With the handrails, the exposed frames of the bulwark, the bulwark cap and underside, the anchor pulpit, hatch, and cabin ventilation tubes, there was a lot of trimming in that had to be done. All of the fixtures that I just mentioned not only required trimming, they also added some square footage. Most of this area was painted at odd angles, on my hands and knees, bent over while avoiding the roof truss's. I now have a better understanding on why certain boats are more expensive to build than others, and why items such as handrails, bulwarks, and the Portuguese bridge add costs to a job. I'm so glad this job is completed.

The handrail is made of 1 1/2" stainless steel with 1" stanchions welded to the bulwark cap. I had intended to hand polish this rail and leave it as shiny stainless. Like I said in earlier post, I had serious doubt about being able to get the polishing job done well enough where the handrail would not be a constant battle with rust. I think I made the right choice in painting it. I'm also happy knowing that when the rail gets chipped, it will not rust quickly due to the stainless.

The paint scheme I'm doing on 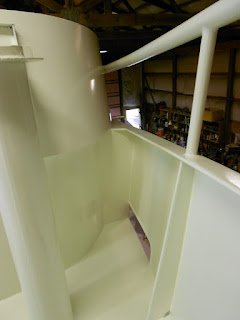 the boat is pretty similar to the picture at the top of the blog. Because of the Portuguese bridge's white color, I carried that paint line around the outside of the hull. It's nice seeing some more shiny paint on the hull as I look up at it from the shop floor.

I'm not to happy about the quality of the finish on the deck. There was a fair amount of grit on the deck from the other painting, so I'll have to take a close look at a re paint. My goal was to get the deck protected w 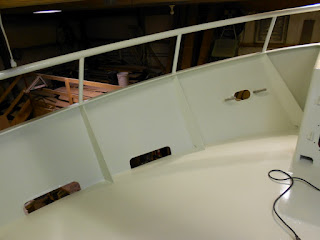 ith that tough paint I'm using, and that's what I did. I plan on doing a non skid deck treatment, but that will not happen until launch time. Given the additional coatings I will be doing on the deck, I think I'll let it go until launch now that it has two coats of acrylic urethane and it can now handle weather and finish work.
Posted by Conall at 8:39 AM No comments: 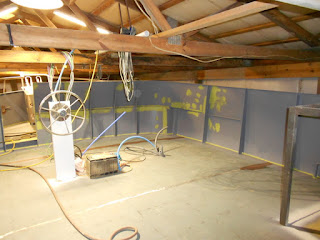 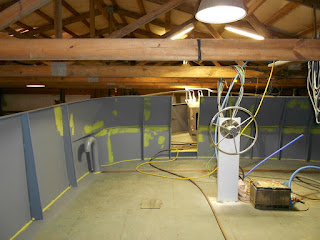 I've been busy with life here at home and have been away from things boat building for a few weeks. I have been making some headway on getting a some paint work done so I'll update on that.

I want to get the fore deck and Portuguese bridge finish painted. I need the fore deck painted to install the forward hatch, and I just want to get things off of the list. Like all things boat building, the fore deck paint turned into more than I had figured. I don't know if projects are turning into more than I figured for, or if I just gave up getting in a hurry. I had sand blasted, primed and scuffed the fore deck last year so a large part of the prep work was completed. I decided to paint the stainless steel 1 1/2" hand rails vs polishing them, so I sand blasted the rails to give the primer something to grab on to. The Portuguese bridge was a mess and had to be sand blasted. I did not have to take the whole thing down to white metal, but at least 1/3 of that area did go to white metal. 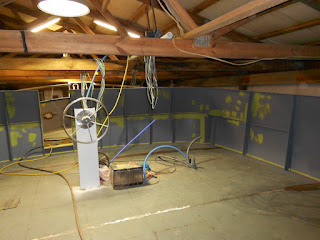 Since I gave up getting in a hurry, I decided to fair some of the fore deck and Portuguese bridge. I ran an epoxy fillet between the bulwark and deck area, and the Portuguese bridge and deck area. I faired away the all the grinder marks and a some a few areas where you could see plate joints. I also faired the large deck joints. I faired the hawse openings on the fore deck where the dock lines will pass through, and the whole pulpit area. All the areas with fairing compound on them will have to get two more coats of primer before I spray top coat paint. I had thought about using high build prime, and blocking the fore deck and portuguese bridge back down, but that's a lot of work, and I don't think a mirror yacht finish is that important for these areas.

The frames that are welded to the decks and b 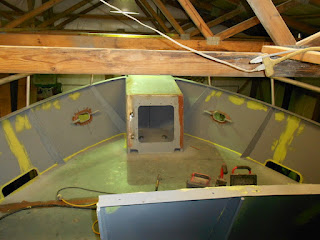 ulwarks or Portuguese bridge will be treated a little differently. No matter how careful I try to get that joint painted I don't think my efforts will be good enough. So for these areas, I'm going to use and automotive paint product called seam sealer. Seam sealer is basically a caulk that will remain flexible, but will allow the top coat paint to stick to it. If you look inside your car trunk or under the hood, you will probably see where the manufacturer used seam sealer. I've seen boats that are framed like mine, and most of them seem to have rust stains coming from joints like this. I'm hoping this little bit of work and money will solve that problem.

After I finish sanding the faired areas, I'm going to scuff all the paint with some 3m pads. I have a hook and loop DA air sander, and if I cut round shape on the 3m pads, I can hook the pads to the DA and save on some elbow grease. Once everything is scuffed, I'll apply the seam sealer then prime the seam sealed joints and all the un primed fairing compound. Once the primer is on, I'll have 72 hours to get the top coat paint on or I'll have to re scuff the newly primed areas.

My goals and schedule of work for the next five months is to finish the fore deck and Portuguese bridge paint, and install the forward hatch. I've made arrangements for a sand blaster to blast below the water line so I can get th 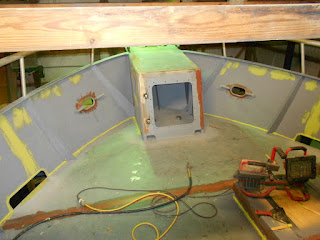 e below the water line area barrier coated. Once that part of the hull is painted, I'm going to scuff the hull and top coat paint it. At that point, the hull will be ready to leave the shop, so I'll be working on getting it on a dolly for the trip to the launch site.

If I want to get her in the water next season ( 2013) I really need her at the launch site by early October. October is the driest month of the year around hear, with that dryness carrying on in to November. October will be an excellent month to weld the wheel house and salon to the hull and have her dried in for the Winter. If I can meet that schedule, I will have the Winter and Spring to trim out the Salon and Wheel house and a 2013 launch will be doable.

I really love the fore deck and Portuguese bridge. The foredeck is large and uncluttered, and the railing is of a good height and stoutness. The Portuguese bridge is of a height that will make all on board feel secure as the boat is on passage. As I stand at the Portuguese bridge while the boat is in the barn, and dream of the future, I can almost see how the sea will look as the sun starts to dip below the horizon. The only problem I'm having with these two areas is that they are a pain in the ass to paint. The barn has 16' ceilings, and these two areas are in the truss's, so one has to sort of stoop/walk to navigate this area. If you were to find yourself working on my build and on this part of the boat, I can almost guarantee you would crack your head numerous times on the truss's. Another week or so of sticking to this less than ideal job, and I'll be able to scratch this project off of the list I have been meaning to write.
Posted by Conall at 5:38 PM 2 comments: