This is going to be the first of a few posts relating to my fuel system. I'm glad I did not bid building this system for someone as I'm finding this job burning up a lot more time and material than I would have guessed.

The first order of business for building the fuel system were installing the fill pipes. I have four integral tanks in the engine room with a capacity between 1200 - 1300 gallons. I have o 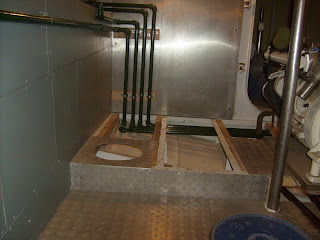 ne 200 gallon tank that I will use as a day tank. The day tank will supply the main engine and generator with fuel. On the aft deck of the boat I'll have two fill locations, one fill for the starboard tanks, and one fill for the port side tanks. Both the port side and starboard side fuel fill pipes have ball valves in line to direct fuel to either the forward or aft fuel tank on each side of the boat. When I want to fill the forward port tank, I close aft ball valve and open the forward valve. Likewise, when I want to fill the aft port tank, I close the forward ball valve, an 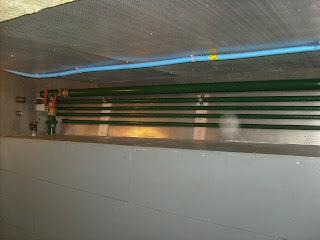 d open the aft valve. When the tanks are full, all the ball valves on all the fill lines are closed. The fill pipes are steel pipe, 2" sch. 40.

The tank vents are 1" steel pipe sch. 40 and will exit the boat with the fill pipes and terminate at the fill stations. 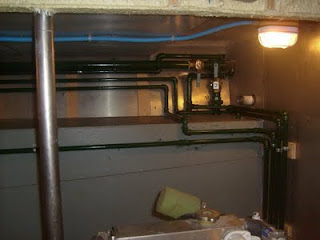 I'm in the excavating business, and I'm always calling to have underground utilities marked before I dig on a job site. The marking companies spray paint the location of the various utilities on the ground using the following colors: red for electric, blue for water, yellow for gas, orange for cable and phone, and green for fuel or oil related. Given I have to paint the pipe to protect it, I have chosen to paint all the fuel related parts in the engine room green.

There is a lot to the fuel system, and I feel as if I got a good start on my first week of working on it.
Posted by Conall at 9:42 PM 2 comments:

I've finished the work in the kids cabin, and I'm moving my tools back to the engine room. All the major wood work is completed in the cabins and bathroom except for the building of the passage doors. I've got to decide on the door hardware before I commit to building the doors. I'm a little burned out on wood work, and a little time away from wood working will do me some good allowing me to finish some of the mechanical systems.

I had a visit from fellow boat builder Brian Russell last year and took some of his comments to heart. Brian is building a Dix alloy sailboat and you can check it out here:Welcome to Odyssey YAchts
While Brian and I were looking over my build he had some concern about the lack of ventilation in my hull. His concern had been gnawing at me for a while and so I started to make some choices about how I was going to keep air moving in the cabins. Since I'm blogging about the kids cabin, I might as well talk about the ventilation plan for this room. The guest cabin has a 20" x 20" Lemar Ocean Hatch as it's primary source of ventilation. I wanted more vents in the cabin that would work while under way and while we were off of the boat, so I added two six inch vents in each corner of the cabin. I found some 6" SCH.40 galvanized pipe at the scrap yard and purchased eight feet to fabricate the passive ventilation system. I carefully laid out the vent locations then cut away the insulation two inches larger than the pipe. I wedged a metal bucket with a little water in it tight to the ceiling @ the cut area, then used my plasma cutter to cut out the deck large enough to accept the pipe. I welded in my pipe vents 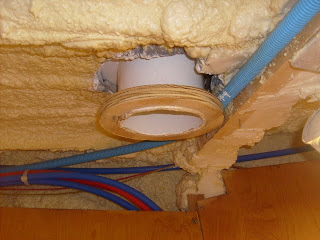 and extended them up to an elevation lower than the cap of the Portuguese bridge. Because of the high bulwarks and me wanting the vent intake up where it will actually catch some air, I want to make sure the cowl is above the Portuguese bridge when I'm finished . I'll fabricate some Dorade boxes to work with the 5" cowl vents I'm looking for. When it's all said and done, the air intake will be above the Portuguese bridge, and the cowls will look quite shippy. I primed and painted the below deck pipe work then glued some plywood on the below deck pipe ends to act as a nailer for the bead board ceiling. Because I'm paranoid about sweating metal, I 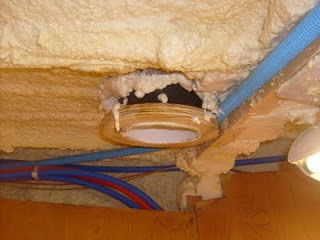 wrapped the pipe in closed cell foam gasket material I had in the shop, and spray foamed the rest with some of those cans you get at the hardware store. Doing metal work in a finished section of the boat is a bitch and really slows me down, but this was something that had to be done. I also added a 12 volt fan in each corner of the cabin that will be controlled by their own switch. The kids cabin also has one four inch duct for air conditioning and heat when the weather calls.

The last wood working project in this cabin was building the drawer unit under the port bunks. There was really not enough usable space to build the lower 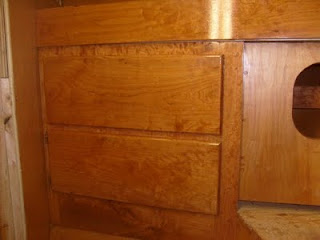 of the two drawers so I built a cubby and installed a drawer front on the cubby. I installed two self closing cabinet hinges on this cubby/drawer along with a catch to hold the drawer front fast. The drawer unit is built against the bathroom bulkhead, and that angle turned out to be 28 degrees. Building the angled drawer was a challenge that took more time than one would figure, but I think the effort was worth it as this drawer added a fair amount of easily accessible storage. The drawer will have one inch of clearance as it slides past the bathroom door casing. The bathroom door will have to be closed 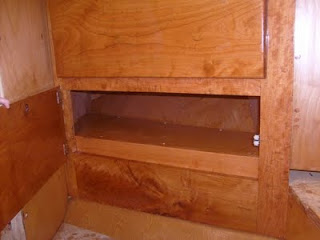 to use the drawer unit, but I'm pretty sure it will be closed all the time since having the door closed makes the room just a fuzz larger. 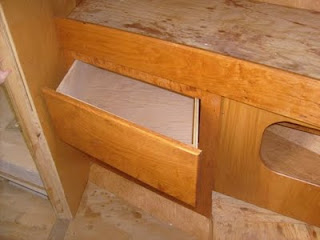 Posted by Conall at 4:57 PM No comments: 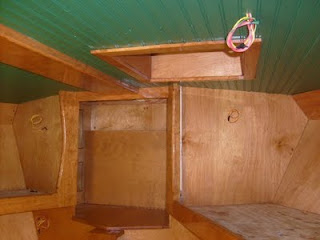 For anyone who thinks this ceiling is green, I have news for you. The manufacturer calls this color " Early Morning Forest Glenn". Once I figure out what a Glenn is I'll probably have a better clue as to why this is not called green. But in case anyone cares, from this day forward, I'm going to say that I have a green ceiling in the kids cabin.

I decided to use bead board for the ceiling in the kids cabin. I chose bead board because it is relatively inexpensive, has a traditional yacht look, is light weight and easily installed. White is probably a more traditional color, but I like the green, and I think it works.

The work in this room is winding down and after a few more evenings of work, this room will be finished. I still have a two more weeks until Spring is officially over, and I think I'm going to make my deadline of getting this room done before Summer. I hate to have a schedule on the boat build, but I want to get her finished and out of the barn, so I'm pushing a little harder and placing some deadlines upon myself.

The way the boat is framed, has caused me to build access panels along the port and starboard side where the ceiling meets the hull sides. On both sides of the boat, I now have an easily accessed chase from the bow to the engine room. Once inside the engine room, I'm good with screwing conduit and other mechanical parts to the walls and ceilings where I can get my hands and eyes on them, so I don't need decorative chase ways.

The port side of the hull chase way houses the water lines feeding the cabins. The starboard side has the spare forced main from t 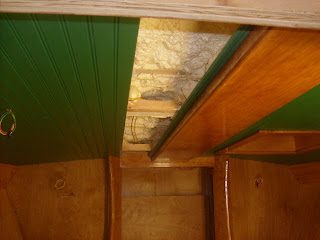 he head if I ever decide to go with a toilet other than the composting unit. The four inch duct for the heat and AC that feeds the kids cabin and dressing room will also be in this chase. I think I have room to get the hydraulic lines for the anchor winch in this chase also, but that has yet to be decided. I really think the hydraulic lines will work well here, so maybe I'll just have to make that work.

I had welded a chase way in the frames along the center line of the hull so I built a removable panel for the bead ceiling to access that area. Other than a few visible screws that I painted over, the chase is almost impossible to see, and is quick and easy to remove. This center chase was my original choice for the anchor winch hydraulic lines, but I'm not so sure now. I'm leaving the small ceiling out of the area above the blanket chest until I decide on the hydraulic line route. 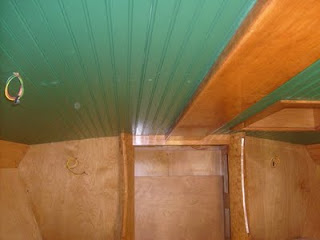 I installed the two port light trim rings, and also started to fit the battens that will cover the hull liner joints. I've yet to install the hatch, but I was able to trim 80% of the hatch as the top trim piece needs to be removed to access the hatch mounting bolts. 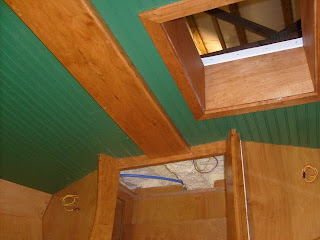 The guest cabin has three flush mounted 12 volt LED ceiling lights controlled by one switch. Each of the four bunks also has a LED bulkh 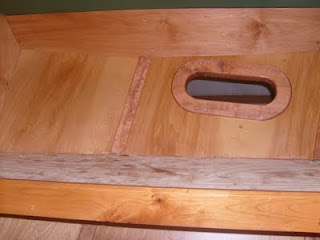 ead mounted reading light on their own switch. There are also two 12v fans in each corner with their own switch. I also have a duplex 120 volt AC receptacle for a TV along with a coax box. The blue water line you see in ceiling headed towards the bow is for the anchor wash down.
Posted by Conall at 9:26 PM No comments: