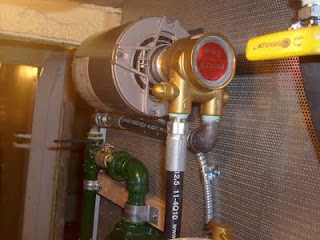 The fuel transfer system is complete, and I don't have to do any more work on it. Well, I guess a persons definition of "any more work" should be discussed over a beer sometime. I do have to decide which electrical circuit I am going to use and make that connection. I only have one circuit ran to the engine room so far ( lights) , but I'm going to be installing some more circuits in the next week or so as I am beginning to do some design with Kevin Morin ( www.metalboatbuilding.org) on the electrical system.

I backed my service truck in to the sh 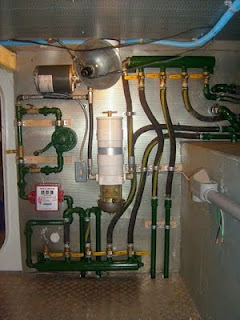 op and pumped 30 or so gallons of fuel into tank #4 . I temporarily wired a plug end on to the fuel pump transfer switch and once I made sure I had the correct valves open ( I need to label the tanks), I turned the pump on. It took a about a m 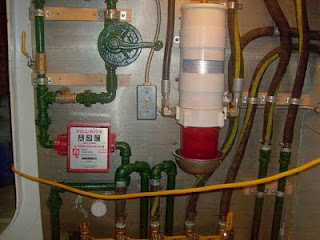 inute for the pump to pick up the fuel, but once the the fuel hit the flow meter the sound of the pump changed and the flow meter started clicking off tenths of gallons. It felt good to finally have a system up and running.

To make sure things were as they appeared, I checked the amperage draw on the pump. The pump is only pulling 5 amps, which is lower than it's full load rating. I also ran the pump for five minutes to check the flow rate. The flow rate of the pump is just about 220 gallons per hour based on my five minute run time. The flow rate I measured is is exactly as advertised by the manufacturer. The 1000 series Racor filter is rated at 190 gallons per hour maximum flow, so I have to figure out what is happening with the measured flow rate of the pump and the maximum flow rate the filter is advertised as capable of. At a first glance, I would have figured that the filter can only physically allow 190 gallons per hour of flow through it given the micron size of the filter media. I might put in a call to Racor and ask their opinion. A gate valve would choke down the flow rate and give the pump some head to work against. I've always felt that pumps live longer if they have some head to push against.

I want to install a vacuum gauge on the filter to monitor when it begins to clog. I think I've seen Racors with a vacuum gauge in the "T" handle, and given how I've plumbed things, that looks like a good option.

After I had ran the electric pump for a half hour or so, I closed a valve, and opened the two valves for the emergency manual transfer pump. I pumped about five gallons to see how it worked, and I'm pleased to say it worked fine. I will say that whenever one of the kids makes it to ye ole shit list, they can meet me in the engine room to manually transfer a 100 gallons of fuel.

It really feels good to finally have a system up and running. Because I now have all the fuel pipe work completed, some of the smaller jobs will begin to fall in to place. I can now install the generator in it's final resting spot vs rolling it around the engine room on 3/4" pvc pipe. Once the generator is set, I can finish the conduit run for my AC in the engine room, and so on and so on....

Now that I have fuel running through the tanks, I will continue on my schedule and build the fuel system for the main engine and generator. This is not nearly as complex or costly as the transfer system, so hopefully I'll have that up and running in a week. I'll fire the engine once I have all the fuel parts in place.
Posted by Conall at 5:35 PM