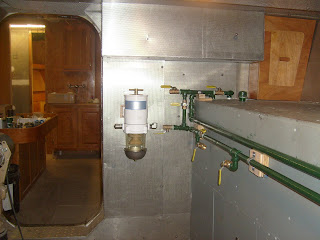 The fuel delivery system is how I'm going to supply my main engine, generator and any other diesel fired device that might end up on the boat. This system is separate from the transfer system and is fed from one 200 gallon tank.

The delivery system is fairly simple although having quite a few valves. Basically, I'm pulling fuel out of the 200 gallon day tank, through another Racor filter followed by a five port distribution manifold that directs fuel to either the main engine, generator or another device.

Between the Racor and the distribution manifold, I added two more " T's ", and three more valves so I could add a 12 volt pump to prime the main engine or generator. Both the main engine and generator have a manual primer pumps on them, but I wanted an in line electric pump to make priming the engines a quick process. If for some reason any engine looses its prime, 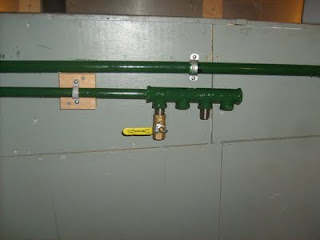 all I have to do is close one valve, open two valves, turn on the electric pump, and crack the fuel intake line on the injection pump. I'm just guessing now, but I'd say I could prime either engine and have them back running in less than a minute with this set up. For me, this is an inexpensive set up that is easy to do while I'm running pipe that could pay me huge dividends some time down the road.

Because I'm using a manifold to feed multiple engines, I felt as if I should install check valves where the engine supply lines connect to the manifold. I'm afraid that one engine could want to pull fuel from another engine, and start messing with robbing an engine of primed fuel, or causing air and headaches to enter the system.

I'm waiting on the check valves to show up and I'm looking into different fuel pumps for my electric lift pump I want to install. I left myself plenty of room to fit the lift pump between the valves and "T's", but I'm stopped on this system until my parts show up early in the week. Besides having shut off valves at the manifold, I need shut off valves right next to the main engine and generator. While it may seem like I'm have too many valves on this system, I think that they will pay off big once I start having to service the engines and system.

Because of where I want to install the electric lift pump and and the type of pump I want, I held the 1/2" steel fuel line 1.25 inches off of the fuel tank. An added bonus of doing this is that I now have a nice grab rail running the starboard length of the engine room.
Posted by Conall at 12:12 PM