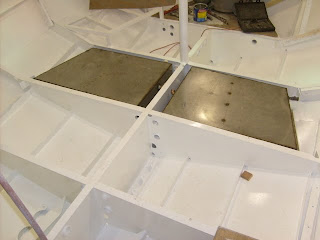 I have eight water tanks for my potable water supply located under the forward sole of my boat. The first tank I built I measured for cubic footage, then filled it with water, and by using a shut off valve and a five gallon bucket I was able to measure the amount of water in the tank. My method of measuring c 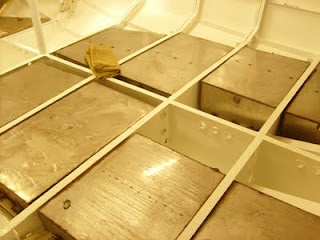 ubic footage and measuring with the five gallon bucket gave me about the same volume of water within two gallons, so I'll stick with measuring for cubic footage vs filling each tank to get volume. I have 325 + gallons worth of water tanks.

After the boat is insulated and I'm assembling components of supply, vent, and filling of the tanks, I'll post more regarding the system as a whole. 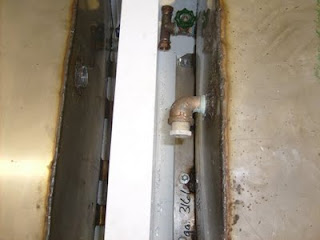 I had installed the tanks prior to final painting to make sure all the brackets would work and also that the tanks would finish out below the sole framing. I also needed to verify that the valves I was using on the supply end of the tanks would clear all the steel framing. I ended up having to adjust the access holes in the frames for the tank fill lines ( I guess I screwed up on the cut twice measure once thing). 4 3/8" clearance between the front of the tank and the center longitudinal frame of the boat is barely enough ( it fit) room to get a close nipple, valve, close nipple then a "T" for the tank supply. I don't think the Governator would be able to get his arm down in that space to operate this gate valve, but I'm able to so I'm happy with the final fit. Because I had installed the tanks prior to painting the tank install went fairly smooth. My 13 year old son helped me as the tanks are to large for one person to handle. The only real issue we had was that the amount of paint on the hull brackets caused me to use a tap or a die to clean up the threads on the respective hull bracket. The tanks are a tight fit between the frames so we used as much care as possible lowering each tank into its "bay" so we would not damage the paint. It would take a hard hit to get through all the coats of paint in the bilge area, but I still was very carefull. 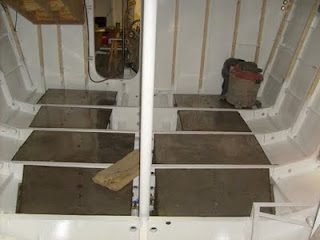 I held off installing the tanks as long as possible to try to keep the trash generated from bolting the firing lumber to the frames from getting under the tanks.

Conall
Posted by Conall at 7:19 AM