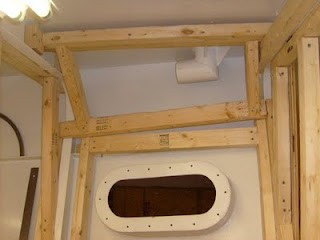 I'm now walking around on a nice level floor. The floor feels very firm and is squeak free while only being fastened down with maybe 50% of the screws. I'm very pleased with the amount of head room I ended up having. So now it is time to lay out the various partitions and interior walls. Just in case anyone is wondering, I'm talking about the lower forward area of the boat in this post. The other thing I should probably say about boat building is that there are very few things that are plumb, level, or square on a boat. Certain things might look skewed or goofy, but that's just the way things work out on certain parts of a boat.

I have a two cabin layout in the lower forward area of the boat. The master cabin witch is amid ship on the engine room bulkhead, and and a cabin in the "V" for the kids. There is a shared shower and head between the two cabins and each cabin has it's own sink. The space's worked out better putting the sinks in the cabins vs a sink in the shower area. It might not make the most sense, but it made more sense to me to have sinks in each cabin.

Coming down the four s 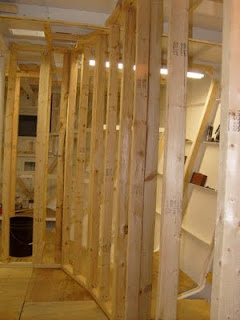 teps from above one will stop at a landing. By turning left you will pass through a door and enter the master cabin witch measures 11' x 11'. There will be a full size queen bed with drawers underneath, a sink/vanity on the right side along with vanity/dresser for Shannon also on the right side. On the left side will be a desk for me and a locker to hang things in. Bookcase's and shelves will make up the wall above the bed, and a flat screen TV on the wall opposite the bed. A watertight door leads to the engine room on the left side of the bed and another door leads to the common shower/head on the right side of the bed.

If you choose to go straight vs left while standing in the stair landing, you'll enter a hall leading to the "V" cabin area. In this hallway will be a small sitting area and a vanity with a sink. Past the vanity you enter the kids cabin with it's bunk beds and storage underneath. There is room on the bathroom wall for a small TV, and there is also an opening hatch in the kids cabin. I laid out this cabin so there will be a bunk area and the hallway area, so people could have some privacy to change or be by themselves without having to go into the bathroom. The hallway/sitting room works out nice in my opinion and it gives this area a much needed private space. 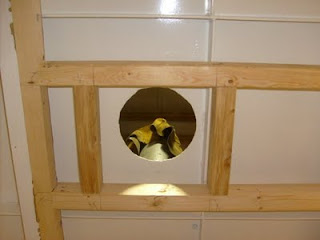 is a port light in the bathroom, and two port lights in the master cabin. All the ports are fixed and cannot be opened. I'll post more on ventilation later down the road, but in a nutshell I have a hatch in the "V", and two six inch vents for the master cabin leading up through the wheel house. The bathroom has force ventilation leading up to the Portuguese bridge. The lower forward area will also have it's own dedicated air conditioning system.

I framed the partitions with 2x3, and will sheath them in 3/8 Cherry veneer plywood. The outboard walls will get a 1x6 ceder plank, and the ceilings will be a painted bead board. I decided to frame now vs after the insulation because I think this is way makes more sense. Once the insulator gets finished with his work it will be extremely difficult to attach anything to the steel frames. I used screws to fasten all the framing together in case I needed to take something apart while I move forward with the finishing work. My insulator stopped by the boat one day recently and commented that I was getting a little close to the steel with some of the framing. He suggested I hold some parts of the framing a little farther away to give him some more room to work. The insulator also said I'd be a lot of the lumber would still be clean when he left so more blocking could be added after he finished.

My next step is to layout all of 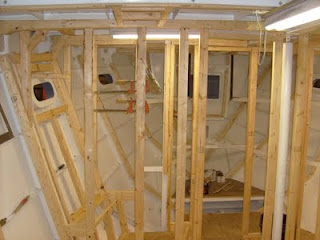 my boxes for my 12v and 120v fixtures. Once I know where all my various light fixtures and appliance's go, I'll run conduit and boxes similar to conventional house wiring only I'll use stranded wiring instead of the solid wire one would see in a house. I also will run as much of my waste and water lines along with anything else I feel comfortable having buried in the foam. I've been using urethane adhesive to glue nailer blocks to certain parts of the hull on the recommendation of the insulator. He told me to go ahead and use only adhesive, because once he sprays that particular block into the foam, I'll not be able to get it out and that block will become part of the insulation. Because of the ease of just slapping some glue on a wood block and sticking it to the hull I'm putting up blocks any place I remotely think I"ll need one.

Having the framing completed really closes the boat in. But for all of those who know boats I know you'll appreciate when I say that the areas I've created are very roomy and very comfortable. The "V" cabin is a little snug, but it still works good and I'm able to move around with ease. I'd love to have another 10' to work with, but I must say I'm very happy with what I have and the space's I've created.

Conall
Posted by Conall at 6:53 AM