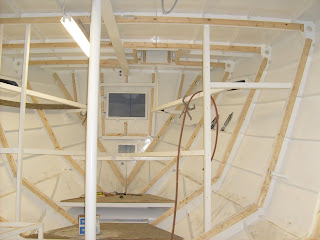 The interior painting of the hull is, for the most part, complete...well it is complete in the forward area of the hull. I still have to finish the engine room, but for now that will wait. It's amazing the amount of light I now have in the hull now that she's painted bright white vs the dark primer I've been living with for the last five years. I feel as if I've reached a milestone of sorts since now I'm close to hauling the welder off of the boat. I still need the welder on the boat to do some work on the fuel tanks and some other odds and ends in the engine room.

The next task at hand is to bolt firing lumber to the frames. My title to this post refers to lumber as sticks and weeds. I know an aluminum skiff builder up in Alaska who's been known to use this phrase and somehow i 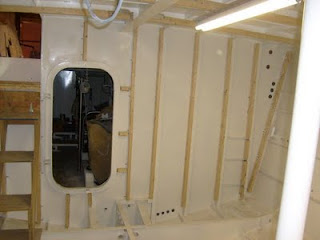 For all of you who are not familiar with the metal yacht building process I should probably mention few words on the interior finishing system. All the metal on my boat has had the mill scale removed prior to the start of construction. After all the welding was completed the boat had welds ground, splatter removed, tacks and other garbage removed, sanding/cleaning with 60 grit, more sand blasting, and then multiple coats of epoxy primer, and epoxy top coat paint. One step I should mention prior to painting was that I drilled holes in all the frames to accept 1/4" bolts for attaching the firing lumber. I drilled these holes 1/16" over size and beveled the holes with a counter sink to help the paint stick better. The next step in the interior is to bolt lumber to the frames that will later be used to attached the finish hull liner. The hull liner is the plywood or planking that will be the finished wall surface. In my case I'm going to use planks on the hull sides, and plywood on all the partitions. Once the firing lumber is bolted to the the frames, I'll install some conduits, some of the electric runs, and some of the water and waste piping. Once that is all complete I will then be ready to have the boat insulated. The insulation I'm using will be a sprayed in, closed cell polyurethane foam, that will cover everything down to the water line. After the foam is complete I will now be ready to start the finish joinery work witch will include the hull liner, berths, cabinets, etc...

Bolting the lumber to the frames was pretty much a straight forward job. I'd clamp a 2x3 to the frame, drill the holes in the lumber, then drive a 1/4 x 2" carriage bolt through the board. I would then remove the board, apply a generous bead of polyurethane 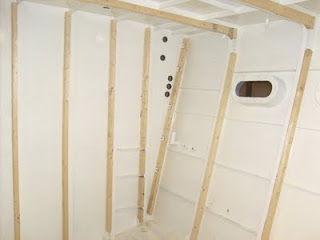 adhesive, put the board back on to the frame, put on washers and nuts, then use my air ratchet to tighten the nuts. I pretty much use air tools exclusively as I just like them better. Air tools are less expensive, don't break when you drop them, and last longer. I have a nice compact right angle drill that works extremely well for drilling the bolt holes in the lumber. This right angle drill has for sure been my tool of choice for most of my drilling jobs on the boat. For the hull side frames located towards the center of the boat ( station 9, 10, @ 11) I was able to just bolt a 2x3 to the frame without any custom ripping as there was not much curvature of the hull in these areas. As I move forward and the curvature of the hull increased, I had to give each board a custom angle rip to keep the face of the board parallel with the hull sheathing. The frames are not square to the hull sheathing but the face of the lumber must be parallel to the hull to allow my finish hull liner to go on nice and fair. Using a bevel gauge, I'd come up with an average angle as measured in a few locations on the particular frame. I'd then climb off of the boat, head down to the shop floor, transfer the angle to the table saw and make the rip. All the lumber was held about 1/4" - 3/8" proud of the frame to allow for some insulation to cover the frame flange. Once the boat is insulated no metal will be seen and the only lumber you will see is the face of the board that the hull liner will be screwed to. The cabin roof was a little different than the hull sides as it has a camber to it vs the straight line of the hull side. Bolting the firing to the cabin ceiling would have been a little easier if I ignored the camber and just bolted a straight board to the frame. I like the camber look of the cabin roof, and since I'm fighting for every square inch of space I kept the camber in my framing. Because of the camber of the cabin roof I had to use a 2x4 vs a 2x3 for the cabin roof. I just had to clamp the 2x4 to the frame, mark the cut line, then use my band saw to make the cut leaving the line. I'd then re clamp the board making sure the board face was held proud, drill the holes, install the bolts, apply adhesive, run the nuts home with the air ratchet. I had some conduit runs in the cabin roof frames that I had to transfer to the lumber, but for the most part it was straight forward.

I've built my lasts two houses and when you look at the size of the forward cabin area of the trawler you'd be amazed at how much longer it took to bolt the firing on the frames vs something like framing the first floor of my current house. Everything regarding building boats just takes longer than what most of us are accustomed to. I'm not really tracking my time, but when I say it takes longer than lets say "Y", I"m talking like five or six times longer, not just the cliche' "double the time".

The firing of the frames is now completed, but there is still lots to do before I can insulate. I still have to install the water tanks, build the forward sole ( cabin floor), install all the cleats or nailers that will be buried in 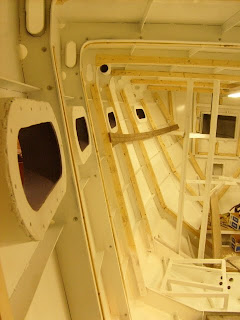 the insulation yet are needed for attaching finished lumber, frame all the partitions so I know all cleats and nailers relating to partitions work prior to insulation. I also plan on installing some of the waste and water piping, conduit runs, and electric wires. Once the insulation is installed it will be a huge pain in the ass to add cleats/nailers to the hull so I want to get as much of this work done now. I've never built a boat before, but having built some house's helps me regarding stragegic placement of some sticks. Since I just got done preaching on how much time it took for my firing, I'd be afraid to guess how much time one would spend attaching even the smallest pieces of lumber once the insulation is completed.

Conall
Posted by Conall at 8:57 PM