The first engine repair has on  our Deere 6068TFM main engine has reared it's ugly head. Basically, the repair revolves around a fuel leak at injector number five, and after a bit of work, I think I've resolved the leak. 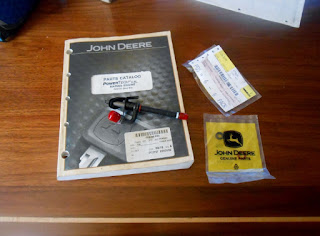 The way a diesel engine creates power is through high compression, which ignites fuel in the cylinder, causing the pistons to move up and down thus powering the engine. This happens via fuel being pumped at high pressure into a device called an injector, which precisely sprays fuel into the cylinder ( at crazy high pressure ). Once the fuel has been sprayed in the cylinder,  valves close, and the piston comes up compressing the fuel/ air mix so greatly that an explosion occurs. The piston is forced back down from the explosion, an exhaust valve opens pushing out the now heated air while another valve opens pulling fresh air into the cylinder. Now, the piston comes back up, and the process is repeated. Whatever fuel is not used by the injector is returned to the fuel tank at minimal pressure. Each cylinder has an injector which sit on top of the engine's cylinder head. To a person who is familiar with gasoline engines, injectors look similar to a spark plugs. 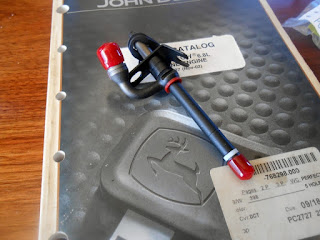 With the new line installed and tested dock side we saw no sign of a leak so off we headed on a 230 mile passage across the Gulf of Mexico towards Venice Florida. Running the engine at a steady 1500 rpm for 35 or so hours showed no leak, and all seemed good. During the next day or so while making way to Ft. Myers at a higher RPM, a slight amount of fuel showed up around the nut causing me to loosen and re tighten the nut again thinking a slight burr or some other issue caused the seep to re appear.

All was well over the next couple of months using the boat lightly for a few day trips with no leak detected. On our 350 mile round trip to Key West, while running the RPM's up over 1700, the leak at number five showed back up. Loosening and re tightening the nut seemed to adjust the leak, but it now was obvious at this point that a bigger issue was causing this.

Back at our home port, and wanting to get this issued resolved before we head back to Key West this summer, I concluded the injector had to be bad. My thought was there must be a crack  in the pressure line on the injector itself, and for some reason, the higher rpm was causing the leak to show up. My real fear, was that if I continued to run the engine with this problem, I could cause a catastrophic failure in the cylinder wall due to improper metering of fuel. It was time to order a new injector and a seal kit.

A few days later, the new injector showed up, so here's how the install went, and what I found: The style of injector on our engine is what's called a pencil injector. The injector has an upper and lower seal on it, and is housed in a very precise bore in the cylinder head. It is held in place by a bolt that compresses some clamps that are on the injector. To remove the injector, one removes the two fuel return lines and fuel supply line. Once  the fuel return lines are removed, the fuel return "T" on top of the injector can now be rotated so you can get a socket on the retainer bolt and remove that. With the retainer bolt removed, you then can use a small lady finger type pry bar to most carefully get under the high pressure line of the injector and ever so easily break the injector loose. Once the compressed seal is loose and unseated in the bore, you can grab the injector with your hand and pull it out of the bore. The key words here are "gentle", "finesse", "easy", "slow"....you get the idea.

With the injector out and on my work bench, I was now able to remove the compression nut that held the return "T" in place. As I pulled the "T" off of the top of the injector , a small part of the injector fell out of the nut. With the new injector laying alongside the old one for comparison,  it was obvious that the return part of the old injector was broken which was the likely cause of this leak issue. 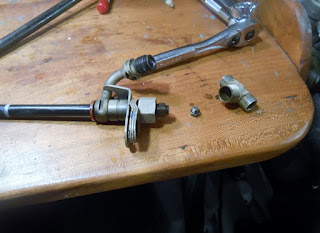 The new injector was easily installed in the reverse order as the removal. After warming up the engine, and running it at a higher rpm for ten minutes or so, no leak showed up.  As soon as I get some time, I'll take her out and put a heavy load on the engine to see if this was the problem.

Given the part that was broken off on the  injector, I can only conclude that the return circuit of the fuel was intermittently being messed with and this was forcing the leak to develop. All parts of the injector are accounted for, so I'm confident no pieces are in the return line. Before replacing this injector, the engine ran fine, with no hint of a miss. I say this because when I was dealing with loosening and re tightening the offending pressure line, the engine would miss, as one would expect, when the fuel line was broken free. Occasionally, I post on the trawler forum, and the other day I was up on the boat roof with a sound meter observing decibel's for a thread I was participating in, when I noticed a slight puff of black smoke coming from the dry exhaust stack while running her at 1500.  When a diesel engine is running correctly, all one should see coming from the exhaust pipe is heat. Black smoke coming out the exhaust pipe is fuel that has not been burned, and is a tell tale sign of restricted air, or an issue with how much fuel is being metered by the  injector. The amount of black smoke I saw was indeed  minuscule, but was enough to make me pause and think about it for the lasts few days. The exhaust color I was witnessing now makes sense due to the broken injector. Now, with the new injector installed, and me sitting on the roof watching the exhaust pipe while running the engine at 1500, I'm happy to report that the exhaust looks pristine. 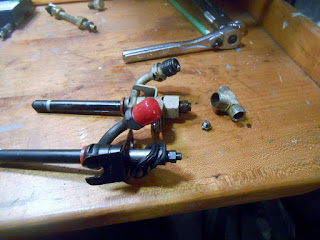 Writing this post took longer than replacing this injector. While I hate to see a failure with only 400 hours on the engine, one has to be a realist with the fact that things due indeed break. It is a little comforting that the failure was so evident and that I was indeed replacing a part that obviously needed replacing. I'm going to order another injector so we have a spare on board as this is a not so expensive part that could literally leave you dead in the water.