I'm running out of places to stack my tools

Late on Sunday afternoon I had just nailed in the last piece of shoe molding, and after surveying my build, I sort of realized I had nothing else to nail up. I had nothing else to rip, and nothing else to cross cut. The next thing I did was throw every piece of lumber off the boat to be hauled away in my truck ( well almost every piece... I stashed a few bits in the engine room). Once the lumber was off the boat, I hauled the table saw off the boat and placed it under the hull, covered with a tarp. Shannon had just spent five  hours giving the below deck areas a thorough cleaning, and along with the left over building material and the lumber I just threw off the boat, we had a very full load for my service truck. Throughout the build I've always had this fear of not having some piece of building material, so I sort of hoard left over material, and today was the day we realized 90% of it had to go.

I actually have decided to some time soon make a list of things I need to complete in order to launch. Lots of little things have been getting completed along with some big ticket items. I can officially say my bilge pumps are wired, and I have the picture to prove it. I guess I should clarify this a little and admit that two of the three pumps are wired. 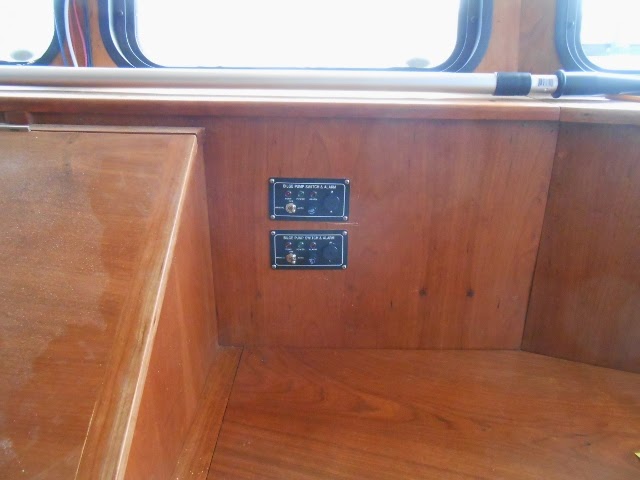 The engine room bilge pump along with the pump in the cabin area are complete. The pump in the lazzarette is not wired because it's not purchased. The two pumps I have wired are big pumps being Rule 3500's. I had to wire these off the the battery switch panel as these breakers are always hot even if the house bank is turned off. I did have to install 25 amp breakers for each one of these pumps. Using #10 wire, I wired these two pumps to the wheel house so I could see when and if they come on. A pump control  panel seemed to  make sense and the Sea Dog panel appears to be what I was looking for. The panel has a manual and auto mode along with having an audible and visual alarm. If the switch is inadvertently left in the off position, and water rises up to the alarm float, the alarm float along with alarming, will turn the pump on. 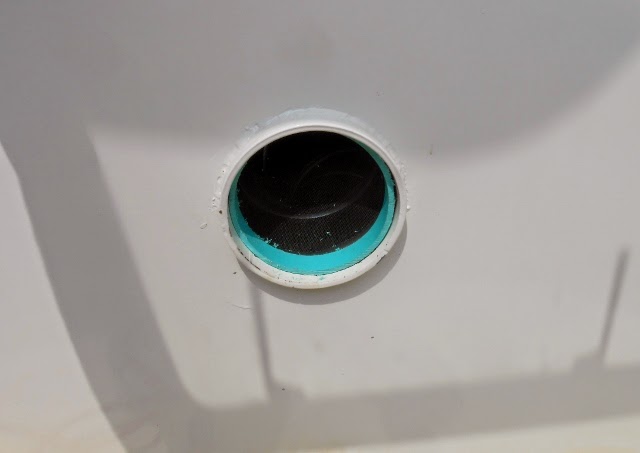 We have a few intake and exhaust pipes I had to deal with in regard to insect screens. Using a slice of PVC schedule 40 and cross cutting the slice creates an internal clip that works great holding screen in. You'll have to fool around with how much to remove from the slice,but when you're finished, it gives a nice clean look that's easy to get in and out, holds the screen great, and doesn't corrode. 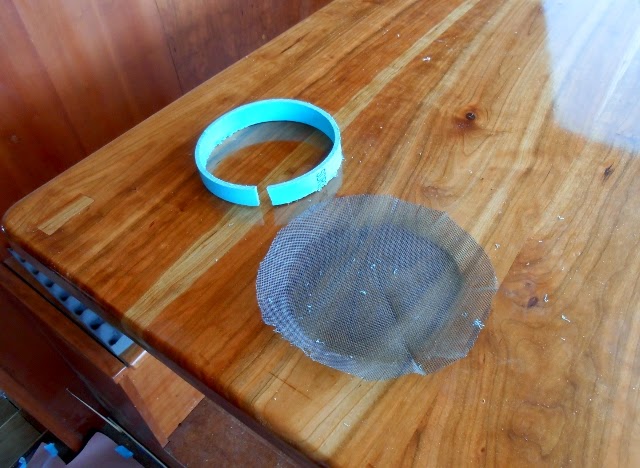 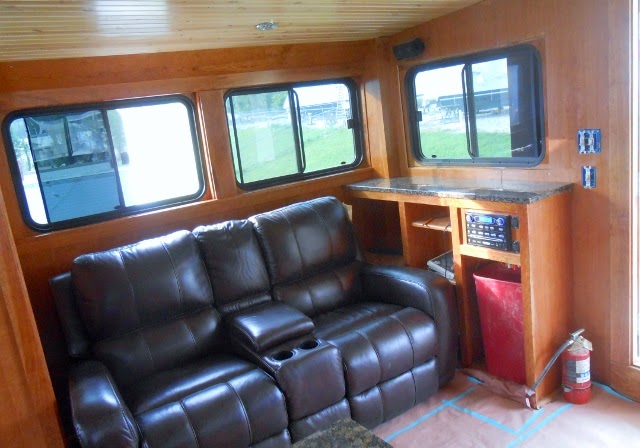 Because the finished flooring is now complete, we were able to move in the reclining love seat. I've been on too many boats that did not have at least one comfortable seat, and I for sure did not want our boat to be one of those. The recliner sort of buries the book case, but you can still get to the shelves, and that's a small price to pay for a super comfy place to sit.


The counter top fabricators finished the granite tops, and there's not a bad thing I can say about this. Because we have so much wood in the salon, we decided to do away with the wood top on the book case, and use granite. 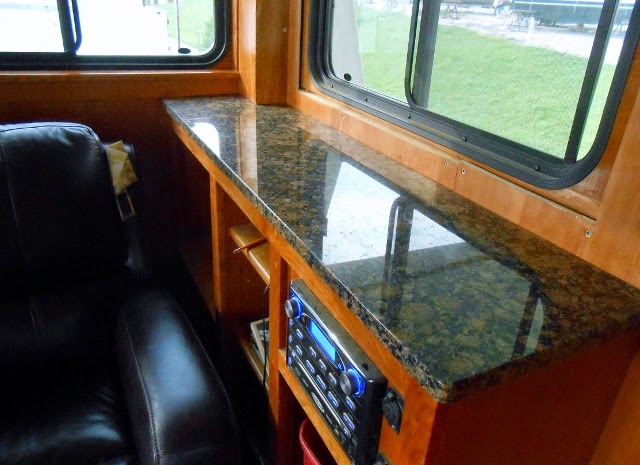 This little detail changes the way this area looks, and is a much appreciated improvement. The guy who made the templates for the fabricator knew what he was doing, and the tops fit like a glove. The installers did a top notch job and we couldn't be more happy. Before we started the install, I had told the template maker we had to glue the tops to the cabinets. True to that conversation, the installers showed up with the adhesive needed to do the work. 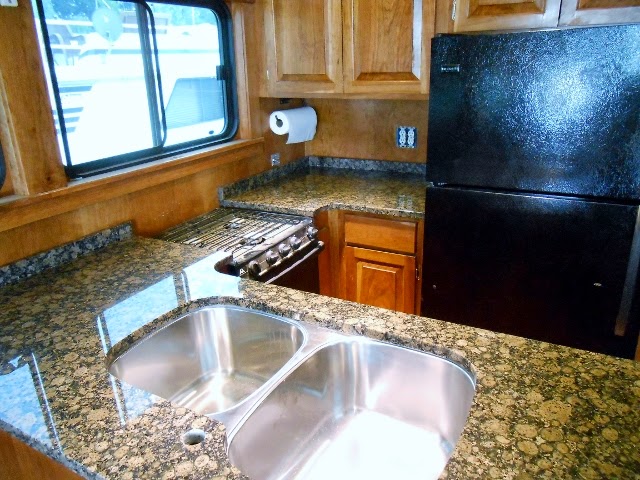 We decided to go with an under mount sink, and I'm glad we did for the one reason of being able to fabricate a cutting board that will fit exactly in the sink. 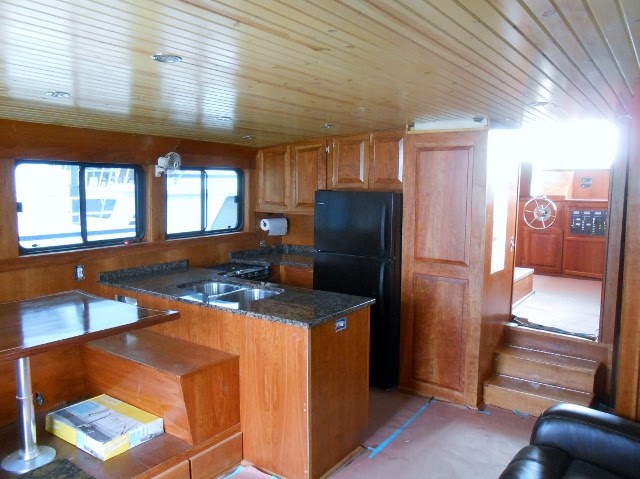 As I've said before, in order to do this boat launch thing the right way, more time is needed on my part to make this launch happen. I keep going back to needing about another year. If we put off the launch to much longer, we're at the end of the summer, and at that point we should just keep her at Washington and finish her up righteous over the Winter. It sure would be nice to have her in the water being 100% complete with nothing left to do... I mean it's only time, right?