Fire in the hole


The minute I opened the door leading from the  back deck in to the salon, the faint smell of oil got my attention. After having spent the last 30 years earning my living owning and operating heavy equipment, one has to put trusts in what our various senses are telling us. 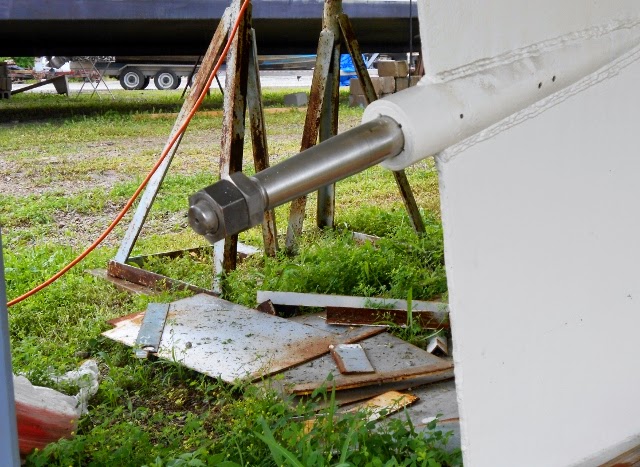 Odors such as the faint smell of coolant as it's vaporized while running down a hot engine block, the smell fuel makes as it comes in to contact with hot exhaust, the smell of brakes getting hot and making its way into a cab after motoring down a long grade. Most times, the odors of  machinery tells the story long before the gauge registers a problem...stop and investigate. On this particular day, I was coming in to the boat after topping of the power steering reservoir the  previous night.  Not having tightend one of the lines that passed through a bulkhead fitting allowed 3.5 gallons of oil to drain in to the bilge over night, and the odor I noticed as I entered the boat alerted me to a problem.

Having the exhaust finally fitted and landed took a few days as I sourced parts. 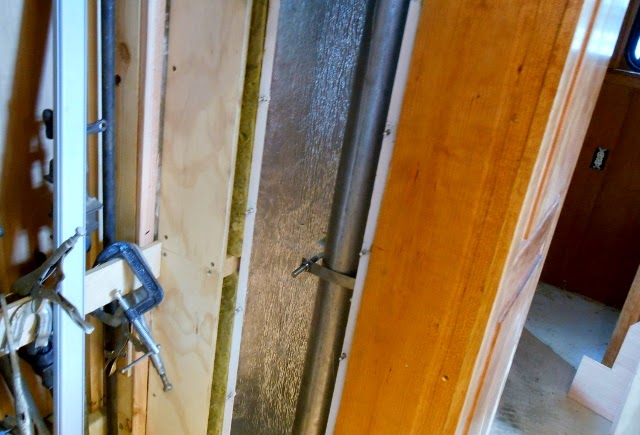 The biggest slow down on the exhaust was deciding on what material to use as a liner within the exhaust stack, then getting that material to the boat. Self adhesive, high performance heat shield was what I chose to use, and for the most part I'm happy with the product. I can for sure say that it sticks like crazy and there's no second  chance regarding alignment.  Besides deflecting radiant heat, this product will help with harmonic noise bouncing around the exhaust stack. I only lined the exhaust side of the stack, but I have plans to also line the intake side of the stack.

On my last post I had mentioned making some righteous exhaust hanger brackets. 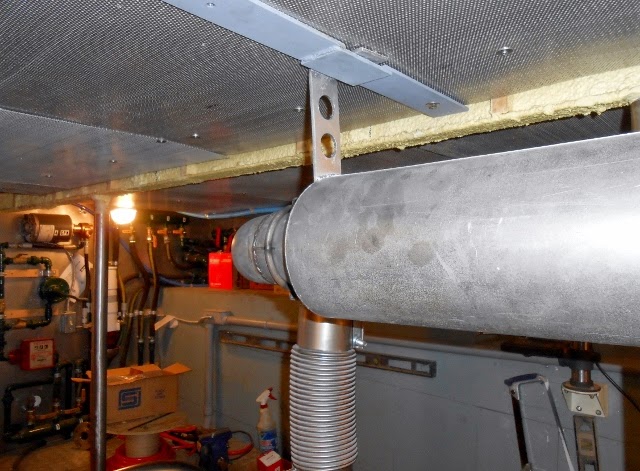 I don't think we'll be calling theses righteous, but they do the job of securing the horizontal exhaust pipe simply and robustly. I didn't know if the hanger would transfer dangerous heat to the ceiling, so I bored a couple of one inch holes in the hangers to  help cool them. Little things sometimes make a big difference.

With the exhaust hung and secure, the next item was to commission the steering system, and give myself something to write about for my first paragraph regarding the oil leak. The steering system is powered by a gear that runs off the engine cam shaft, and is identical to what one would find on a heavy duty truck or road tractor. 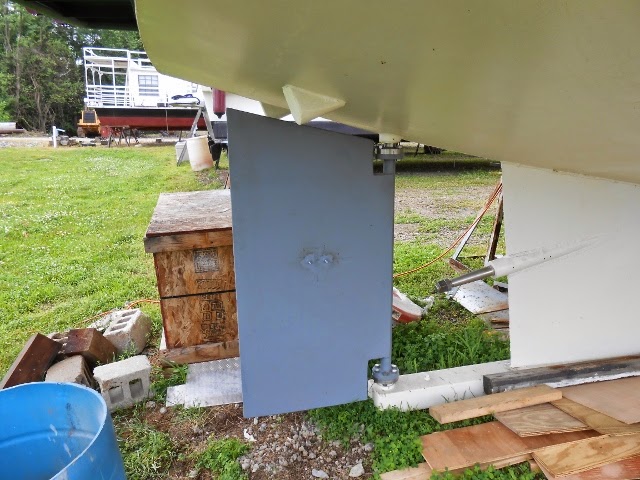 Since all the steering plumbing had been installed two years ago, getting it ready to go only involved installing the rudder, filling the reservoir with oil, and installing the steering wheel. The rudder bolts are going to get another look from me as the nuts are not the correct type. I had planned on using nylock nuts, but my bolts are too short for that, and if I go the nylock route, I'll have to order new bolts. Gregg, at Washington Marine suggested keeping the same bolts but tack welding the nuts and bolts to the flange. Tack welding might be the way to go as I don't think over kill is a bad thing when making sure ones rudder is secure. 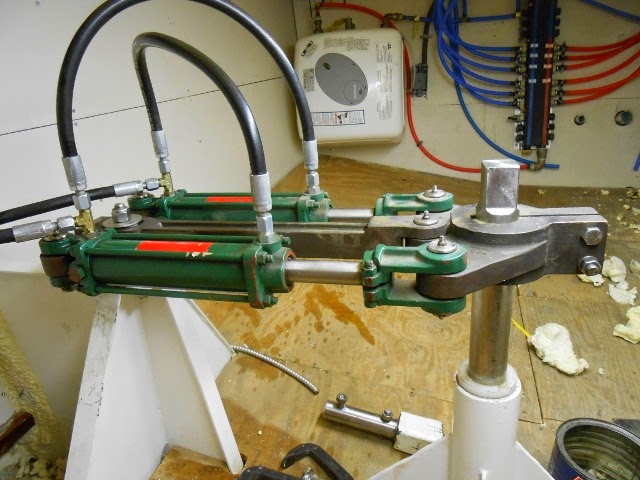 With the steering system full, crank case oil full, coolant full, and gear box oil full, it was time to fire the engine.  Moving two valves on the fuel delivery lines, and throwing a toggle switch, placed my back yard boat builder designed fuel lift pump system in service, and fuel was soon flowing in to the filters. With fuel flowing out the primary and secondary filter bleed valve, I quickly cracked the fuel line at the injector pump and fuel was soon flowing out that fitting. 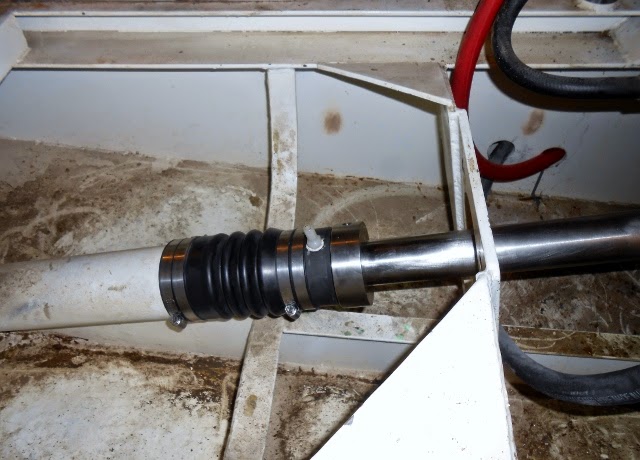 After closing the line at the injection pump, the little lift pump started to load up as it was beginning to dead head from hitting the injection pump. The sound of the lift pump dead heading told me the fuel system was full, as the little lift pump did not have enough ass to push fuel through the injection pump. Past experience has taught me to go ahead and crack the six injectors on the head and begin cranking the engine. With the engine cranking, I closed two injectors, and she began to fire. Closing the next injector caused the engine to run without the starter, and with the closing of the last three, she was sounding sweet. Having the external lift pump to help bleed the system turned bleeding the fuel system job into a quick, and easy, two minute job.


After watching the engine run for a few minutes, and checking for leaks, I moved up to the helm to see if the steering system was operating. Engine powered steering is awesome. As soon as I began to move the wheel, I could instantly tell it was  working. I cranked the wheel over three and a half times, and I felt the rudder slam in to the external rudder stops. Another three and a half turns the other way, and  the rudder slam into the other stop. Now I have to find some rubber  or a pad of sorts for the corner of the rudder, as the force of the rudder hitting the stop is taking off paint.  I'll go ahead and say this again for all that did not hear... 3.5 turns of the wheel hard over to hard over.... awesome. 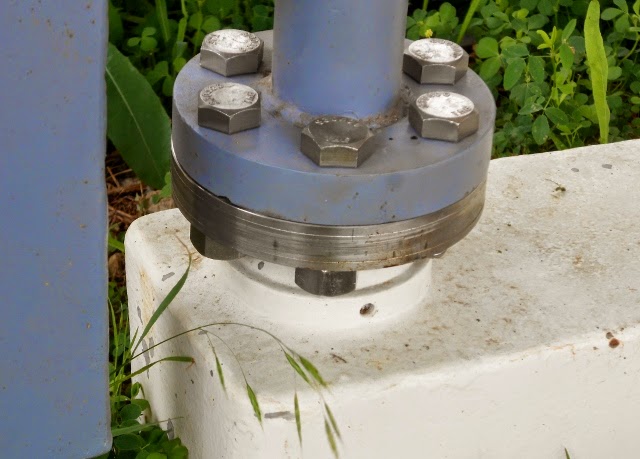 All the insulating and sound abatement I've been doing during the build seems to have paid off. With the engine running at a healthy 1700 rpm, one can easily carry on and hear a soft conversation in the wheel house. I'd like to get a decibel meter to see just how loud the engine is. With the engine at a  high idle, the loudest part about the engine is the rattle of the exhaust rain cap flapping.
The punch out list is growing by the day, and a lot of the list can be done when I start doing sea trial. I ordered bottom paint from the boat yard today, and if the weather cuts us some slack, I should have the bottom painted by this time next week. I also ordered control cables from the boat yard, so if push came to shove, I could drop her in the water within the next two weeks. 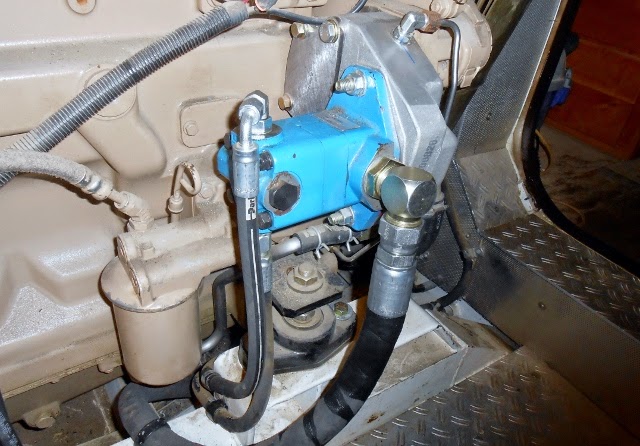 Cheers
Posted by Conall at 9:18 PM