This is the first weekend  I've been able to get in to the boat yard now that they're back on summer hours, and I feel like I'm starting to get somewhere. I got a fair amount accomplished this weekend, and am almost at the point in the wheel house where my attentions can move elsewhere. 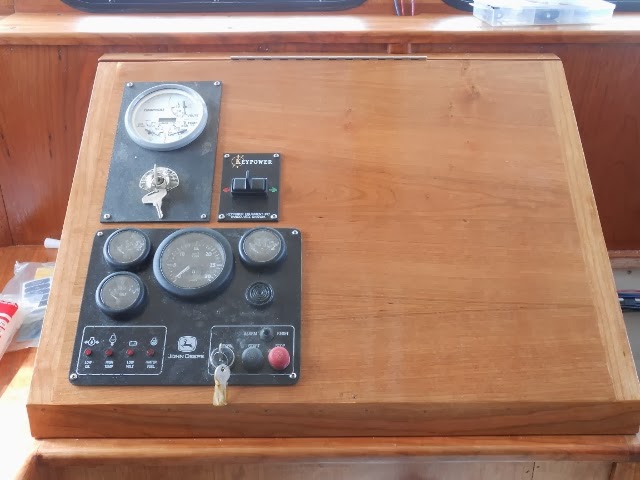 The edge glued panel was to wide, and was already showing signs of movement. The layout of the gauges was messed up, and once I saw a crack in the wood develop, that's all the motivation I needed to saw it up and toss it in the stove.  I used cherry plywood for the new panel, and edge glued some stock to it to hide the cut ends and give it a bread board edge look. Because of ply being more stable, I was able to get a little tighter on the instrument layout, and ended up having quite a bit of room left over after installing three of my panels.  Yet to be installed is a chart plotter, a floscan gauge, a depth finder, and a bank of switches in the available space I have left. If I end up being unhappy with the cherry plywood instrument panel, I'm going to go with black plastic laminate, although I  think this panel will work.

The next order of business was to install the door that house's the electrical distribution panel and the panel itself. I built the door large enough to be able to add sub panels or another panel below the main panel. The door is my basic style and rail door using a 1/4" cherry plywood panel, and cutting all the parts on my wood shaper. 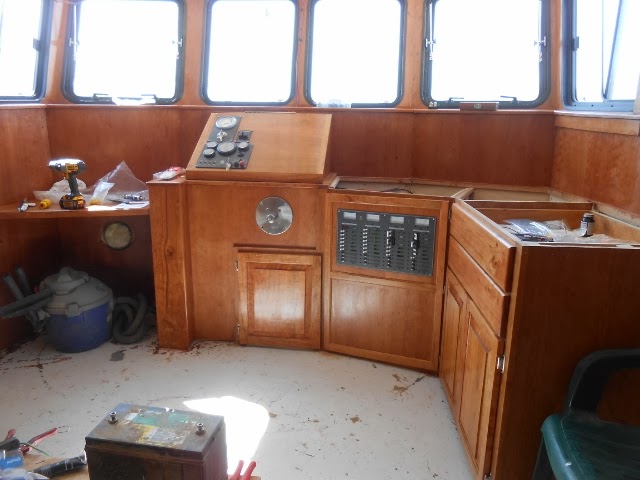 Because the door is so large, three hinges were required to hang the door. I can tell you without a doubt,  that having the electric  panel hinged has already paid off in spades in regard to how easy it is to work on. It really is nice being able to quickly open the panel, have the back of it right in your face, and sit on a bucket and land wires. 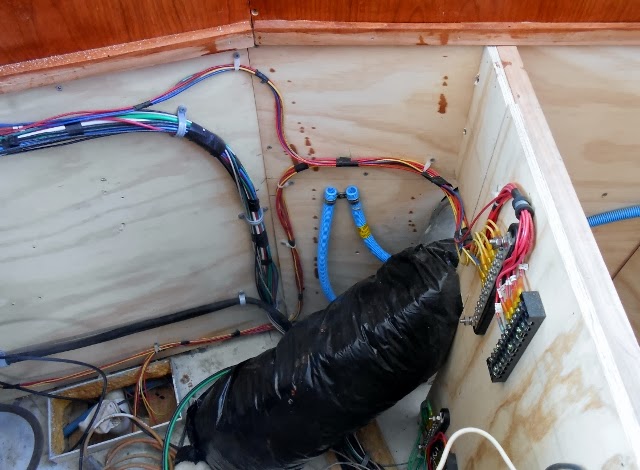 With the panel now mounted, and having all the parts to land some wires, getting things hot through the panel became my next task. The boat is laid out with all the AC conductors coming from the port side, and all the DC conductors coming up the starboard side. I built a bulkhead perpendicular to the panel door around the fresh air duct to give myself a place to land all of the AC and DC conductors. The bulkhead was built on the hinge side of the panel door to keep accessibility to a maximum. All the conductors land on either a buss bar or a terminal strip depending on their function. Commons and bonding go to a buss, loads to a terminal.  From the buss bars or terminal strips, the wire makes the jump from the panel using a flexible, tinned marine wire. Once I had the wires straightened out, and the buss bars and terminal strips laid out, things started to fall in to place and the work moved at an easy quick pace. My thought is that by having buss bars and terminal strips to land all the wires , adding, moving, trouble shooting, upgrading, and  maintaining all our circuits should be relatively simple.

The panel is built for two AC shore power sources having two AC buss's. The panel also can be fed via our generator or an inverter along with the DC source. Because of wanting to feed one buss with inverter loads, and only having one shore power cord, I used some jumper wires on my load terminal strip to hot three circuits using two breakers. I have all the lights hot, all my receptacles, and my air compressor.  The jumper wires are no big deal and are a common method, but I am pretty sure ABYC allows for no more than four wires per terminal. It's big time sweet being able to see ( via the panel gauges) how much voltage is coming aboard, and how many amps are being used.

Now that the panel is at the point that it can be used and easily finished as the project develops, I decided now was the time to get some more heavy work finished with pulling the battery cables from the engine room to the wheel house. The 12 volt house bank sits in the engine room and with the DC panel in the wheel house, a heavy cable was needed. Over the summer I had purchased two 100' rolls of 2/00 cable. Buying 200' of seems like a lot, but I still have to fabricate the leads for the three battery banks, land the starter cables. 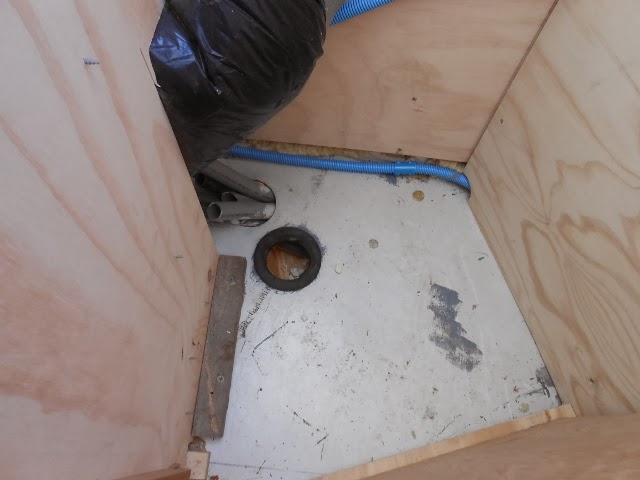 I'm of the school that it's cheaper to buy 10' too much vs being 2' short.  I spent the extra money and purchased battery cable vs the more common welding cable. Welding cable is good stuff, but battery cable is  better, and it's a fact that fittings crimp better on battery cable. From the wheel house to the engine room, I have three 1" flexible conduits, and three 3/4" flexible conduits installed. Deciding to save these conduits for future use I hole sawed a new three inch hole in the floor next the the conduit, then installed a grommet to protect the new cables. 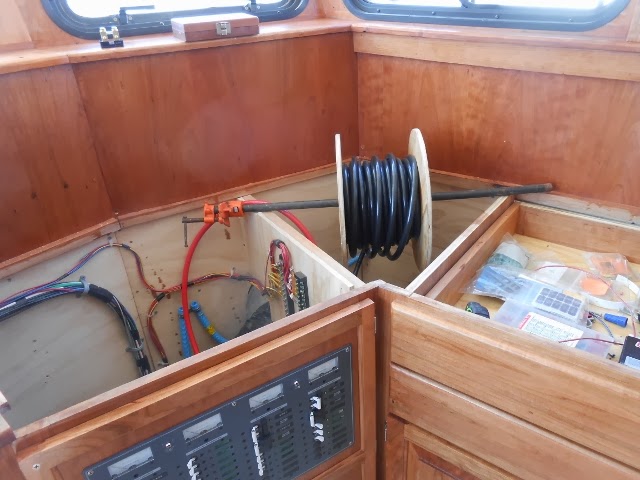 The battery cables are ready to be landed on the panel, but I need to do some work in the engine room to land the cables to the batteries.

Since I was in the cable pulling mood, I went ahead and pulled the cables from the wheel house to the engine room for the main engine and the generator. I use a 9/12 UF ( nine conductors, 12 gauge, direct bury) wire for work often, and I have quite a bit of scrap lengths at the shop, so that's the wire that got used for this job. The main engine uses 10 wires, so I taped a red 10 gauge wire to the 9/12 for the battery conductor on the main engine. The generator only needs seven wires, but since the 9/12 is 12 gauge wire, and I wanted a 10 gauge for that battery line, more red # 10 got taped to this conductor  too. Wanting to be able to stay on task, I landed those two conductors on terminal strips under the instrument panel so once I run down a few more parts, connecting the main engine panel and the generator panel will be quick and easy. Using terminal strips in this way will also make adding another helm for a possible future fly bridge will be more easy. 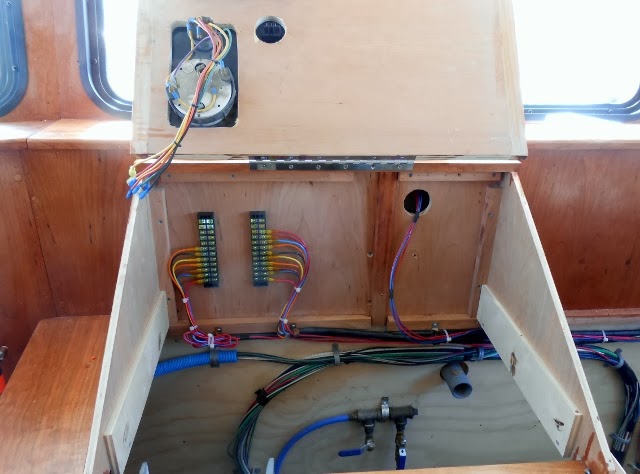 Because the generator only needs seven wires, and I pulled 10, I now have enough wires already run to the engine room for the bow thruster solenoid valve, and that's a nice added bonus, and one less thing I'll have to deal with. 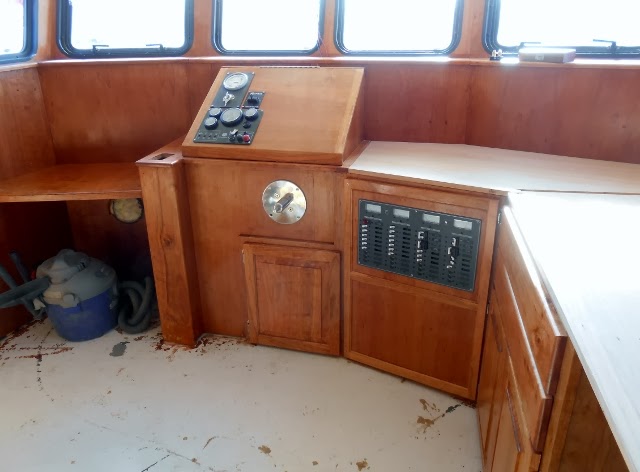 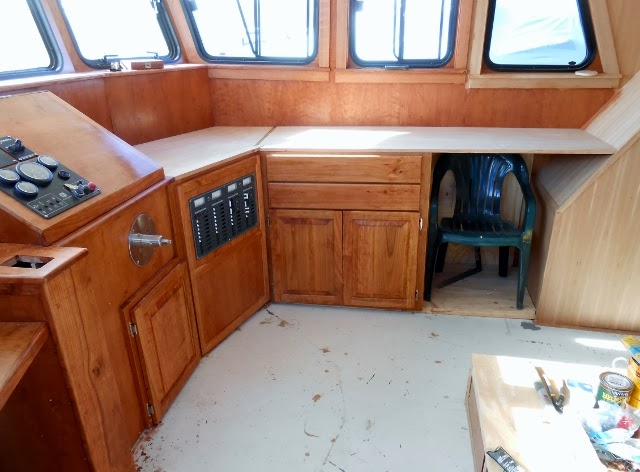 The wheel house is starting to look good, and I can see the day soon approaching when I can jump back in the salon and start sheathing. This nice bit of wheel house work I did this weekend found me burning through 50 -  #10-12 heat shrink forked terminal ends like it was nothing. So before I can really call it a done deal, I'm going to have to source some more parts. I'm going to look at it a hard this week, but I do believe I can now install the counter top and get some color and finish on the last bit of wood.