As I sit and type this post the sun has just began it's climb and a heavy frost covers our front yard. In my last post, I had mentioned how Winter was sneaking up on us so I had to get the barn put back together. Well, over the last few days, Winter has made and appearance with a  heavy "thunk", as the temperature outside is a chilly 15 degrees Fahrenheit.  A large Arctic high has settled in over us, and will be planted  here for the  next five days or so keeping things on the cold side. 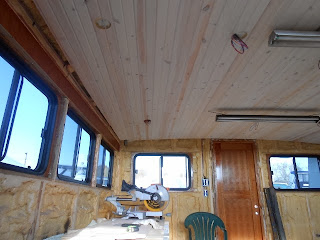 The ceilings in both the salon and the wheel house are #2 - 1"x6" V groove, white pine. My original plan was to paint the ceilings a traditional yacht bright white finish, but after talking to a contractor I do work for, he convinced me to pickle the wood. Pickling is a simple treatment of wiping on a semi clear white stain, then wiping it off. 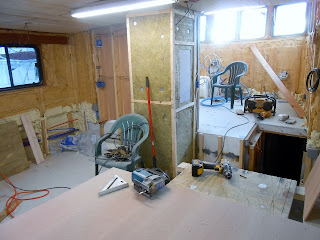 This gives the wood a bit of color, brightens things up, while still allowing the character of the wood to show through. If we end up not liking it, we can always scuff the ceilings and paint them a solid color. The ceilings will get a few coats of satin urethane to seal them. 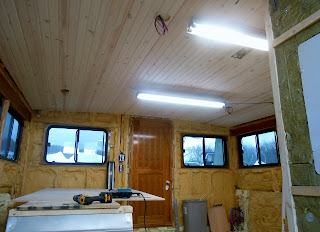 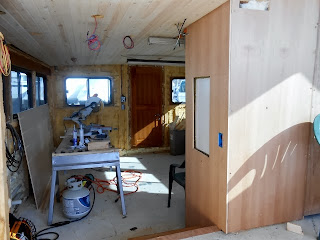 The salon ceiling is completed, and the wheel house ceiling is close. When I mean close, I'm talking about one board has yet to be installed on on both the port and starboard side. In the case of the wheel house, the wall material has to go up before I can finish the lasts two ceiling boards, as those two outboard planks have to land on nailers attached to each side wall.

The salon ceiling was about as straight forward as one could get regarding installation. The salon ceiling  has a nice  camber to it which I think looks great  now that the ceiling is in place, and the taper of the width aft to forward is not that great. The salon ceiling frames connect directly to the wall frames because the windows are about a foot down from the ceiling. Because the windows are a foot down from the ceiling, I was able to create a chase without having to cut in to the steel frames on either side of the salon. I have one " in ceiling" access panel that goes from the exhaust intake stack to the mast step, and that panel is only about 4' in length. 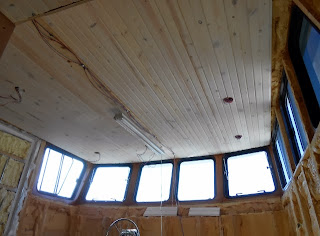 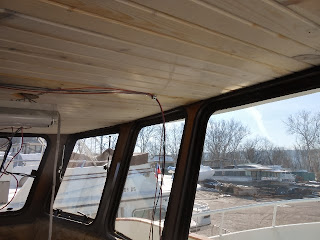 If I ever have to remove the windows, I'll deal with the ceiling at that time, and call any modifications a repair. Because of how the ceiling is framed, and the fact that I neglected to install a  nailer for the ceiling at the two forward side windows, I have a small area of ceiling that will require a little bit of work to finish the install. The fix is not really that complicated, but in order to make it look tight and right, a piece of cherry with a tongue on it will have to be fabricated and fastened to the widow frame right above the trim ring (  more on this later if I remember).

Now, I'm on to fitting the side wall material in the wheel house, and also having to finish the jambs on the door before I can wrap up the ceiling. Getting the ceilings and walls lined really makes me feel like I'm making progress because the  foam is starting to vanish, and the inside is starting to  look quite shippy.  The bad news is that on December 1, the boat  yard is only open Monday-Friday 8-5... no more weekends. The yard holds this schedule until March 1, so I'm going to loose a noticeable amount of work time over the next 12 weeks.  I'll be able to make up some of this time because Winter weather kills my for pay work schedule, and I for sure have more time, but on the flip side of that scenario, I"m covered up busy with paying work right now and am really booked solid for the next ten months.  Depending on how busy the weather lets me work for pay, and how reliable  my cash flow is, I  might end up hiring out some of the straight forward mechanical work I have to get done to some good, reliable contractors I know. Now that I've been at Washington Marine for a few weeks now, I've seen  how they work, and I for sure can tell you that they'd be at the top of the list for some of the jobs I have in mind. We'll see how all this schedule thing works out as the time is fast approaching where we have to commit funds to leasing harbor space for the up coming season.