The day after we pulled the hull out of the barn, we moved the wheel house over to side of the barn with the now  modified door. The rest of that second  day was spent jacking the wheel house up high enough to allow our trailer to get underneath it. 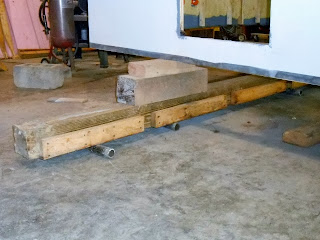 Using a floor jack, the wheel house end of the super structure was  lowered down on to one of the 6x6's that were removed from modifying the barn door opening. 2" steel  pipes were first  placed under the 6x6. The aft side of the super structure was raised up enough to get pipes under it by using a block and a crow bar. For some reason, I thought I'd be able to move the super structure by having  Shannon and I push on it. After about 5 seconds of pushing, we figured another source of power was going to be needed. The John Deere tractor we use to mow was the perfect tool for the job. We move the structure as far as the tractor would allow, then used the skid steer loader to bump it over the rest of the way from the other side. 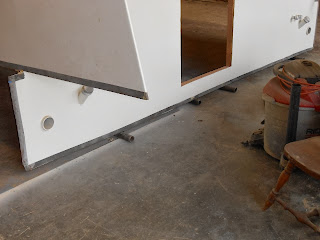 Jacking the super structure up for the trailer to fit under it was pretty straight forward. Using the skid steer loader with a set of forks in the front, and a floor jack in the rear, it took about 4 hours of lots of moves to get the job done.

The nice thing about building in metal is how rigid the structures are and how things don't rack when you pull on them. When I hooked the tractor to the super structure on one end, and pulled, the whole structure moved.

The wheel house is ready to transport as is the hull. I spent the last weekend doing some work on the dolly, and tidying up the inside of the boat. We  had about three inches of rain the other day, and while we had spent some time taping and tarping openings in the deck of the hull, we  still got some water inside. The good  news is that all the water tight bulkheads are indeed water tight below the sole, the bad news is that I had to spend Sunday getting the bilges dry. It's really no big deal as this is still a construction project, and it's not weather tight yet, but I hate seeing the weather getting to her. 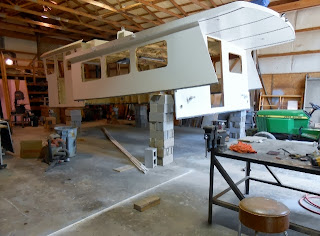 I have the permit to move in hand, and for the most part I have the strategy we're going to use to make it happen. The permit expires this Sunday, so the move has to happen between Wednesday and Sunday. So, this time next week, I should have both pieces down at the boat yard ready to join them together.