Window frames are ready for windows

The window frames are finished and another job has  made it off of  my list.

Once I had all the Cherry window frames installed, I wanted to make sure all the window trim rings fit as they should. I'm glad I did this, because I had to trim some of the frames to allow the trim ring to fit with the 1/8" clearance the manufacturer recommends. The window frames, like most other things, took up a lot more time than I would have estimated 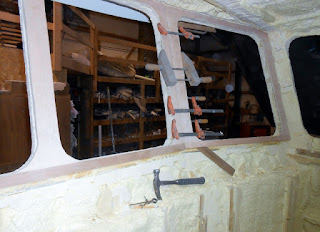 . I was also surprised that building the frames consumed a sheet and a half of Cherry veneer plywood. Only one frame made it in to the wood stove, so there was really no waste. The last time I bought Cherry veneer plywood was when I was building the cabins below decks two winters ago. I guess technology has allowed the plywood manufacturers to alter the veneer as this veneer is extremely thin. I don't even want to guess what fraction of an inch is, but one has to be very careful as sanding through it is not to hard to do. Because I was joining frames together using biscuits, it was critical that the frame faces were perfectly flush so that a light sanding with 220 grit would bring the two surfaces perfectly fair.

My system of using blocks, while a pain to install, looks like it's going to work out good. If I were to do it over again, I would probably glue the blocks to the hull sheathing vs bolting them in place as I did. I had the chance to glue some blocks in place, and also the chance to remove some glued in place blocks. The glued in place blocks I did remove, split away in the wood instead of the glue failing at the hull sheathing. I'd have no problem in the future of relying on a glue to metal joint in this application. Before gluing a block to the hull sheathing, I would recommend one scuffs the primer to give the glue something to grab. The biggest reason I wanted to use blocking was have a situation where I have no metal at all not covered with foam insulation. I have two small areas inside the super structure where the foam broke away from the flange due to my aggressive foam trimming, but that will easily be repaired when I foam the hull to super structure joint this spring. The only other place I have bare metal not foamed is the thickness of the hull skin at the window and door rough opening. Once the window is installed, it will be no bid deal at all to go back with a can of foam and seal this joint.

The foam guy did a pretty good job overall, but the thickness of the foam was inconsistent at the window opening. While installing the windows, I'll have a roll of fiberglass insulation on hand so we can fill this gap. 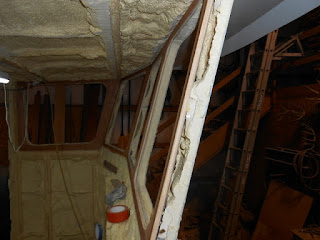 The metal is not exposed, but as you can see from the picture, the thickness varies. I want the maximum amount of insulation for a comfortable boat as much as I want to eliminate any chance of condensation.

I was going to temporally install the windows to see how they looked, but I soon realized that the more I handled them and had them out of the crate, the more they could get damaged. 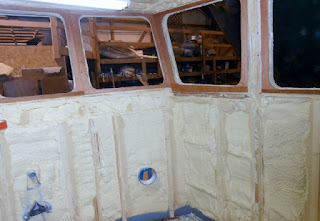 The next project is building the cabinets for the galley. I'm well into the cabinet job and am happy with the size and layout of the galley. 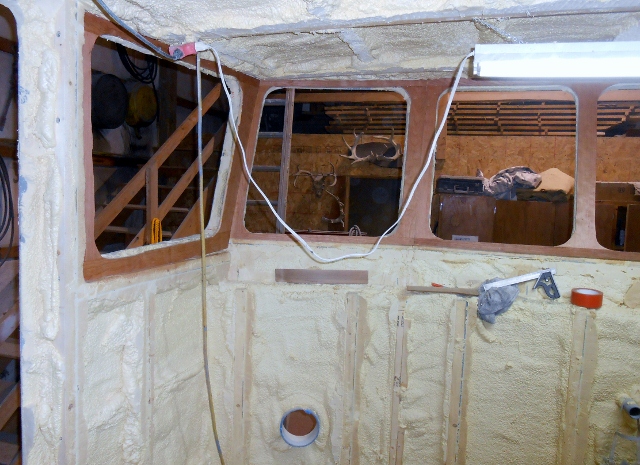