Tomorrow morning, before I take off for work, I'm going to spend an hour or two so I can clean and organize the shop now that the metal work is completed. I'm ready to prep the super structure for paint so I need to put away all the tools I've been using to do battle. 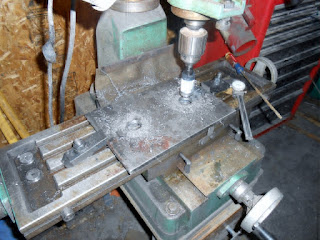 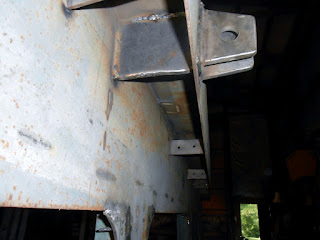 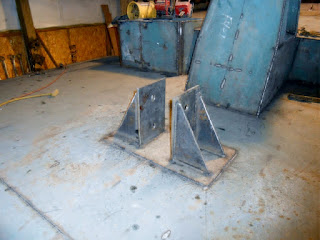 I'm a little blown away with how long it took to get the metal work completed. I did have a major set back in that the rough openings for the windows were cut for a four inch radius, and the windows are built using a six inch radius. There are 17 windows in the super structure and the repair consisted of me using my plasma cutter to cut out the 68 corners out of the existing rough openings. I then cut 68 new radius corners and welded them back in to the openings. The windows in the salon were easy as they were all square. The windows in the pilot house were a bit more of a challenges as they are all parallelograms, and required a little bit of noggin work to get the angles along with the radius's correct. But, the window openings are now correct and all the widows fit the way they're supposed to. Along with repairing the window openings, I added 60 or 70 more tabs to the window openings to bolt framing lumber to.


Another job I got finished was fabricating the Tabernacle for the mast. After some indecision and talking with some other builders, I decided to go with a six inch mast. The primary function of the mast is going to be used to hoist my skiff to the roof of the salon. I am also going to have my radar mounted on the mast, and some lights and antennas. My long term plan regarding the mast is to be able to use it for a future para vane rig, and at a minimum, a flopper stopper rig. The Tabernacle is built out of 1/2" stainless steel. The pins used to hold the mast to the tabernacle are 1.25". The tabernacle is centered on frame #13. The tabernacle also has a doubler plate that it sits on and by doing some additional framing and reinforcing, I am spreading the load of the tabernacle to two additional frames, #14 @ # 12 . The bracket that will hold the para vane pole is also connected to frame #13 with solid 1/2" plates. I increased the flange thickness on # 13 to 5/16, and all is a continuous weld  were the reinforcing occurs. Two frames aft of the main para vane bracket, sits another bracket for another pole that will act as a brace for the main pole. The bracket for the brace is also connected to the frame with 1/2" plates. To connect the stays and shrouds, I welded 1/2" stainless pad eyes to frames.  I have two shrouds on each side, and one fore stay. I don't know if I'll ever use a para vane rig, but I do know I'll use flopper stoppers while at anchor. I had an engineering friend of mine give me some advice with beefing up the structure, and I feel good that I have things beefy enough. A fair amount of time and fabricating went in to this part of the boat. Because I will have electric winches for the mast/boom, radar, and some lights, I welded a 1.5" stainless nipple next to the tabernacle to run the mechanicals. I positioned the nipple so that  I can bolt a 6"x6" splice box to the tabernacle gusset, and use a grommet to make a water tight seal to the nipple. I'll use good quality cord grips to bring the various feeds out of the splice box.

The other job I  did was increase the width of the door at the salon to 32". I'll be fabricating the aluminum door, so I feel OK with the increased size. I plan on  having at least two dogs in the door to help hold it fast. Along with being weather tight, I want a door that will keep the thieves out.

I'm using composting toilets on board and each one of those requires an 1.5" vent. I made those vents out of sch. 40 stainless. One is welded in to the soffit above the salon, and the below deck vent is welded in to the front of the wheel house.  I'll use PVC to connect the toilets to the stainless stubs I welded in the hull. 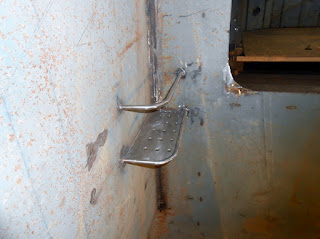 We have a shower for the cabins below deck, but due to the size of my posse, I felt it best if we had another shower on board. The easiest place to do this was on the aft deck in the port side corner of deck on the salon bulkhead. This will be a hot/cold shower. I fabricated a stainless shelf with a lip on it to retain soap, and a bar for wash rags and to hold back shampoo bottles.

I installed a 4" stainless vent for our 230volt clothes dryer. 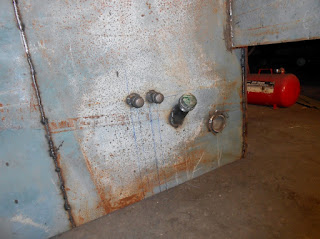 On the aft salon bulkhead on the aft deck the fuel fills and vents reside. There is a two inch fill on both the port and starboard side. Next to each fill are the vents for the two port side tanks and two starboard tanks. The fill and vent pipes are welded in place. I really need a box around each set of pipes, similar to what Peter did on Koala ( now Kame Hele... not sure of the spelling). I have a little bit of time left where I can fabricated these box's, and I might try braking them over the work bench. If not, my neighbor will do it on his press brake.

Outboard of the fill and vents are the two three inch vents for the lazzarette. These are weld in place. 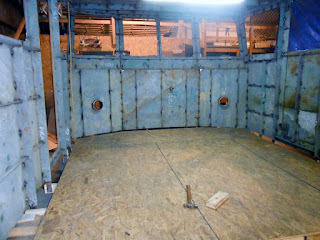 I welded the six inch vent intakes for the master cabin. These vents are in the foreword wall of the wheel house.

To get up on the the roof of the salon, I'm going to gain access via the wheel house side deck. Because of the raised pilot house, a five foot tall ladder is all that is needed to get on to the roof. I fabricated and welded some brackets to the salon wall to pin the removable ladder to. It's hard to describe it now, but because of the bulwark, and how I plan on working the salon roof hand rail, this will be a safe, secure way to get up on to the roof. 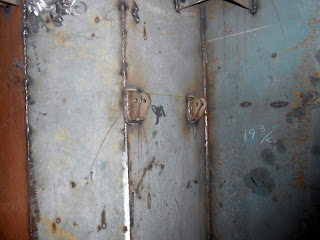 I was going to get fancy and use a torsion spring to have the ladder self stow up on the roof, but my short time frame killed that idea and I decide to stow the ladder on  stainless post welded to the front of the wheel house. The forward  rake of the wheel house windows along with the almost 5' distance to the Portuguese bridge will allow all to pass by this area without bumping the ladder. It will make more sense once the super structure is welded to the hull. 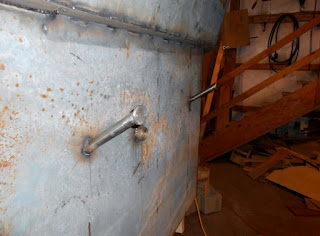 Because I moved the aft salon wall, I had to cut the panel that extends down the salon line towards the aft deck. One of the boarding doors conflicts with this panel, so I cut it to fit. I gave this cut a nice looking radius where it meets the aft deck roof. It was important to me to keep some protection of the aft salon wall at this area, so we still have an inside corner where I cut the panel to accommodate the boarding door. Because both the port and starboard side panel are 3/16 material, I decided to treat each edge with a 1/2" stainless round bar. The round bar treatment should come in handy on the side where the boarding door is as this area will get some abuse. Hopefully, the stainless round bar helps with decreasing my  maintenance painting. Every exposed, exterior edge on board, has a 1/2" stainless round bar welded to it. 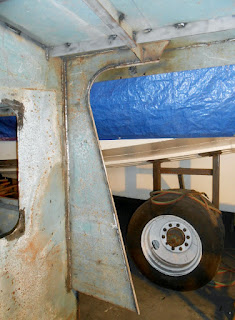 I used 70 lbs of .035 welding wire to build the super structure. I'm not for sure, but I think I drilled darn near 500 5/16 holes for bolting framing lumber to the steel frames. I might have drilled more holes, but I'm going to order 500 2"x1/4" carriage bolts, nylock nuts and washers and see how that works out.

The last job I did to get the super structure ready to begin paint prep was to have my daughter and her friend Olivia walk around on the roof so I could fix the six or seven areas that were "oil canning". All that was required of that job was to find the offending areas, then weld a 1.5" flat bar between the longs and pull the roof sheathing down and weld it to the flat bar. Pretty easy job, but it still took us about three hours to wrap it up.

As anyone can imagine, I'm glad to have this part of the job behind me. Paint and paint prep is going to be nasty, but I can now see the bitter end. Maybe by early October, I'll be able to post some sort of smiley face as I should be starting to take the front of the barn off.