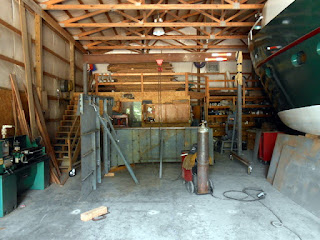 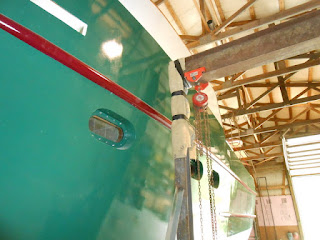 The first step in getting serious about building the super structure was to build a gantry. The left over 4" beams from the building cradle strong back provided most of the steel to do the job. The main lifting beam I had saved from the gantry I used to build the hull. Because things are getting tight in the shop and the gantry just fits between the metal lathe and the hull, I had to pad the gantry with a canvas tarp to prevent it from gouging the hull and causing me some serious paint repair. I"m so glad I decided to do this as the gantry has already bumped the hull. I can say that the rub rail is working. 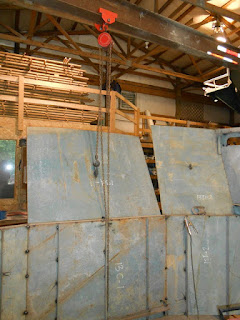 The first thing I did was establish a center line on the barn floor, then squared another line off of that. The squared off line became the line for the wheel house front. Positioning the various panels in relation to the line and bracing them was about all it took to get the show started. Once all the panels were in place, I then installed the roof beams and the  room longitudinal stringers. The roof sheathing, obviously was the last item to be installed. Because of having all the layout lines laser etched into the sheathing, it was just a matter of putting the blue line on the roof sheathing on top of the  side wall and tacking the sheathing down. 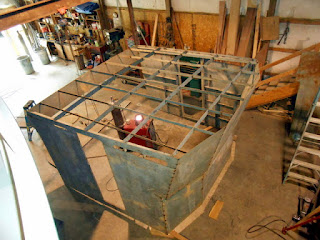 The roof sheathing is what squares up the structure, so paying attention to detail for this part of the build was a key strategy. I first tacked the sheathing in the forward corner then worked my way down one side bringing the side wall to the layout line and tacking the pieces together. Because the roof sheathing is now tacked to the side wall on the layout line, I then started to bring the  forward part of the wheel house to the layout line of the roof sheathing and tacked it in place. I started this process from the same corner. A lesson one learns quickly with metal work is never tack yourself in to a corner...always start from the closed end of something and work your way outbound. The other strategy with metal work is to tack all your parts together first, and leave the serious welding until  EVERYTHING IS TACKED TOGETHER.  Welding generates serious heat and caused the metal to move quite a bit. Final welding before you're finished fitting will only cause one grief. 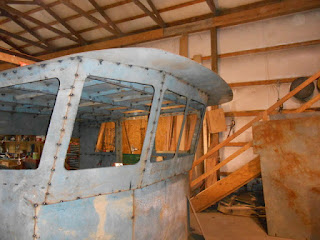 Now that I had 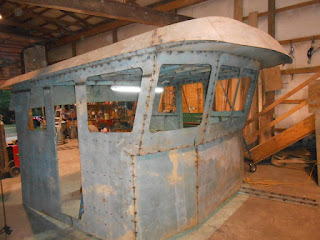 two  panels tacked to the line, the third panel easily moved to the line and was tacked. I then installed the aft part of the wheel house and the box was complete.

This part of building the wheel house went together rather quickly and only took me about a day of work to get it finished. 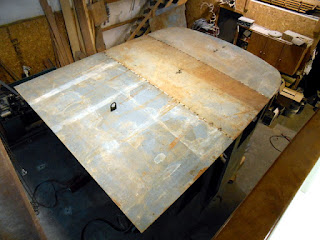 The trim for the roof section was another story. The trim wraps around the wheel house and creates a drip edge to keep water from running down the sides of the wheel house. The forward piece of the trim extends down over the room sheathing a little further than the side trim, and  creates a bill to keep the sun out of the captains eyes. It's the exact same as wearing a hat, and not that I see it installed, I love it. The other piece that gets installed to complete the trim is a piece that angles up from the room at 45 degrees, and welds to the bill. This 45 degree piece 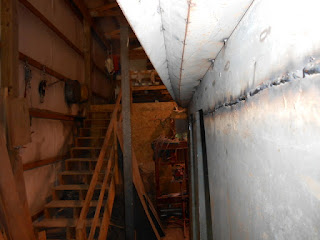 creates a gutter on the inside of the roof and also stiffens the bill piece of the trim. The gutter piece is another nice detail that will make painting and maintaining this part of the boat easier. There are no tight crevices for bad things to start working against me and everything is open and easily reached. This same gutter detail will be repeated on the salon roof, and all the rain will  travel this course and discharge overboard without hitting the decks. There will be a lot of rain running this path, so I need to have a way to capture it and get it in to the water tanks if the need arises. All the trim parts when installed ended up having funky angles with compound bends. The funky angles and compound bends required some patience, and about as much time to do as assembling the main wheel house panels, but in the end it was worth it. All of the trim is fair and  should paint up nicely.

I"m ready to start on the salon, and once that's in place, I'll final weld all the seams for the 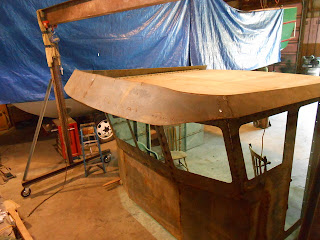 super structure. Because the deck of the boat falls from bow to stern, the back of the wheel house is sitting on the barn floor with the front up on some blocks. Before I can assemble the salon, I have to jack up the wheel house the same distance as the step that is decks. I could leave it as it is, but that would mean being crouched over as I build the salon, and that won't work for me. I'll probably end up putting in a temporary floor in the wheel house to make painting the inside easier. 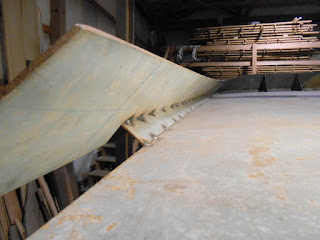 This picture shows a little more detail on how the gutter is formed and how the designer projected the trim to hang over the wheel house walls and create a drip edge to keep water off the wall. I like the way this was cut, and I love how fair and subtle the curve of the wheelhouse wall is. I actually think I found my first error in the cutting file. The trim you see to the right is about four inches short of where it needs to finish. I'm not going to do anything until I have the salon welded to the wheel house. If this is a cut file error, it won't be that big a deal to fix by extending these two pieces another four inches. 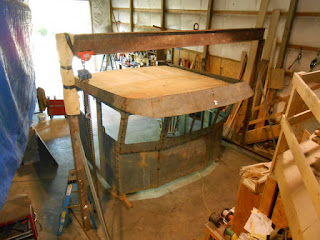 In case anyone is curious, I now have a tarp hanging off of the hull to prevent any damage to the paint from grinding and other things I'm doing while building the super structure.