Having put a hurting on my pile of air dried Cherry lumber, and since I'm going to be finishing the salon and wheel house next winter AT THE LAUNCH SITE it was time to replenish my inventory. I really should have done this job over the Winter when the trees were dormant, but such is life. 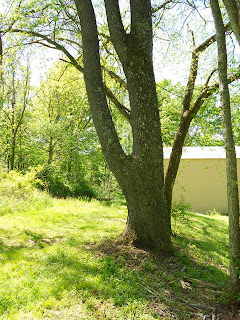 a pretty nice Cherry tree growing along side the barn that I've been eyeballing for the last year so, and after much thought,  I made the decision to harvest it. There are plenty of trees on our property, and 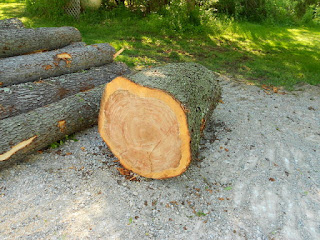 while this one will be missed, it's going to good use. All the lumber will go into the boat build, and the wood from the top will be used to help heat the house and barn this Winter.  My interest in this particular trees was mainly for the large diameter trunk. The trunk was about 44" in diameter and split off into a nice crotch. The crotch didn't appear to be cracked, and had a nice "U" shape to it, so it should work well for making table tops. The tree also had  two leads both with decent size to them, and looking up in to the tree it was obvious there was some board footage in it. I knew the tree was old, and the risk of such an old tree getting storm damaged was real. Cherry trees, with their shallow root system are susceptible to being blow over.

After I felled the tree and cut off the usable timber, I used the loader with forks to bring the logs to the yard. I've always painted paraffin wax on the fresh cut ends of all the logs I harvest, and it's my belief that the wax helps prevent the wood from drying to quickly. 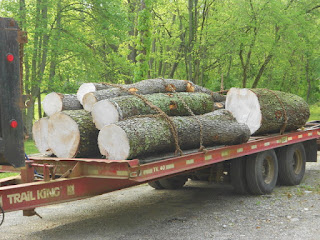 A lot of moisture escapes through the log ends, and waxing the ends helps seal the end and helps prevent the lumber from cracking.  Because I'm afraid of fungus growing in the log, I don't like to let them sit to long, so once they were waxed, I loaded them on to my trailer for the trip to Carl Claypools saw mill. 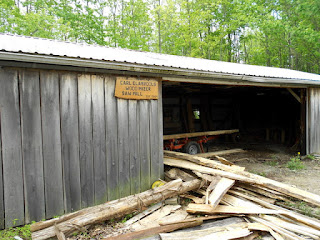 in the next town away from us, does a nice job sawing, and knows how to use his saw. He drives around his place on restored tractor with his dog "pekerwood".  "How come pekerwood always  has a scraped up nose  every time I see him" I asked Carl. "Well I guess he keeps putting it where it don't belong" Carl answered after his poorly aimed shot of tobacco juice missed a wasp. " You ought cut that big crotch log into 2" slabs and make some coffee table tops" said Carl as he felt the log with his three fingered hand. 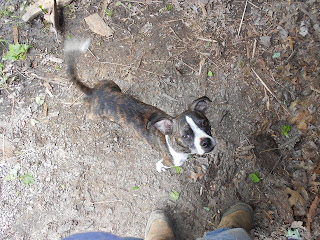 "So you think we should cut the crotch log in to eight quarter stock, and the rest of it into four quarter eh Carl" I asked. "Sounds like a we developed a plan, so now I got to get going and plant some corn" said Carl. " You payin cash right" Carl shouted as he walked towards the tractor. It sounded not much like a questions but more as a reminder. The work order was in, Carl was going to cut the crotch log into 2" stock and the rest of the timber into 1 1/8" stock 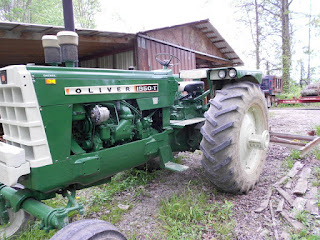 A week or so later, Carl called an told me my lumber was ready. " Damn if you didn't get over 1000 board feet of lumber" Carl said as we talked on the phone. " I also cut you some sticks so you can get it stacked as soon as you get it back to your place" Carl told me. Before we hung up, Carl let me know I owed him $300.00 for the work, and that cash was the agreed upon method of payment. 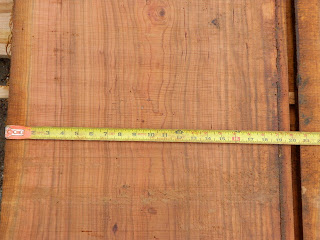 I stacked the lumber in to three piles using the sticks Carl had cut for me. I was happy to see I had quite a few boards that were 20" and a bunch that were 15" across. Most of the widths are 10 -12", with very little under 8". The wood has nice figure, and is dripping with character. The crotch log turned out nice, and most of those 2" slabs are 28" wide. He sawed some of the log "wild" which means he left the bark on it and as Carl told me " that bark on them slabs could make for an interesting table top, if a guy would learn how to think out of the box". 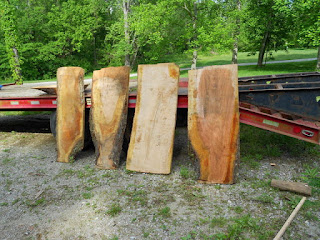 I'm happy I have my wood inventory replenished,  and like I said above, I'll be burning it up next winter. I'll have to keep and eye on how dry the wood gets, as I doubt it won't be dry enough until late Winter or early Spring. The 2" stuff for sure will not be dry enough until the following winter, but I can wait on that. I'll put the lumber up in the loft this week and in another month, 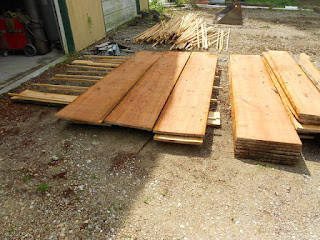 I'll aim a low powered fan at the pile and try to help it dry. A good rule of thumb is air drying takes one year per inch of lumber to get it down to 7% moisture. I have about 400' of dried lumber left, but the choices are getting skinny so I needed to do this. The lumber I have dried will build cabinet door frames, and  cabinet face frames, so I'll have plenty of stock to get started on the galley. Having a nice supply of lumber of this quality for the price I paid goes a long way towards keeping me under my non existent budget.

I want to use the 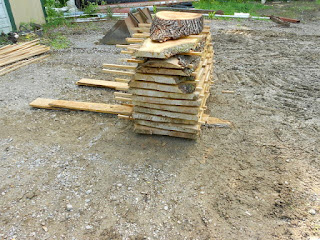 2" stock to build a coffee table between the two comfy chairs that will be in the salon. I also want to build a table for the back wall of the wheel house using the 2" slabs. The dinner table will be larger than the other two tables, so I'll use some of the 4/4 stock for that job.  I want a real old time shippy look to the wheel house and salon, so I plan on using all wood for the interior with the only painted surface being the bead board ceilings. 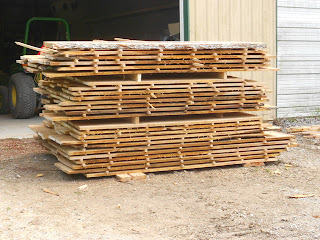