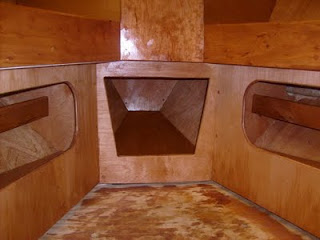 There are a few things that could be changed in the guest cabin's wood work; some things that I can change, somethings that are not worth changing. One thing that has bothered me and that I was able to change without too much difficulty was the shape of the lower cubby. Just to keep readers oriented, these cubby bins are under the two lower bunks.

The lower center cubby was the first cubby I built, and I was never happy with how it looked, but I pushed on. I had an idea to give the cubby a cover, and I was intending on the cover dropping in to place and being held fast by a wedge screwed on the back of the cover, hence the shape. The more I looked at it the more it bothered me. The shape was wrong, and the wood grain was running the wrong way. With the shape of the drawers, the race track shaped cubbies, and the trapezoid cubby, the room was beginning to look like a pre-school "guess the shape g 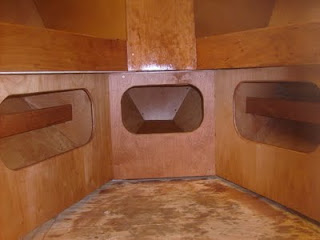 Changing the shape required building another panel. After consulting with the design team, I fired off a memo to the design team and their response was immediate and firm. The design team felt since the length of the new cubby was shorter than the other two cubbies, the design team insisted that us minions here in the fabricating department should use a coffee can to shape the radius corners vs the five gallon bucket we used for the longer cubby. Not any old coffee can mind you, rather we should use the jumbo size favored by large families and insomniacs.

The cubbies are actually pretty large in regard to how much a person could stow in them. The port and starboard cubbies each have a shelf with a two inch fiddle to help keep things in place, and the space goes back under the bunk a good arms length. The cubby is not as convenient as a drawer, but it was a sensible solution to the space needed. The cubbies were also fast and economical to build, and they look damn good from the view of my well equipped, palatial cabin.

I find it easier to move forward once I get the nagging problems off of my plate.
Posted by Conall at 3:48 PM