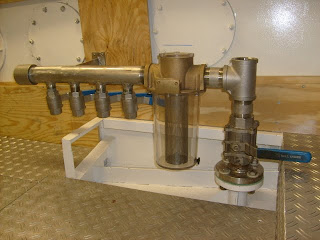 I finished the sea chest, and installed it.

I've been hunting for a used sea strainer, and finally found one on Ebay. The dude I bought if from had purchased it for his boat then had a change of mind. The strainer is in new condition having never seen the water.

I welded a leg on to the manifold that I will screw on to the fixed panel that covers part of the fuel tank. I'll be able to access the fuel tank clean out without having to take the sea chest apart as the panel I'm using as a brace is adjacent to the access panel.

The final elevation of the top of the "T" is 1" below the water line ( DWL). You can see a line drawn on the fuel tank inspection cover that represents the DWL. I"ll have to extend a nipple up above the DWL, and put a cap on it. Maybe I'm not seeing something in my approach to using a T vs a 90, but I like being able to peek down into the "T" just to see what I can see. I also used a coupling on the end of the manifold that will have a plug in it, so I easily be able to expand my sea chest by adding on to the coupling/manifold. I can also expand the sea chest via the T, but I'd have to go with a self priming device due to elevation concerns.

I think I'm going to remove the plastic bowl on the sea chest and stash it away while I do more fitting out in the engine room. I also have to cut away the piece of angle under the third valve as it is no longer needed and is sort of in the way of the last valve. I think I'll extend the sole under the sea strainer now that I know what the final elevation is going to be. As you can see from the picture, I have enough room to put the valve handles behind the sea chest. Having the handles in the rear is really dumb luck on my part, but nice in that the handles are out of the way and won't snag one as they move past the sea chest.

Now that the sea chest is complete, I can finalize the generator connections.

I like having all my thru hull fittings in one location that is easy to get to. Every time I enter the engine room, it will be impossible not to look at the condition of the sea chest.
Posted by Conall at 8:18 PM