Gragodeo is for sure not cruise ready, but it was good to have some fun with the kids, spend some time on the boat and start to get a feel for how she's going to perform. 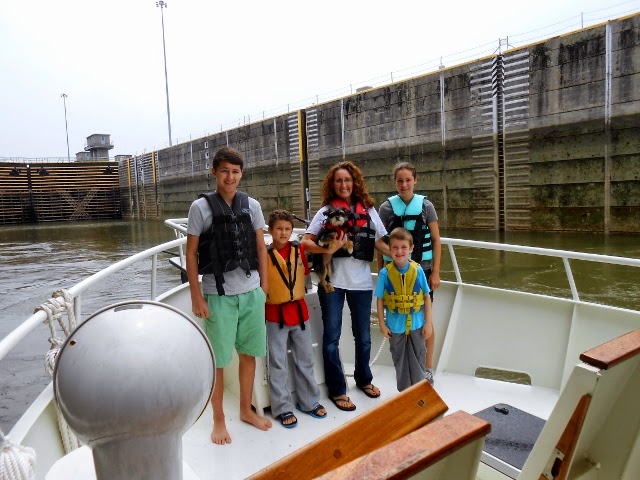 One of our favorite spots to anchor in the Ohio River is in a town called Manchester, which is about 70 miles up river from where we harbor. The attraction of Manchester are the islands which are part of the Ohio River Island wildlife sanctuary park. This part of the river is truly a gem, and should  not be missed by anyone traveling the Ohio River. 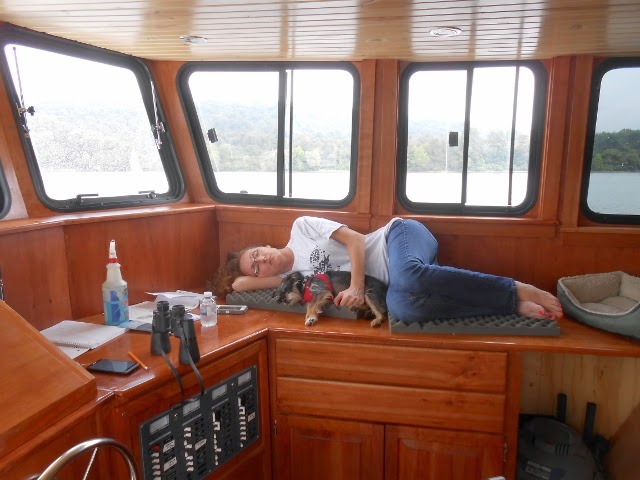 With Manchester as our destination, we loaded all six of the kids, kayaks, the inside dog, and our wet bike, collected the dock lines and made for Manchester. All the pre flight checks took longer than I expected, and by the time we were ready, the morning was fading. Having been off of the water for three seasons, I cant tell you  how good it felt to be watching our stern wake on the pond still Ohio River. 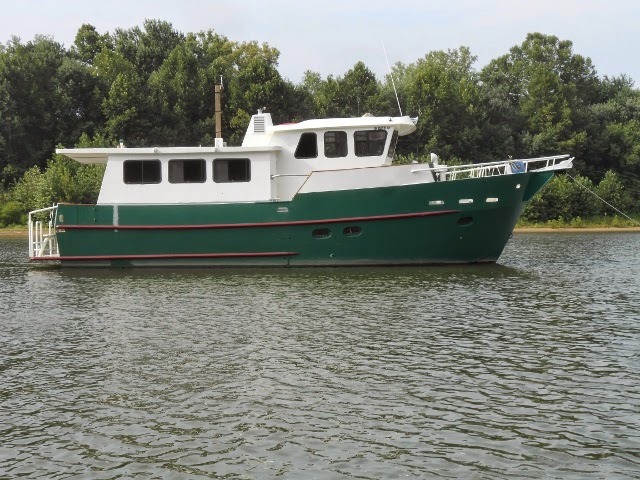 The first thing I noticed about how the boat cruises is how quiet it is. All the insulation seems to have paid off. I have a decibel meter on my phone, and checking levels in the wheel house found us with 64 decibels. If I closed the windows, the decibel readings fell to 60. The same level of decibel is in the salon, and a bit higher at 67 in our cabin adjacent to the engine room. 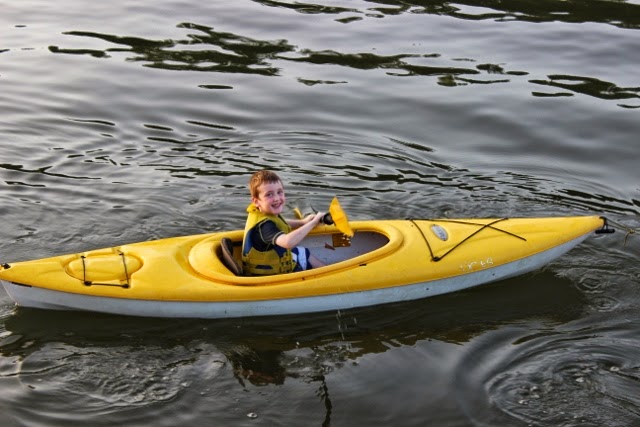 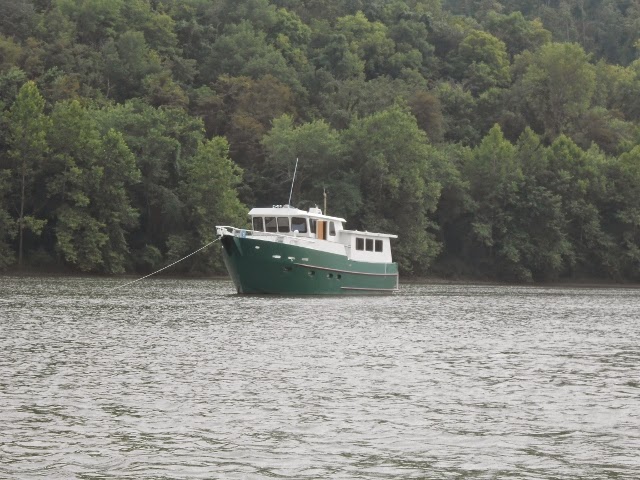 After our over heating event on the trip up from Washington Marine to Skippers, I'm a little gun shy regarding trusting the cooling system. Even though it's her second trip out after bleeding air from the cooling system, one can't help but being apprehensive. I was happy to see the temperature gauge holding good @ 190 degrees after the first hour of running her @ 1700 rpm. I found myself heading downstairs to look inside the engine room door about every half hour. My "looking through the glass" checks were to see if all looked good, verify no water on the sole, and check the temperature of the engine room itself via the thermometer we have stuck to the inside of the door.

After two hours of running Meldahl lock came in to view. Even though I'd done radio checks before this day, I was concerned about our new radio. Two  miles from the lock, I called Meldahl on 13 to say good morning and to inform him we were an up bound pleasure craft requesting to pass through their lock. We were happy to hear the lock master reply telling us to "keep it coming" as he'd make the small chamber ready for us. By the time we got to the end of the lock wall, the doors were opened and with the green light lit, we idled  into the chamber. Having not been through the locks in a few seasons, all were a little rusty on how best to get secured. We've always used our mid ship line, and today was no different. Having a fender tender on the bow was important as we did not know how the boat would land against the lock wall. Now we know where she'll hit, so placing the fenders will more secure in the future. 45 minutes from calling the lock master to exiting the chamber... you cant beat that type of service. 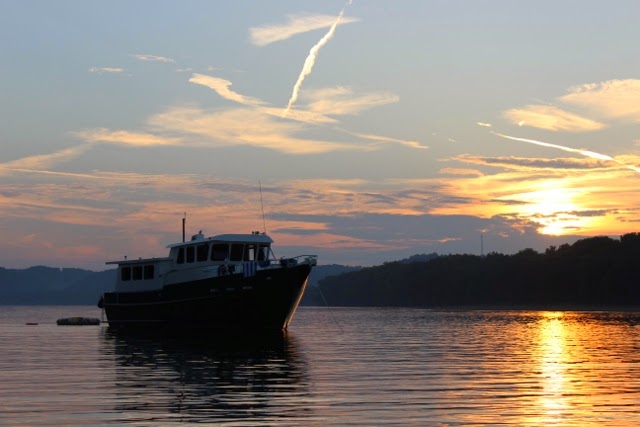 Once out of the lock approach, we bumped  her back up to 1700 rpm and settled in for the five  hour run to Manchester. The boat tracks straight as string. Sitting in the bar stool captains seat, I had to only apply minor touches to the wheel to  hold course. It seems that one is able to hold a course for 3-5 miles on river before choosing another course to make a bend. For the most part, the boat would hold course for at least this long, and once I got the feel of her, I only had to touch the wheel to alter course through the long bends. She steers great. 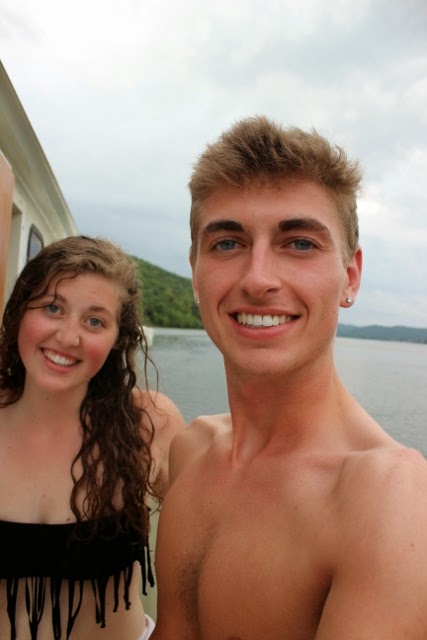 Noting the mile markers, and paying attention to our GPS on our radio ( we don't have a chart plotter or dedicated GPS yet) we were averaging about 7.3 knots @ 1700 rpm. We were headed up river against a slight current, and pulling a jet ski, so I guess this is an OK speed. I'd been a bit happier if we were getting hull speed at this RPM, but I think we're a bit under pitched, and there's not much I can do about that this season. 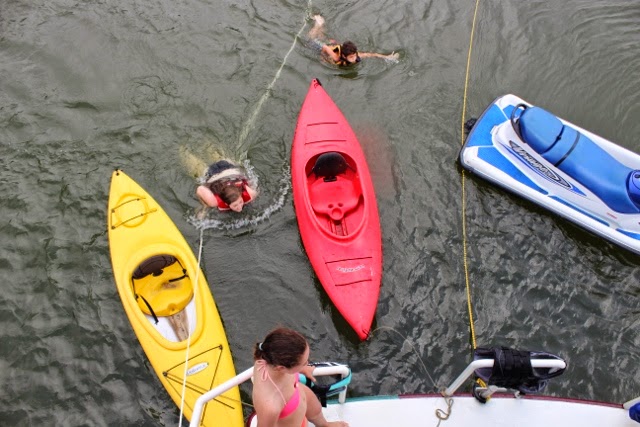 Five hours later, dropped the Danforth in to the silt bottom at Manchester Island to begin our weekend. Once we were settled in, the kids started getting toys in the water and life was good.

After four days anchored having done a few boat projects and depleted our 300 gallon water capacity it was time to head back down river. A lone fisherman stopped by in his john boat to talk about our boat and ask a bunch of questions. We spoke with him for about 20 minutes before we pulled the anchor. It seems everywhere we go, we find  ourselves answering questions about the boat. Because of  how different she looks compared to other boats in our area, fellow boaters are very interested. We even met a husband and wife up at Manchester who knew us from one of the boat forums I participate on. Super nice folks, and I hope our paths will cross again. Life on the water is as good as we remember it to be, and we're happy to be a part of it again.

Heading down river with the lone john boat fisherman following us taking pictures with his Iphone, I was happy to see our speed had increased to 8.7 knots @ our now familiar 1700 rpm. We were now going with the current, and it was making a difference. Even though we ran the generator hard in Manchester, I started to make an attempt at figuring our main engine fuel burn on the way up. It appears we burned about two gallons per hour, using around 17 or so gallons on our 70 mile run. We'll dial those number in more closely as we get familiar with the boat. 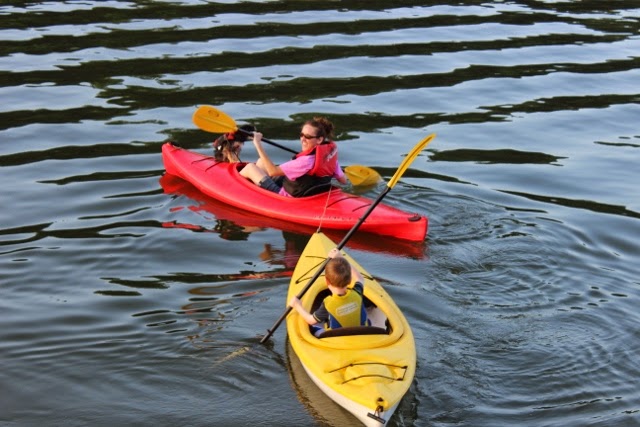 The weather this weekend was a little unsettled, and no sooner than we were loving our 8.7 knots, the wind picked up to 20, and stayed on our nose the whole way home. The river picked up a healthy chop, and for almost all of the day, was white capped. In our previous 30 Carver, this would have made for a somewhat bumpy ride, but in Gragodeo, we hardly noticed the chop. Passing on coming push boats and their 36" roller wake they throw, we would have had to steer into the wakes in the old Carver, but now we find ourselves ignoring the wakes as she hardly even notices them.

The trip down was perfect being out of the wind and comfortable in the wheel house 8' above the water. The locks were busy, and we  had to hold position in the stiff wind for half an hour as we waited our turn. The rudder and steering are extremely responsive, and now that I'm starting to figure out prop walk, we had no problem waiting in position.

The wind held strength as we approached our slip space, and would be on our stern pushing us as we attempted to parallel park in our space. Because of the wind, I decide to call Joe at Skippers to see if he could catch us. We're getting better at bringing her in , but with still being new to us, a stout breeze pushing us in the wrong direction, I was  happy to have Joe help us. 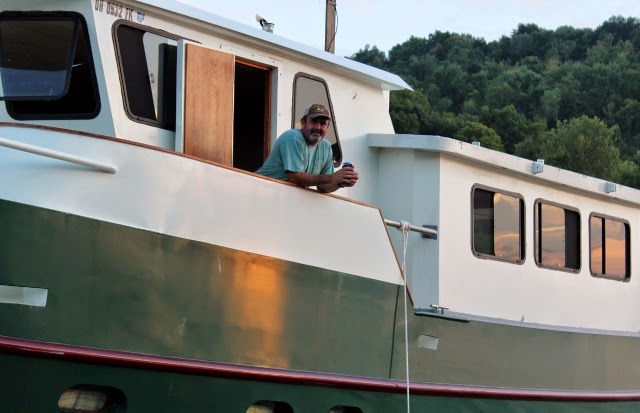 Shutting her down, and cleaning up went quickly, and we were soon walking up the dock with our laundry to our car. She's for sure not "ocean ready", but we had a good first shake down cruise, and there are just a few small issues to look at. One day, she'll be ready for the sea, as we now have the starting at the beginning thing out of the way. It seems so long ago that I was talking to my friend Bill after just having unloaded 40,000 lbs of wheel abraded and CNC cut metal off of a flat bed trailer. 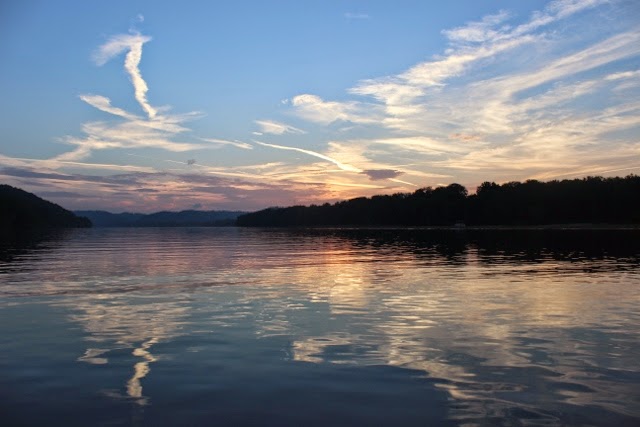