In to the great wide open

Gra-go-deo... Gaelic word meaning forever love. The name's not painted on the transom, but a bottle of champagne has been busted on her bow, so it's official in our book. 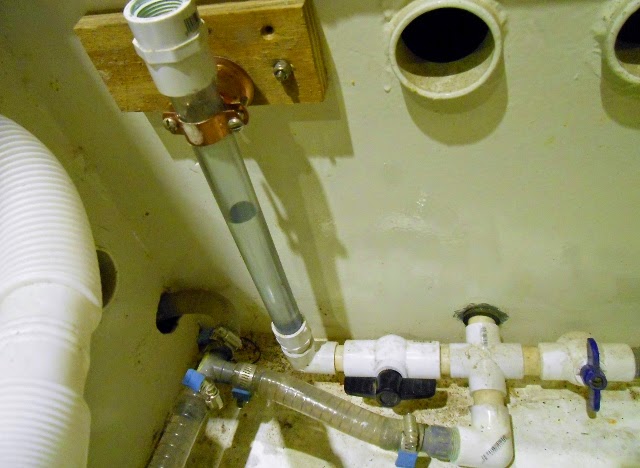 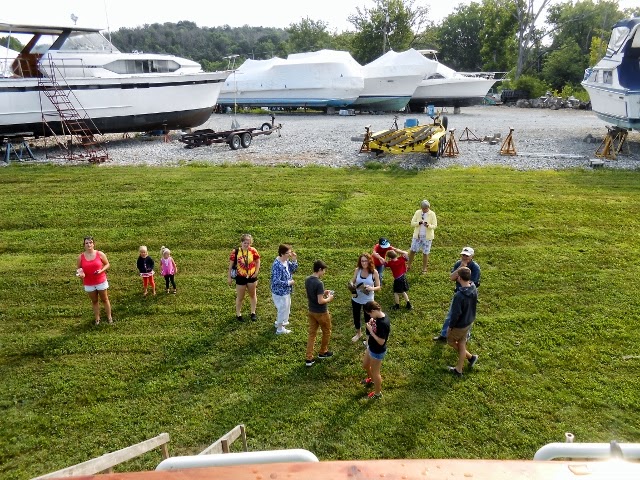 Preparing for getting her in the water found me working late in to the evening's for days prior Wednesday. No matter how one tries to approach getting stuff done, it all takes time, and there's just not enough hours in a day to get everything completed. So for the last few days, the focus shifted to getting her float ready.

As per recommendations from the designer, I loaded 300 gallons of fuel on her and a good guess at 1/2 of her water capacity which is around 150 gallons ( I"m guessing 300 total gallon water capacity). When It came time to load water, I didn't have a 5 gallon bucket handy to try to  measure the flow rate of the boat yard's system, so I had to guess using my home made water tank level monitoring system. 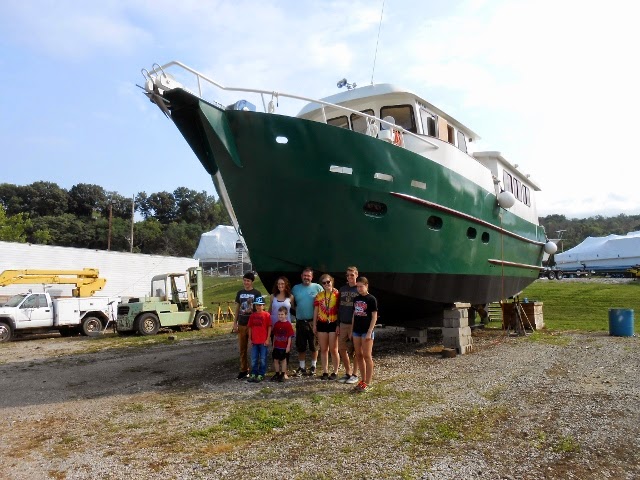 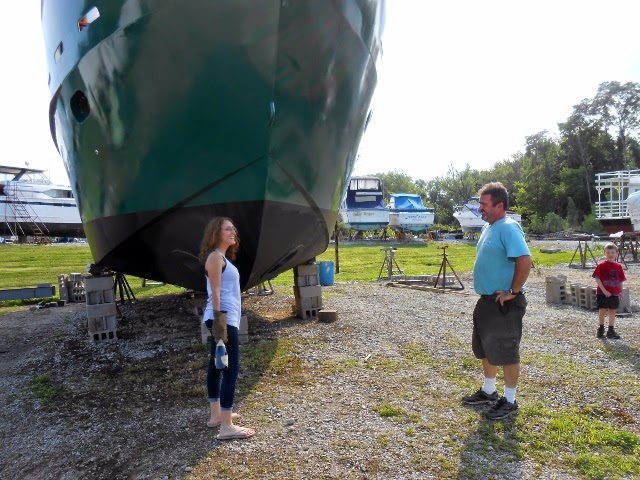 basics of this is that I installed a "T" in to the water pick up line where it heads to water pump along with two valves and a clear tube stand pipe on the water tank side of the "T". To check the water level, I close the valve to the pump, open the valve to the clear stand pipe, and loosen the cap ( to get rid of the air lock in the clear tube. More on air locks later) so that the tank water level can be visible in the tube. I'm proud to say that the site tube worked great and I was easily able to guess the water level as I could watch it rise in the tube. 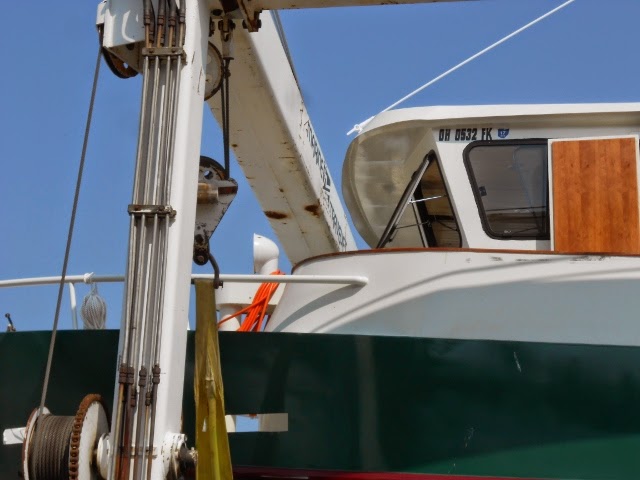 The only problem I had was that I forgot to dope up the lower threads on the site tube, and when I closed the valve, the water in the tube trickled in to the bilge and collected at the bilge pump. This little bit of water in the bilge had me believing I had a water tank leak until I noticed the empty  tube... big relief. Along with water and fuel, I placed 2300 lbs of ballast in the designated area to save from carting it down the dock at a later date.

The fuel went in to the boat good. I had a truck bring me the fuel and the driver was apprehensive as most boats  he fills cause him grief. The flow rate on his truck was capable of 50 gallons a minute. The two inch fill pipe I used along with the 1" vents allowed the driver to quickly fill the 300 gallons with no spill or burping of the tanks at all, and he commented it was one of the best boat fills he done. I put all 300 gallons of fuel in the port tank to get the driver of site quickly, so I had to use the transfer system to move 150 gallons to starboard, and the system worked great moving 4 GPM. I started a log of fuel and transfer amounts, as I have no fuel gauge, and will have to rely upon transfer log data and a measuring stick to monitor fuel. 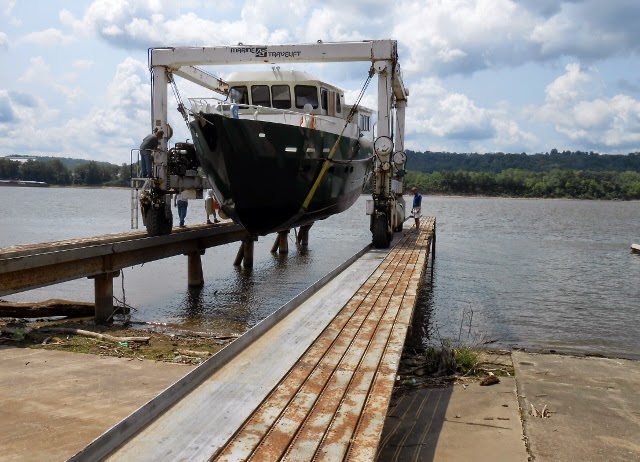 Launch day came quick, and I was doing some critical work up until that morning. I invited an engineer friend of mine to help me with the launch duties as Shanon had her hands full with the kids and other family members.

A few problems with picking the boat arose, but I can't say that it was unexpected as no one has ever picked this boat before. The wheel house sits forward and it order to get the slings under the bow far enough, the travel lift was too close to the brow on the wheel house. As she was being lifted, she swung forwards, and the brow hit the travel lift,  slightly bending the brow and one of the horns. She had to be put down to re position the slings, and tie the slings off as to not allow the front sling to let the bow slip out and have her drop to the ground. The damage is minor, and can easily be repaired. I will say that if it were a fiberglass boat the damage would have been more as I think some plastic would have cracked giving one a few day repair. In the case of our boat, a little persuasion on the brow along with a few brush strokes of off white epoxy paint and no one will be able to tell. The air horns are inexpensive Ebay finds, so no big deal on that part. On a project like this, things happen, and that's just the way it is. Gregg at Washington felt more bad at this than I did as they take pride in what they do, and they don't hit boats as they move hundreds a year around their yard. 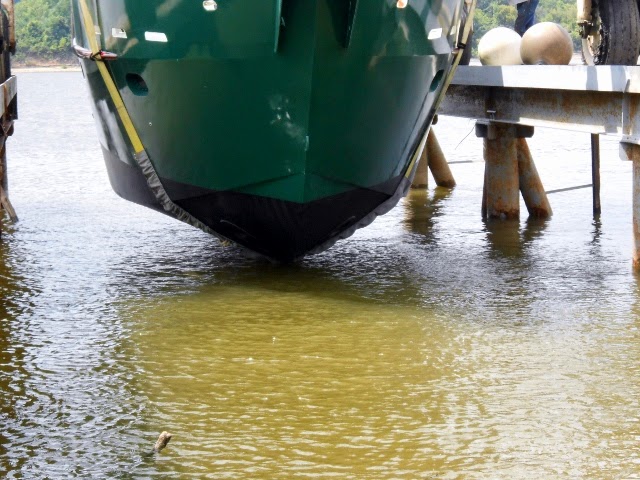 Watching her drop in to the water found me a bit nervous along with relief. A bit part of my life was being verified and I was happy our family was together to watch this. Other than myself, no one in our family has seen this type of operation, and they were in total amazement watching "the boat" being picked like a toy and lowered in to the water. I took pictures as she touched the water, but I was more interested in getting on board to check for leaks.

The area for leak checking were the PYI dripples shaft seal, the bow thruster tube, the depth sounder transducer, the engine room sea chest, the rudder post, and the holding tank discharge sea cock. Making a big day even better had no leaks found and everything was bone dry.

Stepping back on to the dock to look at the water line was a little disappointing seeing her down on the water line on the stern. The designer told me this model launches stern heavy, and he was for sure right. The swim platform looks good being about 16" out of the water, and the bow looks about perfect. I'll talk to the designer in the next few days to get some insight and find out exactly where we are sitting.

Putting her in and out of gear a few times found the transmission working as it should, so we moved her from the lift pit to the dock. The next few hours found were spent cleaning up and doing a few jobs such as commissioning the generator. 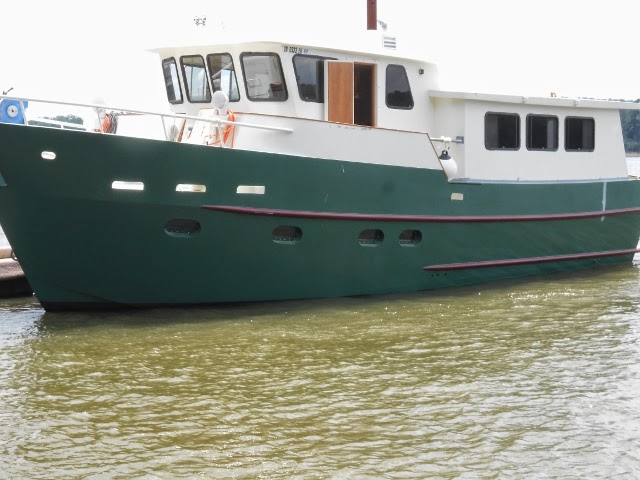 What I really should have been doing was putting a load on the engine to see how the temperature was going to hold. I had topped off the cooling system weeks ago, and had noticed after a few days, the coolant level in the site gauge would drop, so I added more coolant. Knowing we did not have a leak, I figured there was air trapped in the keel cooler, and it would work it's way out once we got her to operating temperature and coolant was circulating. The problem with my thinking was I forgot about how pumps can sometimes respond to air inline, and get air locked. This problem reared it's ugly head two miles from Washington in the form of the high temperature alarm screaming at Shannon while I was in the engine room checking things out. One side of the cooler pipe going in to the hull was hot, and the other side was bone cold as a stone... no circulation... probable air lock.  After shutting her down, throwing the anchor, and adding coolant, we decided to limp back to Washington. Watching the temperature gauge hold steady at 190 while turning 1200 rpm, we changed course and decided to head to New Richmond. We had ten miles to go and were making 5 knots, so once the over heating danger had subsided, it turned out to be great little cruise, and a great way to decompress.

This boat for sure does not handle like our 30 cruiser, and parallel parking it between two other boats found me calling Joe at Skippers to come down and grab our lines. Our first attempt at getting the stern to kick back to the dock had me discovering just what "prop walk" is. Besides prop walk being a odd name, it's darn frustrating. Docking did go off without a hitch, but the learning curve has found me again.

I'm typing this on the morning after and find myself happy beyond words. A few bugs have to be worked out, but she's in the water and ready to begin finishing. The boat build for sure will continue on through the summer but with a much improved view. As I was alone last night shutting things down, I  heard some strange noise.... water lapping against our steel hull...perfect.