I should probably start by saying I'm going to stop crying about the winter that won't end. I know it's close to giving up the beast, but after the 6" storm we had two days ago, and lows in the single digit this week, it's fighting to the bitter end. The high today was around 26 degree F, but with the sun gathering strength, the cold air temperature can no longer sustain the snow, and it's quickly receding. Given the air temperature is still below freezing cold, having the boat facing south, along with the strengthening sun, heats the inside of the boat up quickly, and I really don't have to run the heater at all. 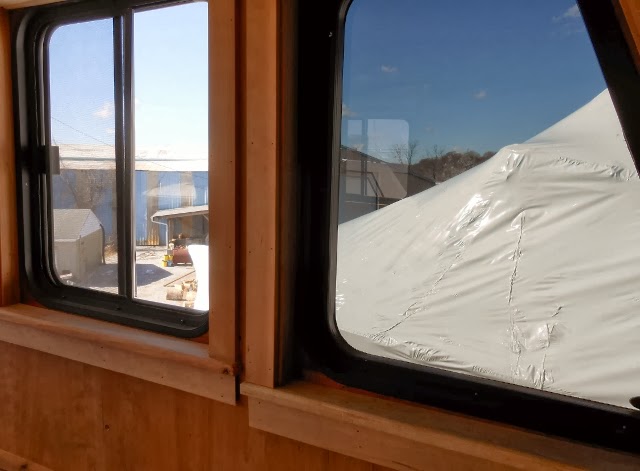 Some more progress has been made in the wheel house, and I'm inching up on getting the wood work completed. The layout was finalized, and more compromises were made. We were pretty dead set on having a 240 volt clothes drying machine and a 120 volt clothes washer, but in the end, having two units just took up too much space. In the space where the clothes dryer was going to go, I built a base cabinet with two large  drawers, and two doors underneath. Because the drawers are so wide, I used 3/8 plywood for the bottoms vs the usual 1/4". I'm planning on the drawers being used for paper charts and other things navigation.  The drawer fronts are not installed yet as I just  fitted the boxes in place. 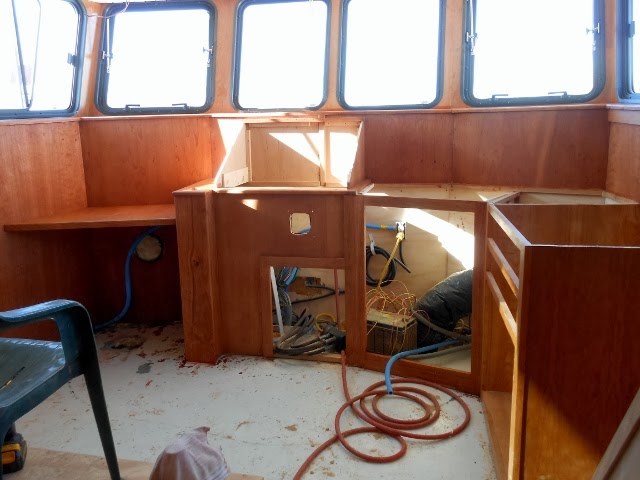 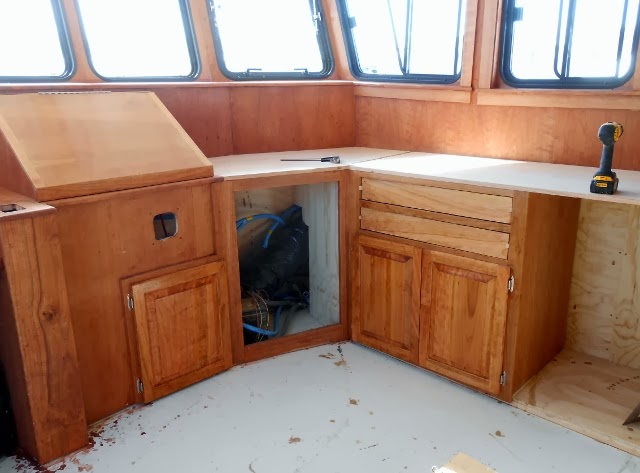 Just aft of the new base cabinet is the opening for the compact LG washer/dryer combo unit. Out of all the units I looked at on line, the LG units have the best, most consistent reviews. I'm a little leery of it's ability to dry clothes with only 120 volts, so I have it in the back of my head that a decent working clothes line might be in order... probably something on the roof running off of the mast.

The large opening starboard of the instrument dash area is where the electrical distribution panel  is going to go. I had some sort of cut twice/measure once thing going on and screwed up the door that houses the electric panel. I found out this mistake today as I was fitting all the shiny parts I've made in the last week.

I have the wheel house counter top fabricated and dry fitted in place, but not not yet installed. Before the top gets installed,  I need to land all the wires on the bulkhead behind the distribution panel door. I used THHN for the primary wiring behind the walls, and will land all that on terminal strips. From the terminal strips, to the distribution panel, I'm using a flexible, tinned, marine wire. I have about 90% of the boat wire pulled to the area under the dash, and landing it with the top off is going to be  huge vs lying on my back. I realize I'll still be doing some wiring while laying down, but I want to get as much done while it's relatively accessible. 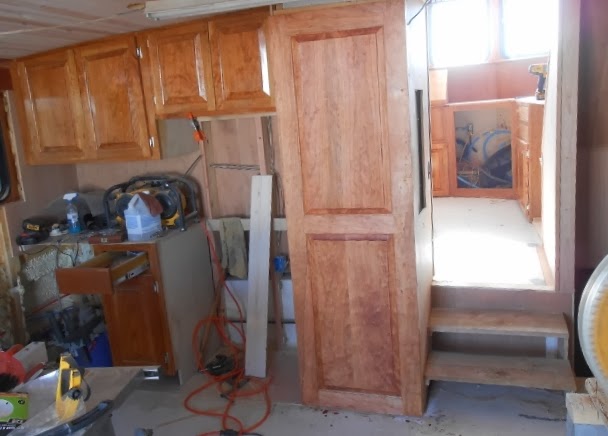 While I was fabricating in the barn last week, I decided to make the panel that finishes covering the dry exhaust/intake stack. Because the stack is such a large fixture, I decided to make this panel a raised panel. A large, flat piece of plywood just didn't feel right. The cherry veneer plywood is for sure nice material, but in my opinion, is a little too perfect. The air dried cherry I am using oozes character, and really puts the plywood to shame in regard to interest.  Being in the center of the room and such a visual element, this large raised panel looks spot on.

Here's to the coming Spring.