Weather tight ( for the most part )

I'm going to need to get back to work to get some rest. The last couple of days have found me dodging my paying work obligations in order finish welding the super structure to the hull and making her weather tight. Dealing with the heavy dew forces one to finish certain jobs in the afternoon or deal with repairing some rust damage the next day from the dew. 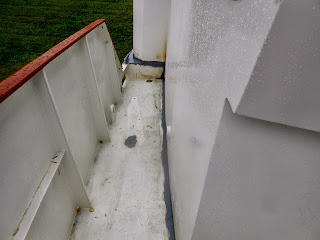 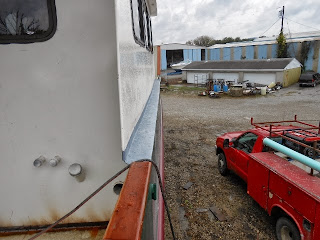 With the superstructure just sitting on the hull, we had a 2" gap where the forward wheel house wall hits the deck, a 0" to 3" gap where the port side wall lands on the salon hull flange, and the whole thing had to be pulled back more than an inch. We had one corner, starboard,  where the salon wall turns 45 degrees to head aft that was pretty close to the mark... here is where we started the fit up. Welding a cleat to the deck, and using a ratchet puller, we pulled the structure about 1/4" to hit a mark, and tacked it. After a few tries, we finally found the right angle and location for a welded cleat to pull the salon wall forward to land on the 45 degree 8" long wall,  and laid in some heavy tacks. Those two seemingly insignificant  pulls un-twisted some of the salon, and we now found part of the wheel house starboard wall firmly on the fore deck vs the two inch gap we had only 2 hours ago. Now that the wheel hose was down on the deck, we  used the Port-A-Power to push the wheel house over to locating points and tacked it down. All the CNC parts had lay out lines etched in them upon arrival from the cut shop. Before I had painted the wheel house deck, I had drilled dimples about every two feet on the  layout lines so I could locate the wheel house layout lines through the paint when the time came. Being able to locate a part is critical and having referenced locating points saved the day. With the starboard side of the wheel house now tacked down and in it's exact position, we moved to the salon and began pulling the wall to meet the flange joint at each frame. After we had the wall tacked on the frame joints, we moved between each frame, and pushed the flange up to meet the wall, then tacked.  Moving over to the port side, we used the Port-A-Power to push the whole structure back, and were feeling pretty good as it just about fell in to place. Having the starboard side right on the money was forcing the port side  in to  place. Once we had both port and starboard side tacked in to place, we then worked on the end walls, which was just a matter of making sure they were straight with no bows or bellies, and tacked them down. Getting the super structure fitted in to place, and tacked welded, took the two of us about eight hours. 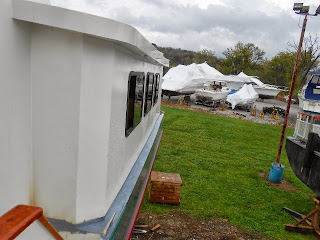 Finish welding the structure to hull joint took a long 12 hours with two welders running. Because of being outside, and not wanting to deal with moving the MIG welder around, I decided to stick weld the job. We used a Miller Bobcat, and an Everlast inverter based multi process machine running off of an 8000 watt generator to get the job done. Stitch welding using 2" welds, and moving around a lot was the schedule. I had spray foamed the inside of the hull prior to all this work, so we had to be careful about catching the foam on fire. The foam is fire rated, and it for sure lived up to that description. Keeping  an eye on the foam with plenty of  fire extinguishers ready was about all we had to do as it self extinguished once the heat was taken away.


Once the welding was complete, we knocked off the slag, ground the welds for fairing, and brushed two coats of epoxy primer. The boat yard does not allow any spraying of paint.  Before the weather gets real ugly, I'm going to get some fairing compound on the welds to finish the joint and give it two more coats of primer. This is all I'm going to do until next Spring in regards to painting the outside.

On both the port and starboard side, we burned off about two feet of hull paint where the salon wall ties in to the hull. This will have to be faired and blended back in to the green hull next spring. 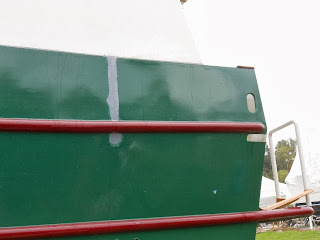 The only paint patching I have to do is on the aft deck of the salon. We've had two days of steady rain,  and this is the only area we did not get primed. Once the rain stops, I'll finish priming this area and scuff and prime the weld zone inside the super structure. Once all that's finished, I have to bolt some lumber to a few short frames, then patch in the foam.

The decks have been blasted, two coats of primer and three coats of acrylic urethane before we moved her outside. I had all along planned on re painting the decks, and after the beating they took on welding the super structure, they for sure will need painting before launch. There is also a lot of soot on the side walls from the stick welding that is going to  have to be washed off. The whole boat is nasty dirty, and once I have the paint patch to a point I'm happy with, I might take a day and give her a bath.

I'm going to have to get back to work this week coming, although this monsoon we just had will probably rain me out half of the week. This flurry of boat building has me feeling a bit tired, but a happy tired as we're getting things done in big gulps.