Porch ceiling, soffit, and some wiring

Historically speaking, this is always a bad time of year for me. Work is back with a vengeance, but funds have yet to start flowing back my way. I'm almost booked up for the rest of the year, and everyone I know that does my type of work is for sure not complaining about the amount of work out there. Because cash flow is not working so well right now, I've had to start using material I've purchased last summer to keep things moving forward. 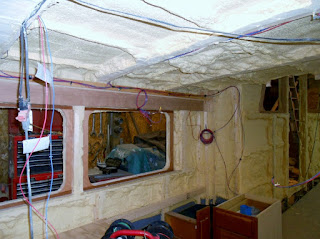 The aft deck ceiling was built using BC plywood which I painted. Because I wanted to be able to remove the ceiling with not to much trouble, I used stainless screws with finish washers to fasten the ceiling. Instead of hiding the joints in the ceiling, I covered them with battens pinned in place with some stainless brads. Because I have so much Cherry lumber in the barn, I made the battens out of Cherry and left the bright with a few coats of urethane. We'll see how the bright battens suit us against the painted ceiling. 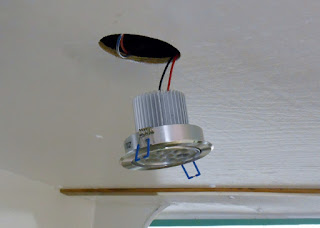 Every light on the boat is LED. Last summer I purchased 40, seven watt 12 volt can lights. I purchased direct from factory in China, and have to say I'm pleased with the quality of the light. The lights are aluminum with an aluminum heat sink. All the machining is top notch, and the penetrations from the wiring are epoxy sealed along with having the wiring tinned. I purchased 40 lights so I could get to a certain discount level, but I also wanted to have spares on board for replacements. I checked every light when they showed up and every light did what it was supposed to do. To date, I have about seven lights working on board now, and I'm totally impressed with how bright they are, how cool they stay, and how much electricity they don't use. 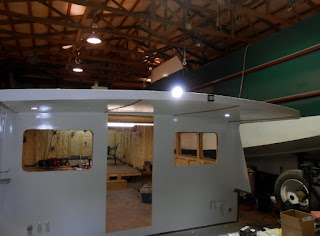 For lighting the aft deck ceiling, I installed two of the seven watt can lights. Because of how the ceiling is framed, I can easily add another light using a fish tape in the future, but I doubt I'll need it as the two lights I have installed give plenty of light. 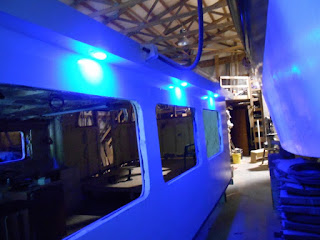 The salon soffit overhangs the salon walls about six inches. I decided to install a one watt LED light over each of the three windows. These lights are blue, and my intent was for accent. I think the lights will look pretty sharp while we're at anchor or at a harbor.

I do  have a design complaint regarding the aft deck ceiling. The trim piece of metal that makes up the salon soffit is about 4" tall. As the trim turns to wrap around the aft deck ceiling, it gets reduced in height to about 3". I don't know why this happens and it could be a flaw in the cut file. I saw this and knew it was going to be an issue when I was framing the super structure but I chose to do nothing about it. What this caused me to do was force the plywood ceiling up at the rear of the aft deck so that the plywood still remained above the drip edge of the trim  piece. The plywood ceiling has a  subtle curve upwards over it's last 18" aft.  Not only does the plywood need to be above the drip edge, it needs to be above it about 3/8" in order to keep the reveal constant around the aft deck ceiling. The other big issue of having the plywood protected by the trim piece is to keep roof water from rolling around and getting to the edge of the plywood. It really did not look that  noticeable until I installed the cherry battens. I can tell you it's a big job to fix and I doubt I"m going to fix it. It really doesn't bother me that much. 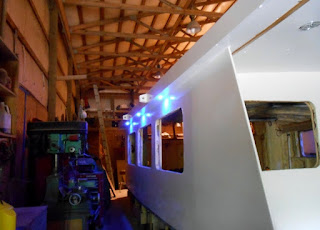 There is really no reason why I can't install ( other than lack of funds) the ceiling in the salon now. Because it's going to go much faster while in the shop, I went ahead and made all the preparations to install the ceiling. The first thing I did regarding this was to make sure all the timber frames were installed to catch the bead boards that will make the ceiling. Once the framing was complete, I located all the lights and light switch locations. The basic layout is that as one enters the salon door, you'll turn on six can lights from a switch by the door. Another switch in the galley will turn on three lights; one above the sink, one above the range, and another above the fridge. There will be another light in the half  bath.

Since I was wiring the ceilings, I decided to go ahead and run the wiring  feeding the switches, and also installed a switch for the aft deck work light, the aft deck ceiling light, and the salon ceiling lights. The soffit lights will be switched from the wheel house and the feed has not been established.

The wheel house will also be switched from a wall, but I want to have some red lights in there along with a few of my already purchased can lights. So given that, I'll probably have two switches for the wheel house ceiling lights.

All my wiring connections were made using heat shrink crimp type connectors. For larger connections where more than two wires joined, I used potted wire nuts. Some purists might frown on a potted wire nut in a marine environment, but I have 100% confidence in them. I've been using potted wire nuts for assembling splice boxes in septic tanks and sewage lift stations for 25 years. I have yet to see corrosion in those wire nuts be and issue and I can assure you that ocean air is no where near as corrosive as the inside of a septic tank. Potted wire  nuts are pricey, but you get what you pay for and they're worth the money.

A large piece of wiring and carpentry has now been checked off of my list. Having good reliable lighting is a must and it feels good to have this part of the project working and off the list. Once the boat is at the launch site, the soffit I just finished will be about 16' in the air, and since I have  no side decks I would have had to use scaffold  to do this work. It was a good thing to be able to quickly do it in the shop while it was only 7' off the ground.