I started the super structure interior 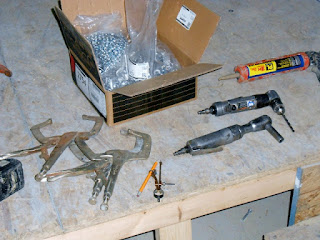 Because I am swamped with paying work, I've taken a few days off of the build. Hurricane Sandy has changed that, and caused  major slow down in my work, so I'm back to the important things in life... the boat build. I have to say that while we are four or five hundred miles from Sandy, we had 25 mile per hour winds sustained last night while  she came ashore.

To begin the interior, bolting lumber to the metal frames is the first order of work. To make it seem like I was getting something done, the first attachment I made was to bolt lumber to the ceiling frames. Because of the camber of the ceiling frames and not wanting to piece things together, I had to use a 2x6 for the ceilings. It seems like a lot of waste, but all the off fall was ripped again for the side wall frames. 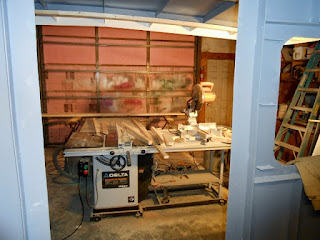 The barn is about as full as it can get and the only place to set up my table saw is under the roof of the aft deck. I had to position the saw so I can make long rips through the door of the salon.

The basic method of getting the ceiling beams done was to clamp the 2x6 to each end of the frame. I then used a scribe set for the gap between the 2x6 and the frame at the center of the frame and scribed the top ( roof  ) side of the cut. Because the frames are so long, and the curve not that radical, I was able to use a circular saw to cut shy of the line 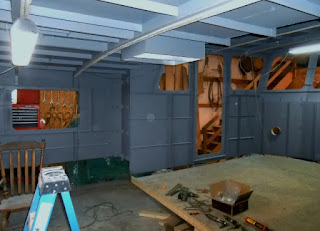 . The cut put the saw in a bit of a bind, but it was not too hatefull, and that's what tools are for. Once the roof side was cut to shape, I re clamped the board to the frame, set the scribe for 5/16", and scribed the interior side of the cut. Once again, I used the circular saw ( vs the band saw ) and made the cut. All the boards are being held proud of the steel frame about 5/16" so foam remains on the frame flange after the foam is trimmed. With the board now cut to fit, I applied a bead of polyurethane adhesive and re clamped the board. I then use my right angle air drill, and drill through the existing holes in the steel frames. Next I use a hammer to drive the 1/4"x2" carriage bolts home, followed by a flat washer and a nylock nut, then tighten all the bolts using a 3/8" air ratchet

Gluing the lumber to the frames in addition to bolting might seem like over kill, but bolts have a funny way of working loose in lumber, and since the adhesive is not that expensive, I think it to be good insurance to prevent a squeak. 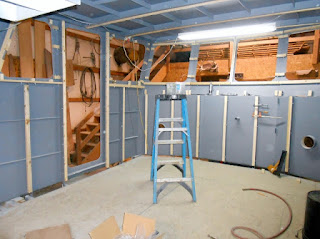 As I type this post on this rainy Tuesday, I have all the ceiling beams finished in the wheel house, salon, and aft deck. I also have the wheel house walls and windows complete, and am getting ready to start on the salon. Another full day, and I should be finished bolting all the lumber in place.

I have an insulator  showing up in the morning to give me a price on foaming the interior. I'm going to foam the interior down to within a couple of inches of the weld zones.

While I still have the boat in the shop, I'm going to also install the Cherry plywood at the window opening so I don't have to deal with that at the cold boat yard. I'm  using a clamp ring for the window installation, so I have to have the finished wood in place in order to install the windows. The window installation is also complicated by the fact that  the maximum wall thickness at the window is 2 1/4", while the frame thickness of the boat is 3 7/8". It's kind of a strange deal to describe, but on the salon windows and the side windows of the wheel house, the windows will be set in by the difference. The front wheel house windows will be flush with the  interior as I was able to make the tabs work out to 2 1/4" wall thickness.  It will look OK as I'm going to spend a righteous amount of time getting the trim right, but it does add a whole bunch of work to the window trim job. I'm not quite sure how the finish window trim will look, but I'm going to use each clamp ring as a template before I install and make a pattern out of paper board for future fabrication of wooden trims for the windows. 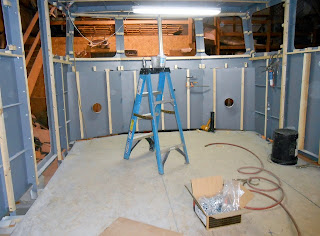 The weather had for sure turned  here, but I have plenty to keep me busy getting the super structure in a more finished state. Taking the super structure as far as installing the windows before she's landed and welded in place has entered my mind, but I think it too risky. I can install lots of the trim, some of the ceilings along with some wiring and a host of other items before I have to commit to taking her out of the barn. While I'm aching to have her assembled at the boat yard, all of this work goes much faster while she's in the barn.