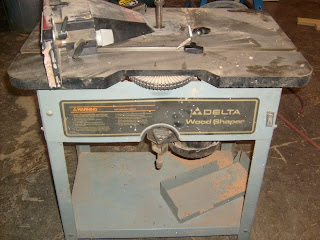 If you're ever in the market to get your fingers bobbed, grab a six pack of tall boys and come on over to my shop where you can play around with the wood shaper. The wood shaper has a 3 hp motor and whirls some heavy bits around at 12,000 rpm. The sound made by the bits spinning is almost as impressive as the wood that pukes out the discharge shoot. The shaper is a nice tool I bought about 20 years ago while I was renovating house's, and it's becoming quite the handy item on the big boat build. 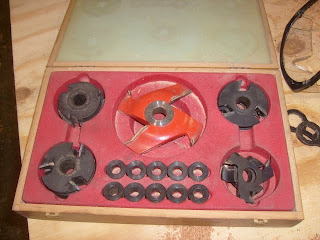 inet style doors. They are what I'd call frame and panel doors consisting of styles and rail pieces with a raised panel. These doors are overlay doors meaning the sit on top of the cabinets 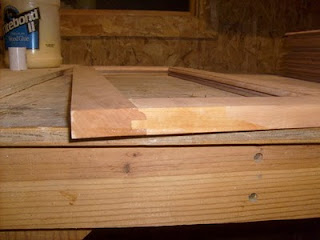 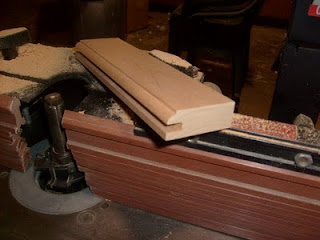 e frame vs a flush door that would fit within the face frame. Overlay doors are much easier to build and require a tenth of the precision t 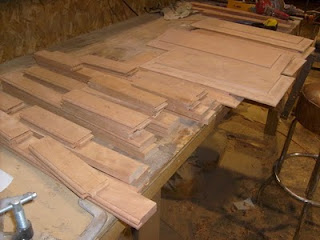 hat flush doors require. The method of joinery I'm using is called cope and stick. Basically one cuts a grooved profile in the panel side of all the styles and rails, then you cope the rail ( top and bottom horizontal pieces) to fit into that pr 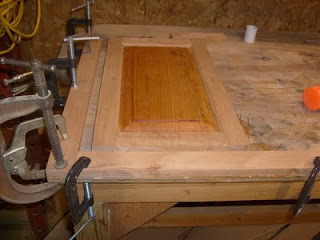 ofile. The panel then floats in that frame you just created. It's a pretty nice looking door and adds a little more detail than one would get by using a flat plywood panel.

I've built some doors for some other projects lately, and on those projects I used 1/4" 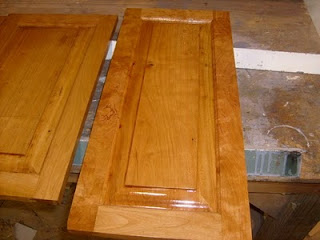 plywood for the panels. On the boat build, I've decided to invest more of my time and build raised panels for all the cabinets ( well at least the cabinets in the master cabin and probably the galley). Because the raise panel is a solid wood panel, I had to build the doors to allow for seasonal movement of the panel. The air is pretty dry here now that we are in the late fall time, so if fit the panel on the loose side. I gave myself 1/4" gap all around the panel to allow the panel to "float" within the frame. I cut some pieces of 1/4" foam backer rod and stuffed the backer rod in to the groove of the style and rail before I assembled the door. The backer rod holds the panel centered in the frame while allowing it to expand and contract as humidity changes. After I get all the finish on the doors, I might go back and put a dab of glue in the center of the rail @ the center of the panel. Since wood expands across the grain, a little bit of glue at this location will allow th 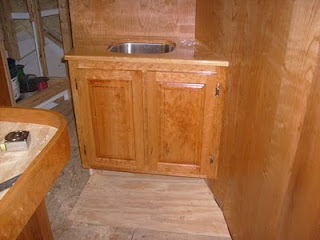 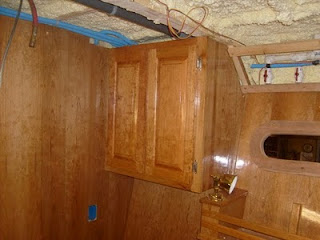 hen the door closes. If one would glue the panel tight all the way around the style and rail frame, it wouldn't be long before the expanding panel would destroy the frame. Before I assembled the doors I put a coat of finish on all the panels. If I didn't finish the panel prior to assembly, a line of unfinished wood would show up once the panel started to expand or contract. I clamped some boards to the edge of the work bench to help keep the doors square while I assembled them. I then checked the diagonals to assure the door was perfectly square before I clamped them.

After I assembled the doors, I gave each door three coats of urethane sanding with 320 grit between coats. I used a self closing hinge that holds the door shut. I don't think I'll put much faith in these hinge's holding the door shut once the boat experiences some weather, so I'll install some catches' of some style to make sure the do 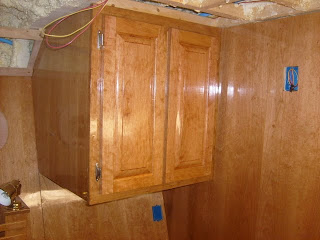 ors stay shut. While the drawers have no pull hardware, I'm thinking of installing some pulls on the doors.
Posted by Conall at 4:16 PM