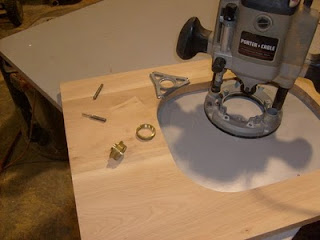 After edge gluing the boards that are to be the top to the sink base for the master cabin, I soon realized the top had some flaws. I had already cut the top to size and had routed the sink cut out, and because of the work I had invested, I decided to make use of the flaws in the wood.

The top had a few knots in it, and after looking at them with a little more thought to the long 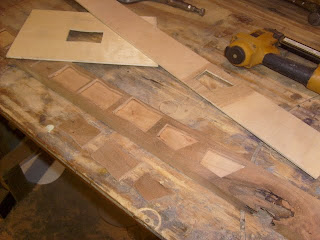 A Dutchman is a piece wood inlay that replaces the defect. The idea behind the Dutchman is that it is a legitimate repair that adds character to the wood. If you can't make a wood joint invisible, you should highlight the joint is another way to look at this type of repair. The Dutchman type repair seems to have lost it's appeal with the wide spread use of plywood and it's near defect free surface, but one can find these inlay repairs on lots of early period furniture.

To make the Dutchman, I first made a couple of templates that I would use to shape the inlay pieces. There is no rhyme or reason to the shape of the inlay, so I just went with whatever popped into my head. The easiest and fastest way for me to do inlay work like this is by using my router. Once the templates are cut, I use an inlay tool that works with the router. I clamp the template over the piece to receive the in 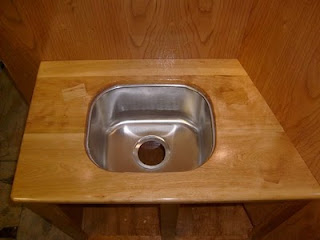 Some people need to have a flawless piece of work, but I kind of like the character that a few knots or a repair such as a Dutchman adds to some of my work. I really like the occasional knot as long as I'm sure it will not drop out. But if one thinks the knot is in jeopardy, I think a Dutchman is a legitimate solution.
Posted by Conall at 6:50 PM