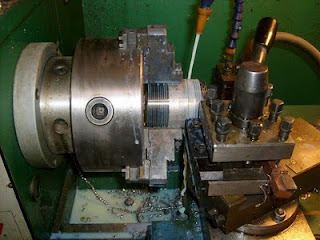 OK, I'm getting kind of tired of the re-work, but I had to move my sea chest location once again. I had abandoned the first location as the intake was to small, increased the size of the intake and moved the sea chest to the area in front of the generator. After doing some assembly, I realized that the sea chest was going to be to close to the water line, and I want it a below the water line. I also felt that having it in front of the generator was going to be a pain in the ass, and I'm sure I'd be regretting it years down the road as I banged into it while servicing the generator. So, as much as it pained me, I moved the sea chest again. I turned it 90 degrees, and moved it another foot away from the generator.

During my recent visits to the scrap yards ( selling scrap metal), I've been scrounging around for some for some 2" 316 stainless. No luck on finding some, so I had to break down and make a small purchase of some new material. M 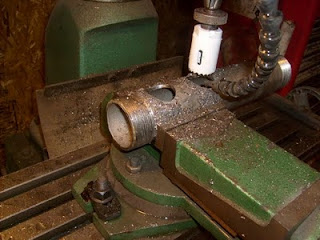 aking sure all my parts were 316L was important to me so having to buy new material was not such a bad thing given I could assure quality.

The first line of business on the sea chest was building the manifold. I used a 12" piece of 2" along with two 1" x 4" nipples. I cut the nipples in half on my lathe so I ended up with the four pieces needed for my valves. Using a hole saw, I bored four holes in the 2"x12" nipple so I would be able to weld in the valve stubs. I was going to use a boring head to make the bores, but the hole saw did just fine by using the micro feed on my mill and running water on the bit to keep it cool.

Welding the 1" nipples in the manifold was pretty easy. I stood the 1" stubs on the work bench then lowered the 2" manifold on to the stubs and held the manifold up with blocks. This way I was able to keep the stubs pl 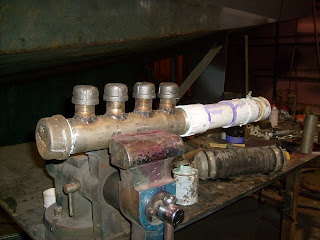 umb, level, and square with the manifold without having to come up with a clamping contraption. I tacked the stubs in place, then placed the manifold in the vice and welded her up. I made two passes around the each stub. I air tested the manifold to 40 psi and I'll be damned if it passed on the first try.

I bolted the stainless flange to the flange I welded into the hull, and just for kicks I tested to see if they were electrically isolated. The electric isolation test was good.

I've yet to find a used 2" sea strainer, so I'm unable to finalize the assembly. I'm going to need to brace the manifold both vertically and horizontally, but I can't make the brace until I know the final location of the end after the sea strainer is in place. I also think I can lower the manifold 2" by using a close nipple vs the 4" nipple I have between the ball valve and the "T". I'm going to keep my eyes open for another valve that with an overall length of 4" vs the 6" valves I have now. I really can't finalize any of this until I I have a sea strainer. 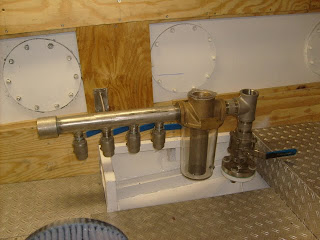 I'm very happy with how the sea chest looks, and more happy with it's location. This set up will be extremely easy to service and bring various water intakes on or off line as I need them. I went with a "T" vs a 90 on building the sea chest in case I had to blow a clog out of the intake while under way. I can screw a nipple down in to the "T" to get above the water line, and clear any thing away without having to get into the water. If I had used a 90, cleaning from the inside would be difficult at best.
Posted by Conall at 4:24 PM