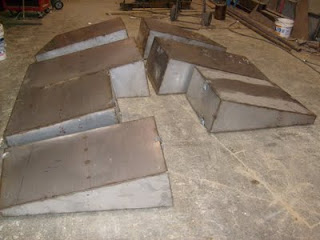 My current boat ( 28' Carver Mariner) has a whopping 25 gallon water tank and I'm amazed at how long we can make that 25 gallons last. On the current boat we use water primarily for washing dishes and an occasional quick shower. The head on the Carver is raw water flushed so we don't tap into that precious 25 gallon supply.

The water tanks on the trawler ( I guess I'm going to have to name her soon so I stop calling her the " trawler ") are constructed out of stainless steel. I went with stainless steel vs plastic for a few reasons. Stainless is considered top o 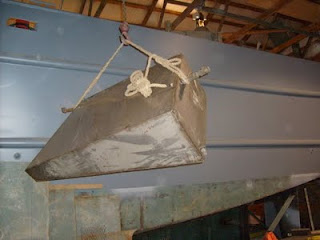 f the line in regard to potable water tanks. Due to where I'm placing the tanks it made more sense for me to fabricate the tanks vs having them fabricated out of plastic. I used 14 gauge 316L for fabricating the tanks. All the associated fittings for the tanks are 3/4 NPT stainless ( fill, vent, supply) couplers welded in place. All the tanks have one center baffle running across the width of the tank. The tanks fit between the frames of the forward area so the tanks have to fit into a 30" wide space. Because of the 2" flange I welded on to the frames I had to make the tanks 27" in width to give me a little room for the install. I might be kicking myself in the ass years down the road, but I decided to not install inspection covers in the tanks. I have a total of 8 tanks giving me approximately 350 gallons of water.

The tanks are held in place with a flange welded on to the front and back of each tank. The forward mounting system consists of a bracket welded to the hull with 3/8 studs welded to that bracket. The forward tank flange fits over those 4 studs and is bolted down. The rear mounting system consists of a similar bracket only I welded nuts to that bracket and used four 3/8 bolts through the tank flange to mount the rear part of each tank. I used studs on the forward mounting system because the bracket is so deep it was easier to get a nut started vs getting a bolt started. It was also easier installing the tank by dropping the tank over the studs then having a little wiggle room to get the bolts started in rear of the tank. For 3/8 studs and bolts I drilled the corresponding mounting flange to 1/2 " and used thick washers for the mount. I made a gasket out of flexible PVC to help isolate the tank bottom from the mounting brackets ( no metal to metal contact other than the mounting hardware). I allowed myself 4" of clearance between the front of the tank and the center longitudinal frame ( center spine). 4" of clearance was barely enough room, as it is a tight fit to get my arm in there. All the tank mounting hardware is stainless steel

To supply water to the pump I welde 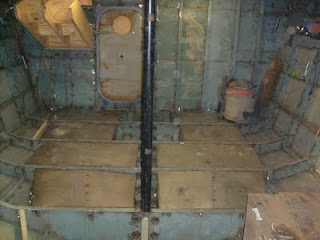 d a 3/4 stainless coupler in the the bottom of each tank. Having given this a little more thought I now wish I had used a pick up tube entering the top of the tank and going to the bottom. Too late for the pick up tube method now, but again I wish I had gone that route. So each tank has a coupler welded in for supply, followed by a gate valve for each tank,followed by a "T" for each tank, all of this terminates into a common supply line leading to the pump. I went with this set up so I could isolate each tank vs all eight tanks having a shared liquid level. If I ever have a catastrophic failure of a tank, I can take that tank off line and not loose all my water. I also have the choice of just filling a couple of tanks if I want. Since I am able to isolate the supply side of the tanks, I also have to be able to isolate the vent side of the tanks. All the vents will terminate at a manifold that can be valved before venting at the wheel house deck above the fill point. The tanks will fill from two points on the wheel house deck via port or starboard fill pipes. Because of the large cabin and wheel house roof areas I'm making provisions to be able catch water off the roof to fill the tanks.

I air tested each tank to 6 psi as this will be more than the static head the tanks will see once the vent tube fills to the deck level. After I fabricated the tanks I installed them to check fit and make sure all my brackets would work so I could start the interior painting. If I had been a little more careful with my measuring and fabricating I could have squeezed another 50 gallons of storage in my system, but all in all I'm happy with 350 gallons.
Posted by Conall at 9:25 AM