I have four fuel tanks on board of my trawler. Given this first sentence seems to sum things up I could be getting off easy in regard to this post and leave it at that. But since I'm a little on the long winded side of this world, and the fact that I'm totally into all things steel boats, I feel as if I should elaborate a little on my fuel tanks.

The four fuel tanks on board are integral tanks meaning they are now part of the hull. The tanks are on the outboard sides of the 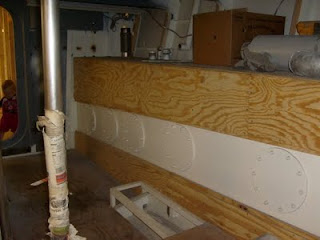 hull in the engine room between station 9 @ 14. I am using the term station as this is how the prints describe frame locations, and these two locations are actually steel bulkheads. I framed the tanks using 1/4" plate. All the tanks have a baffle located @ 30" on center witch is also what the frame spacing is. The baffles have the corners clipped off of them and also have 2" holes in the center to let fuel flow freely between them. The baffles are welded on all four sides of the tank walls and by using the slug welding method I was able to weld the baffle to the tank top. All four tanks have a drain valve at the lowest point in the tank in case I ever have to empty the tanks completely.

I could not in good conscience build thes 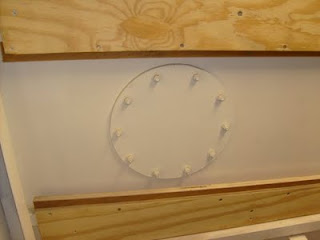 e four tanks without providing a way to get back inside of them if I ever have to. I added an inspection port between each baffle for future maintenance. The inspection covers are made of 3/8 plate and are attached to the tank by a 3/8 stud that is welded to the inside of the tank wall. The inspection ports are 12" in diameter and are in the front wall of the tank. Because of the size of the tanks, putting the inspection ports on the top of the tanks made no sense as it would serve little use due to the depth of the tank. Getting the inspection covers to pass the air test proved to be the most difficult part of building these tanks. Using fuel rated gasket material I cut a gasket for each cover and punched holes for the studs. I then used a fuel rated gasket sealant applied to the gasket to improve the seal of the gasket. Because I did not want to stretch my mounting studs I used a torque wrench to tighten the nuts to the correct torque for a 3/8 bolt. My first air test showed each stud to leak! Next I tried using a heavy thread sealant on the studs. My next air test showed the studs to leak! The problem was the weld holding the stud to the tank was not air tight and my 7 psi air test was leaking past this weld and then past the mounting nut. My solution to making the covers air tight was to mill a counter sink in each tank cover to accept an "O" ring for each stud. I milled the counter sink in the covers to a precise depth so that the washer under the nut would compress the fuel rated "O" ring and provide a seal once the nuts were torqued down. My next air test proved all the studs passed the 7 psi test. I spent another day or so finding pinhole leaks in the tanks and making weld repairs. The final air test was to have the tanks hold 7 psi for 24 hours.

My two forward tanks ( port and starboard) hold 200 gallons each. The two aft tanks ( port and starboard) hold 500 gallons each. I intend to use one of the forward 200 gallon tanks for running the main engine and generator and the other three tanks will be used for storage. I'll have to transfer fuel from the various tanks via an electric fuel transfer pump. I'll probably use this same pump to polish my fuel from time to time to keep it clean and keep the condensation water out of the fuel. The total fuel capacity on board will be around 14oo gallons. This 1400 gallons is more than what the boat was designed for so I contacted the architect who designed the boat and reviewed this with him. Hal Wittacre ( the naval architect) did some stability calculations and recommended adding more ballast to the boat.

The fuel management system is fairly complex and really needs it's own post to get into the details. Once I start work on this part of the fuel system I'll add a fuel management post.

The tanks are shown in these pictures with a plywood cover. I did this so that I could protect them during construction. Plywood will also be the final cover as there are many things that will be attached to this plywood.

Conall
Posted by Conall at 7:01 AM