Almost every truck and excavating equipment I own uses group 31 size batteries. Some pieces have them in series, some in parallel. For the generator and the main engine on board, I decided to use group 31's.

A group 31 battery is for sure overkill for my three cylinder 10 kw generator, but since the money's about the same, and I  had spare batteries in the shop, I used that size anyway. The main engine will start on one group 31, but two will probably be better in case I get into a situation of extended cranking or colder weather.

I  still have quite a bit of scrap cherry plywood on board so I decided to use this leftover material to build the three battery boxes needed. The house bank consists  of ten, six volt golf cart batteries, wired series/parallel giving  us somewhere around 1200 amp hours. 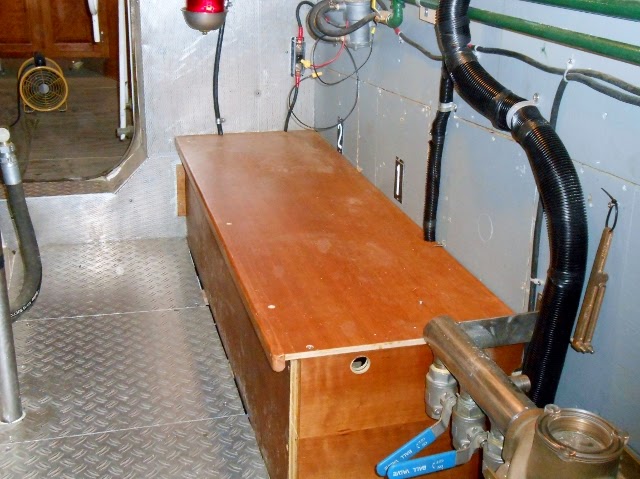 The  house battery box along with the two other boxes for the main engine and generator have now a dual purpose of comfy engine room seats, along with a sort of work bench. The house bank box is perfectly situated for checking oil, changing filters, and priming the injection pump. 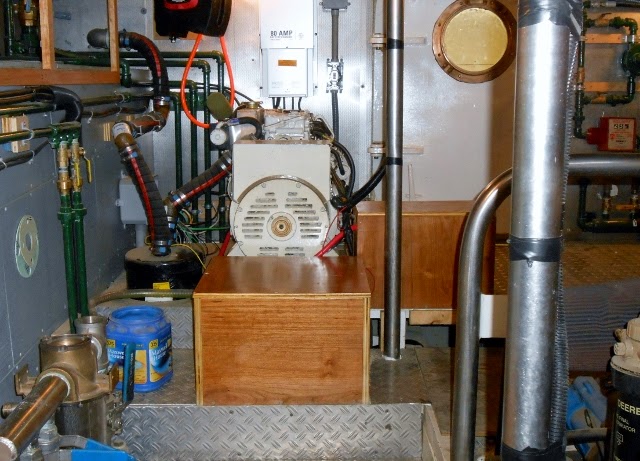 Battery charging for all three banks is being done by a Charles 80 amp, three bank, smart charger running either off of shore power or  the generator. 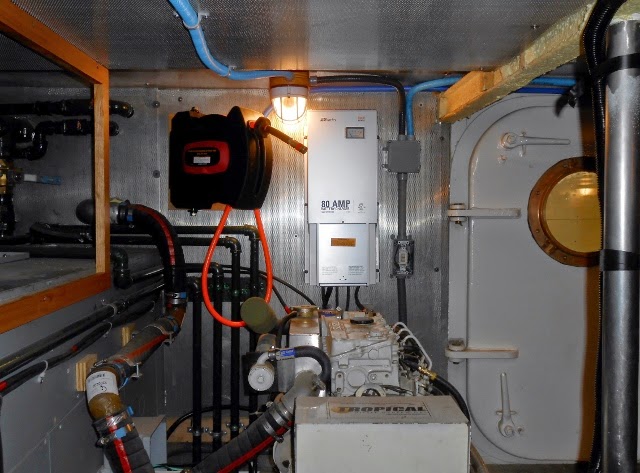 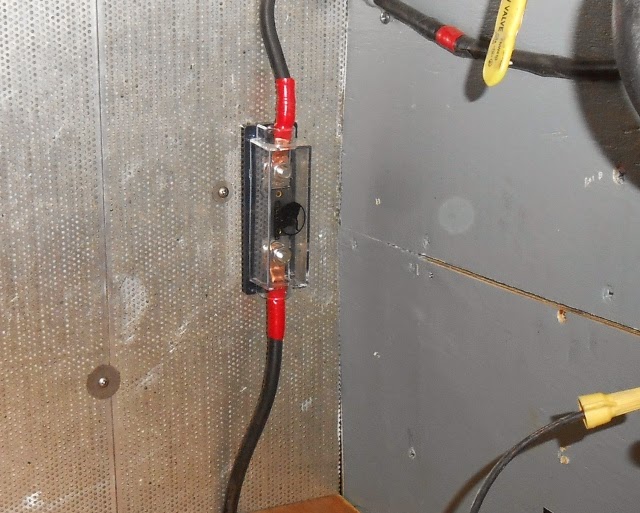 The generator has it's own single circuit disconnect switch. The main engine and house bank  are  switched off of a Blue Sea switch panel that has the ability to combine both banks. This switch panel also  has three 15 amp circuits that are hot even when the house bank is shut off. Having those constant hot and fused circuits makes for a good way to  power the bilge pumps. This switch is a  newer version of the old style switch. When this switch is turned on, both banks are not combined, but are seeing charge from the alternator. To prevent blowing out the alternator diodes, I am utilizing a Blue Sea automatic charging relay. The ACR automatically combines batteries when charging, isolates batteries when discharging, and also isolates batteries when starting.

Plowing through building the battery boxes, fabricating the battery and start cables, grounding all to a single ground locations, installing the  switches and relays....kept me busy for a week or so after work and weekends, but the job is finished.


Solder or crimp?  Crimp! I've been an owner operator trucks, tractors and heavy equipment for over 30 years now. 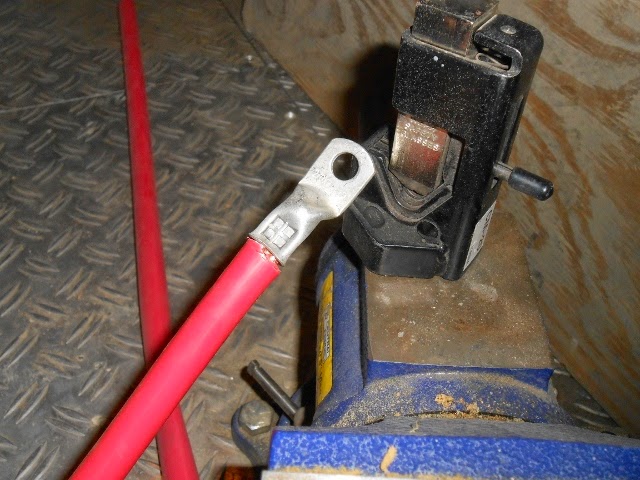 I can tell you from first hand experience I've had a solder joints fail on factory cable ends. I've never had a crimp joint fail ever. As  important as a good crimp joint is it's just as important to secure the cables so they don't move.  I hear some guys say you should do both, but my experience says its a waste of time. The only tool I"v used for crimping heavy cable ends is the hammer activated crimp tool...pretty simple and easy to keep in a tool box. I do insist on heat shrink tube over the ends, and feel you get what you pay for. Cheap heat shrink is another wast of time and money. 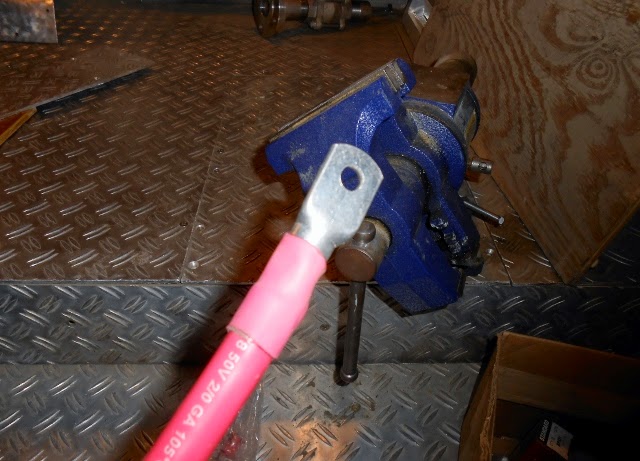 Because all the DC power is now finished, it was time to connect the main engine and generator control panels in the helm to each engine. 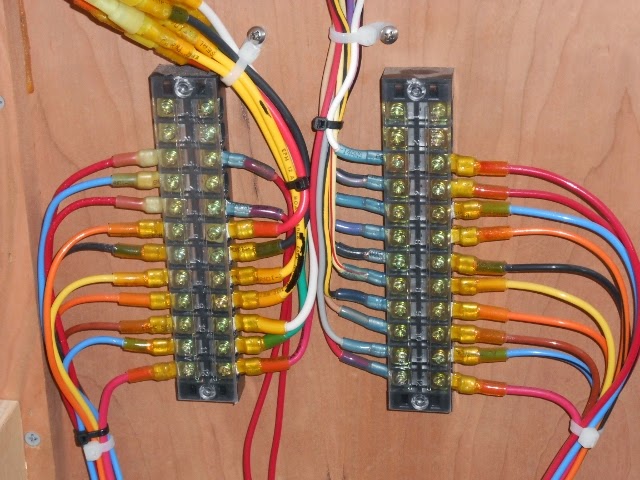 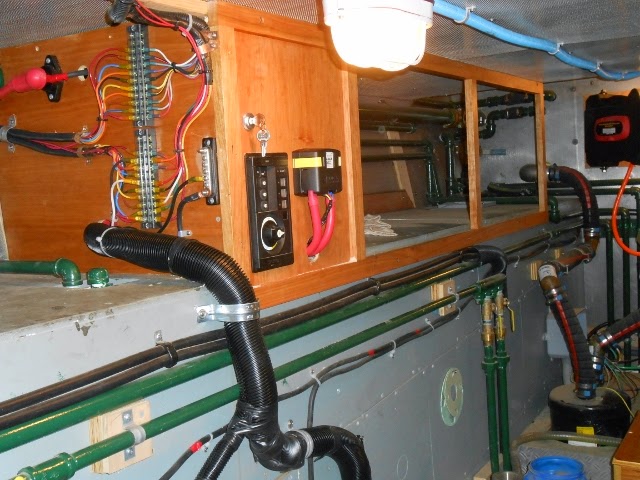 I'm installing the engine room start switch's in the same panel I built for the house battery switch and ACR. The generator start switch is a pretty easy deal to replicate as it only uses three wires: Battery, start, and accessory. 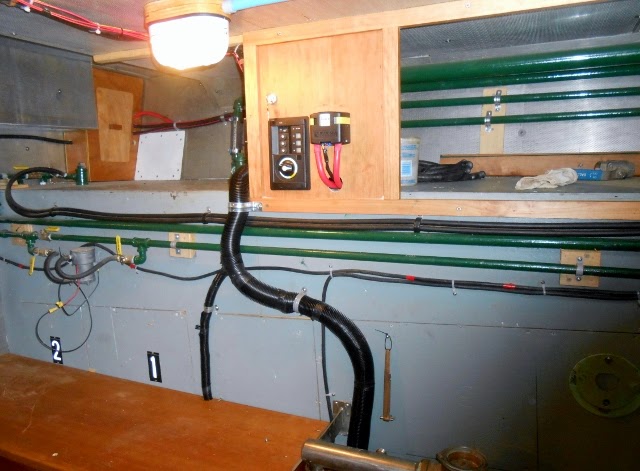 You need the accessory switch to power the electric fuel pump. I'm not going to have any gauges, just a light to let all know when the switch is sending power to the starter. The main engine switch in the engine room is going to take some figuring on my part ( this is why it's not installed yet), as it uses a power/accessory switch, a start button, and a kill button. 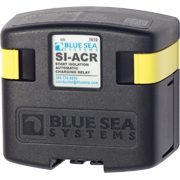 I should probably say at this point that I have a whole new level of respect for those electricians who are able to keep all their wires straight, tight, and neat. I put some effort in to trying to keep things neat and orderly looking, but my skill is  nowhere near the level of the pros. You have my respect straight,  tight, and neat wire dude!

The next item on the list was to get the louvers installed at the top of the exhaust funnel. I'd had a tarp up there to get  me through the winter, but it was a  pain as it had blown off a few times. 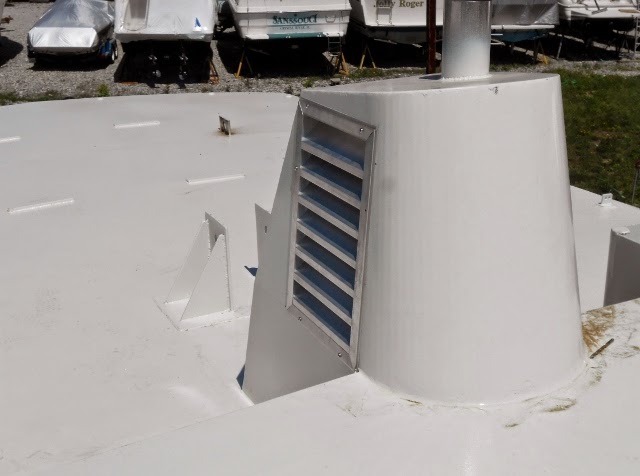 This job was a pretty simple ordeal and took longer to get the tools and  parts up and back than it did to fasten the louvers. I used aluminum insert  nuts ( similar to a rivet), then used 1/4" stainless machine screws. I was able to caulk the intake louver weather tight against the funnel, but can't caulk the exhaust louver until I connect the exhaust pipe ( the louver is my access to clamping the exhausts pipe to the fixed exhaust exit at the funnel lid). Summer has found us in southwestern Ohio and temperatures are forecast to be in the  mid to upper 80's for the next ten days. Having the exhaust funnel operating makes a big difference in the engine room as air now rushes down the stack.


With the louvers now in place, there's no real reason not to assemble the exhaust piping. I had done a half assed job of fabricating the exhaust piping a few years ago, so all the parts were at the shop. Now that it was time for final fit up, a bit of welding and tweeking was all that was needed to fit the pipe. Don't misunderstand tweeking from twerking as I don't twerk. I'm  happy with how the exhaust pipe is now dry fitted so I'm going to go ahead and fabricate some righteous hangers ( I'm not planning on using the plastic hangers you see in the pictures). 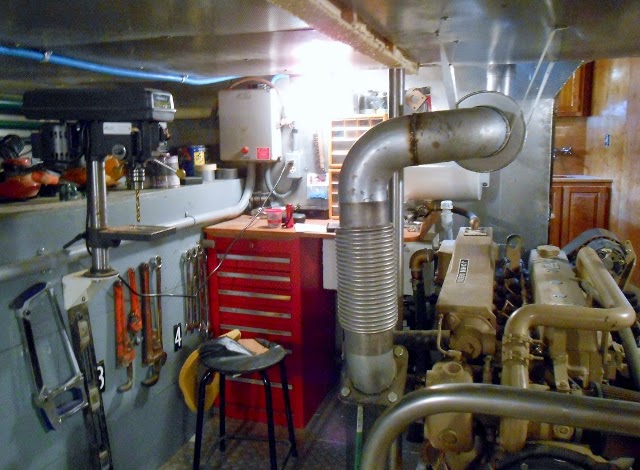 Two hangers for the silencer should be plenty. I already have the hangers in the stack, and I  must say they are working great looks. 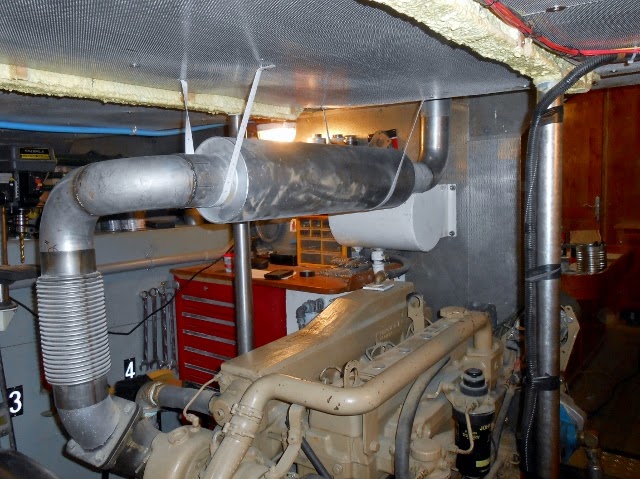 Adjacent to the refrigerator is a tall access panel just for installing the long exhaust pipe. I made this panel as tall as I could without having to remove a cabinet, and I'm happy to say that I was able to easily fit an 8' long section of pipe down through that 54" tall access panel. Man is it sweet when a design works out for the good. 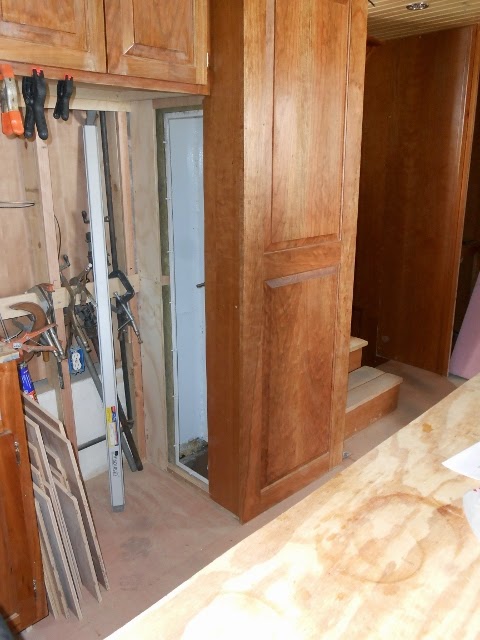 The exhaust stack is going to get lined with some reflective  material to help keep heat in the stack. The turbo, exhaust pipe, and silencer is going to get wrapped with a blanket while it's in the engine room and most of the stack. At some point I'm going to have to weld some grab bars from the stanchions by the engine to the hand rail over the transmission. The exhaust pipe is very now tempting to grab as one makes their way to  the work bench by the engine.

This week will find me installing the prop shaft and getting the engine aligned. The guys who own the boat yard said I should re align the engine a couple of weeks after she's in the water, and that they'd come up and give me a hand doing that. Access to the coupling is going to be much easier with the hydraulic pump removed. I really need to remove the pump anyway as that's going to give me better access to install two cable clamps for the start cable that I could not reach.  While I'm working on that part of the engine, I'm thinking I'm going to fabricate a manifold for the cooling loop to make it easier to tie in the transmission cooler, steering cooler, and hydraulic cooler.  I'm not a fan of multiple "T's" in anything, and a manifold will ultimately make my life easier.

The other thing that that got accomplished was my inspection by the department of natural resources, so we now have a hull ID number and are able to get her licensed.

Because I had already sourced and accumulated most of these parts I just blogged about, my start in to getting the mechanical work rolling has been a little better than I had anticipated. While there's still some wood working that needs to get finished, I"m glad I'm wrenching now as this makes  me feel like a launch is possible this year.