Progress seems to have slowed down a bit as I've been doing a few projects around the house. One larger project was building an Island for our Kitchen. 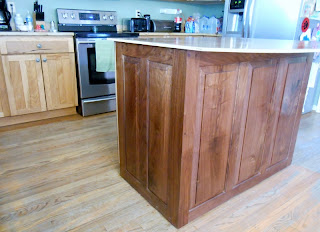 I had some nice Walnut stashed in the loft of the barn and just had enough to get the island built. The business end of the island has two doors and two drawers on it and give us some much needed cabinet space. We're looking for a remnant piece of granite for the top, so for the time being the plywood you see is doing fine. 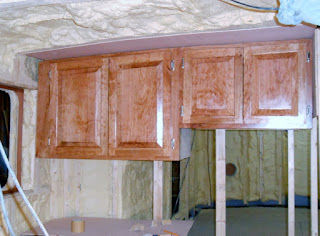 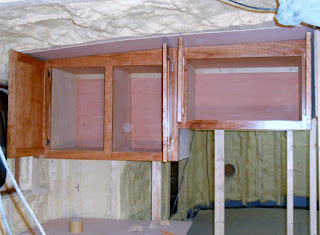 The roof of the salon has about a five degree arch to it so I decided to build the doors to match the arch. I  built the cabinet box's square, but did not want the step look of square doors against the arched ceiling, so I decided to match the ceiling with the doors. The top style of the cabinet frame, was made four inches vs my standard two inches and scribed to the proposed ceiling. I should say at this time that I'm giving myself plenty of a fudge factor since I"m building all this without having finished walls and ceilings in place. In critical areas, I 'm building in large over hangs and fillers that I can scribe, trim and fit once she's at the launch site. It's kind of tough to do things this way, but it's how it has to be done. The bottom of the doors are square while the top of the doors  has a five degree angle on them. The five degree angle is also in the top of the raised panel. It sounds pretty easy, but it gave me a little of a fit. The angle changes just a fuzz as you move port, so I had to do some adjusting. Adjusting means throwing cut pieces in the wood stove and starting over. Once I had all the doors fabricated and I was fitting them to the ceiling, I dropped one of the doors on the concrete slab and gave the wood stove some more fuel. Replacing the door should have been a smooth operation given I built it once before, and still had my cut sheet. I must have forgot the measure twice and cut once thing, because I built the door backwards and ended up feeding the wood stove some more. I'm really in no hurry, and while it's a frustrating thing turning a simple job in to a dragged out comedy, it really doesn't bother me too much and I've given up getting pissed off. It's all over now, and I do think it looks pretty good. The bead board ceiling is going to be 5/8" thick and when I open the new doors it looks like I'm going to have about 3/8" clearance between the doors and the ceiling. It should look sweet against the painted ceiling. 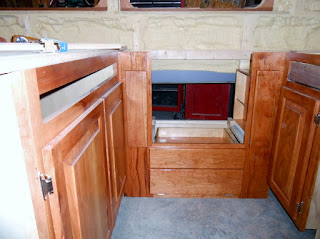 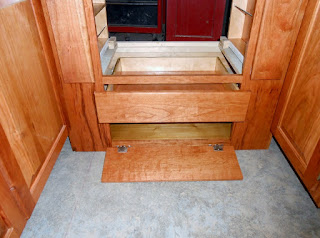 The range cabinet is another build that became a little bigger than I had planned. Because I had to center the range in the galley, and me wanting a certain amount of galley space, I had to use 7" fillers on either side of the range. Not wanting to waste that space, I built two doors to go in each of the filler space. The doors are on their side, and while only four inches wide, one will be used for a spice rack, and one will be used to hang long utensils. I used some 1/4" aluminum round stock to created the keeper for the pull out shelves. Because I used raised panel doors on the cabinets to either side of the range cabinet, I had to do some careful layout when building the pull out shelves. One inch is about the minimum I like to go for a frame, so I was able to hold the pull out shelf an inch away from the range. This gives  me about 5/16 of clearance as the pull out shelve pulls past the raised panel door on t he sink base to the left, and the door/drawer cabinet to the right.   I had to  notch the back of the range cabinet so I could get a six inch air conditioning duct from the lazzarette to the wheel house, and this cut out encroaches in to the space under the range. Because I framed in the duct cut out,  I was able to create a larger pull out drawer under the range, and the smaller space  under that drawer ( where the ac duct notch is ) became a cubby accessed by a drawer front that flips down. I'm also  happy with how this looks and how I was able to snatch some usable space out of the range cabinet. 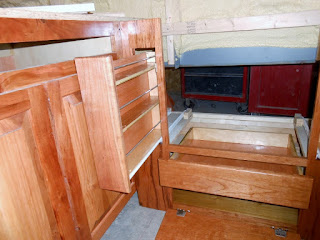 I've been toying around with how to build the drawers for the galley, salon, and wheel house and have decided on dove tails. All the drawers in the cabins below use a sliding dove tail on the drawer side that slides in to a dove tail dado on the drawer front. The sliding  dove tail is a good joint, but I like the look of the half  blind dove tail joint. For the four galley drawers, I'm going to  use a half blind dove tail and screw a drawer front on the that box. All the drawers are going to be solid wood  sides and fronts, with a plywood bottom and a plywood back. The back and bottom will fit in to a dado. The salon drawers under the salon table settee will also be half blinds with drawer fronts. 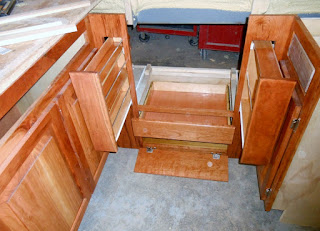 All of these drawers will be overlays. I'm thinking about going with a different look in the wheel house and maybe use a flush drawer with a through dove tail for the joints. I'm getting a little ahead of myself with the wheel house thoughts, but it's not too far down the list. A guestimated drawer count for what I'm going to be building is four in the galley, seven in the salon, and eight or nine in the wheel house. When it's all said and done, I think I'll be pushing over 50 drawers on board. It's starting to feel like a floating cabinet.

I should be posting some drawer construction in a week or so as I've already started building them.

Cheers
Posted by Conall at 8:32 PM