The move of the boat represented about two feet forward, then two feet back. It was a pretty easy thing to with a little nudge from my skid loader providing the power. 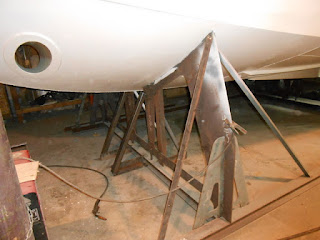 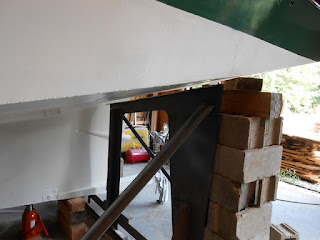 Getting the boat on the axles was a pretty straight forward job that consumed some hours. The first thing I did was reinforce the bow section of the building cradle. Since the aft section of the boat was getting lifted the highest, I decided to jack up this end first, and then do the bow. I was afraid the lifting cradle on the bow would not handle the shifting, forward push of the load, so I added some bracing to the cradle. The next step was to build cribbing using concrete blocks on the port and starboard side of the boat to catch it if something bad happened. I knew it would not twist off of the jack since it was supported by the bow cradle, but if the bow cradle failed, and it dropped down on to the cribbing I had under the bow, it could roll off of the jack, hence the cribbing on the sides.  I used a 30 ton bottle jack under the keel and a frame member to jack the boat up. I also placed cribbing along side the jack in case the jack failed. 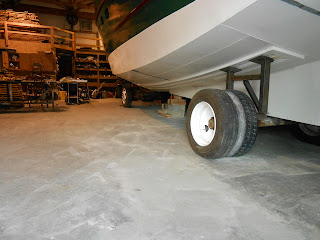 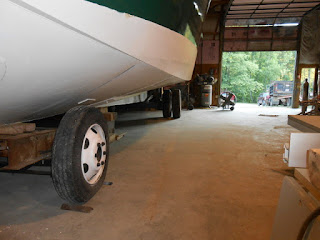 The boat  went up off of the jack stands smoothly, and without any hiccups.  I was pretty pumped to see it separate from the building cradle, and slow was the speed I chose to operate at. I would lift if a couple inches, then stop and take a walk around to see how it was behaving on the bow building cradle. Once it was high enough, I would add some wood blocks to the temporary side cribbing to keep the distance to the hull close, then lift it some more. I guess it took about an hour and a half to lift it the 14" I needed to get the axle under the keel. Most of the time was me checking things out and going outside the barn to chain saw more wood blocking as she got higher.

Being able to jack this boat up from one point gives some testament to how stout she's built.

Placing the hull down on the forward axle was much easier and went pretty quick. I just had to jack the hull off of the forward cradle, cut the cradle and strong back away, then roll the steering axle in place. I took a few measurements, and made sure the steering axle was parallel to the rear axle, placed some two inch blocks on the I beam cross members I had made for the steering axle, and lowered the hull on to the steering axle. The only hiccup I had doing this was when I was putting the hull on blocks so I could move the jack, two of the concrete blocks broke, and I had to replace them. The loud popping of the block made me jump a bit, but it worked out OK. As I placed the full load of the hull on to the steering axle, I quickly realized the tires are not beefy enough. If I tried to haul the boat with those tires and as much as the tires have bulged, the tires would quickly heat up and blow out. A blow out would be sure to happen even at the slow speed I'm going to be traveling at. I kept more of the load on the keel blocks, and a call to my tire guy assured me I could replace the 10 ply tire with some larger 24 ply tires that would make the trip. I'll deal with replacing the tires in a week or so. 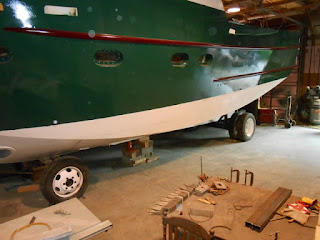 The hull is now about 18" out of level so very little work will be done up there until she gets to THE LAUNCH SITE. There are a few little jobs I need to get finished before I haul her out of her nice cozy barn, but my main focus will be  getting the super structure ready to install. Now that she's on the axles, I measured her down the road height at 14' 5". This height is lower than I had originally thought it would be, and that's a good thing as wires should be of little issue. I will clear the highway overpass by more than a foot and a half, so for right now all is good.

Now that the hull is on the axles, and I have the cradle removed from the shop, I am moving on with getting the super structure put together. The panels are already built, and now that I have the cradle steel available to me, I'll put together a gantry and get on with some more building. The building part of this type of project is fun, with all the devil in the details. I'm not going to make any promises, but this next part of the build should go pretty fast.