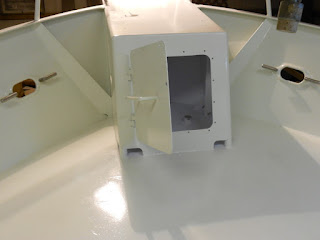 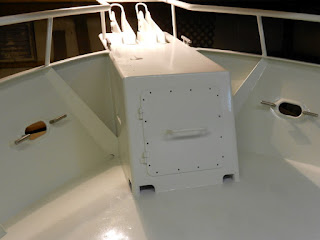 Now that I have finish paint on the fore deck, I had a few bits I could wrap up and get them off of ye ole list.

The first item to wrap up was the door on the pulpit. This is one of those items I have to give an old WTF was I thinking when I designed this. The door part is OK as this will make a nice place to store anchor lines, dock lines and even a shore power cord. The WTF thing comes for why I put all those bolt holes in the door. All I needed was one bolt that I could use a large wing type bolt to hold the door fas 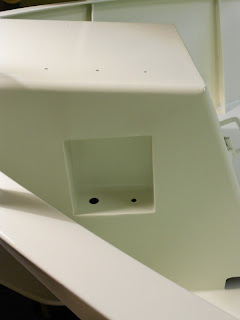 t. I'm thinking I was planning on storing air in this locker, and maybe I was afraid the air thieves were going to stop by and get some of the old O2 I was keeping safely behind door number one. ??? I also had someone ask about the notch in the side of the pulpit for my air hose connection and my wash down hose connection. Here's a better picture of the notch I created in the side of the pulpit. I need to find nice looking flush, black plastic caps I can silicone in to fill all those bolt holes. The pulpit is framed out of 1 1/2" stainless pipe, and stainless plate was used for sheathing. Everything on the pulpit is stainless steel, so when I don't have to worry about rust from chipping paint while we handle the anchoring gear. I notched the bottom of the frame so I could easily hose out under the pulpit and make it easy to maintain. I had originally set this up for a chain windlass and I was afraid that water could get down into the pulpit via the chain hawser. The handle for the door is 1" stainless bar that I bent, and also doubles the step to get up on the pulpit. The door is hinged with fixed pins that I fabricated on the lathe so the door opens 180 degrees. I might need to add some gasket material to the door in case it vibrates or rattles... we'll see about that. I wrapped the handrail around the pulpit to help keep anyone on board when the need arises to to climb out on the pulpit and deal with something.

The other item I was able to finish was installing the guest cabin hatch. Early in the build, I had planned on making my own hatch. After I had the wood work finished in the guest cabin, I decided to use a commercially made hatch. Instead of re doing the hatch coaming, I modified it a bit and bought a Lewmar Ocean Hatch. I like the hatch, and it seems to be well made and robust enough for what I intend to do. There's really not much I don't like about the hatch. It dogs down tight and compresses the gasket, it has adjustable ten 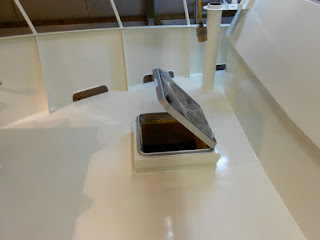 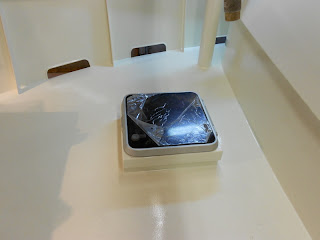 n the hinges to hold it open in any position one would want, it's lockable, and it opens from the outside as long as it is not locked. I'm glad I did not try to fabricate this hatch.

The third item I have completed are the vents for the guest cabin. These vents are what I would call a dorade style vent. Because of the Portuguese bridge, and the high bulwarks, it made no sense to have the vents on the deck. To get the vents up where the air is going to be moving, I welded six inch pipes to allow the vents to be higher. The dorade end of this contraption is some boxes I fabricated out of stainless, and that I can bolt to the pipe/bracket/pad I welded to the deck and Portuguese bridge. The basic layout of this box is that the air enters the vent, and goes travels down the six inch pipe into the cabin. I welded a bulkhead in the frame to stop water from getting down the six inch pipe. I also held the pipe proud high of the frame as another damn to discourage water from getting in the boat. If things get real ugly, the cowl vents can be quickly unscrewed from the box and water tight deck plates then screw in. On the bottom of the box, below the cowl vent intake, I drilled a one inch hole in the bottom of the bracket. This hole is to allow water to drain out. To stop wasps from nesting in the box, I 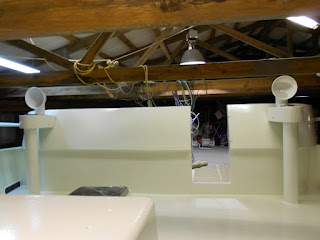 glued a piece of 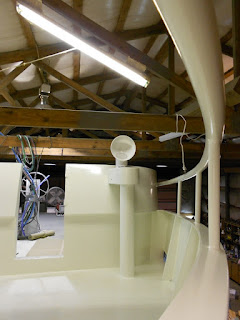 screen over the hole using some clear silicone caulk. Another reason I held the pipe proud high of the bracket, was so that I could use some hose clamps to secure more screen over the pipes to keep the bugs out of the cabin. I want to make sure that I c 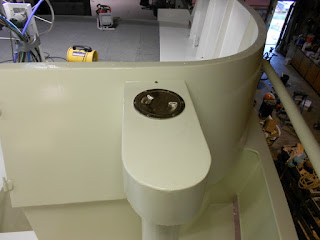 an keep air flowing in and out of the boat while we are away from it while keeping it secure and weather tight. It also goes with 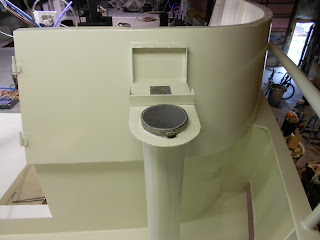 out saying that the more passive ventilation there is on board, will make the boat a happy place to be. When we're under way, the Lewmar hatch will be closed and the Dorade vents will be supplying air to the guest cabin. I'm not a 100% happy with the way I came up with ventilating the boat in this particular area, and I wish the designer would have offered a design for this. I think it's good that the cowls are up high where the air can actually get to them, but I'm not 100% keen on how I did it. I think in terms of being hatefull to look at , the pipes are not too hatefull, but it coul 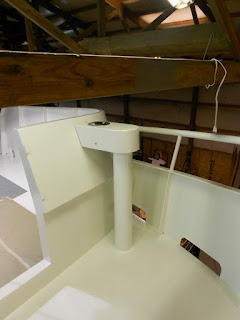 d have been better. I was going to make the intakes integral with the Portuguese bridge, but this conflicted with the interior layout of the guest cabin. An integral intake would have also been difficult to fabricate, and would have been more difficult to paint. The Dorade boxes are held in place with four bolts, and are very easy to remove for future maintenance. The dorade boxes are also maid of stainless steel. All in all, I think the pipes work good, but I'm just "OK" with how they look. One thing I can say is this design is extremely robust, and in a worse case scenario, I have another place to tie the boat off from. I'm thinking after I launch, the pipes might be a good location to weld a bit too, and hang dock lines off of. I had a fan blowing on me while I was working on the installing the cowl vents. Once I was finished, I left the fan blowing, and went in to the cabin to see how much air was making it in. I was pleasantly surprised by how much flow was entering the cabin. It looks like the design will work. I think I'm going to re paint the cowls, and make the inside the same green as the hull. I took a picture of the cowls looking at them from the wheel house so you could see a little more clear how I wanted them above the structures to get air flowing.

I'm going to keep working aft, and knocking off these easy to complete finishing jobs. This work probably goes five times as quick while the boat is in the barn and all the comfort tools are handy. All this work needs to be done anyway to have her weather tight for THE TRIP TO THE LAUNCH SITE. Next item to finish is the Portuguese bridge wooden cap, hang the Portuguese bridge door, and install the waster fill ports, and the gray water pump out port. 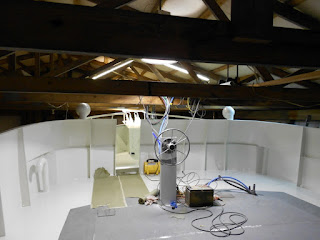 Cheers
Posted by Conall at 7:48 PM