This will probably be the one and only update on the composting toilet.

I put the composting toilet into service as soon as I had the room ready. After a few days of use and continuing my work in the boat I started to notice an odor. I was working in the forward cabin, kneeling on the floor working on the valve that drains the gray water holding tank. I kept getting a nasty whiff of funk, and after not much investigating, I concluded the odor to be coming from the composting toilet. I kept down playing the funky smell, and telling myself this was the "earthy" smell these units put forth. After a few days of this, I put down my tools and said to myself " this isn't going to work for me". I started looking at the vent pipe, the filter in the outlet and inlet, and put my hand over the inlet to make sure the fan was working. My hands are beat up and calloused, so I really could not tell how much flow was coming out of vent. I decided to get the lighter I keep to light the wood stove and see how much air that fan was putting out of the vent. Holding the lighter by the vent outlet, I determined the flow rate was pretty lame, and for that matter, it appeared that the flow rate was zero. So I moved the lighter to the inlet side of of the inlet to see if I could witness how much air was being sucked in. I now was thinking that the unit was not sealed to well, and maybe the funky smelling vapors were leaking out past the gasket and not making it to the vent outlet. Putting the lighter up against the fan inlet, I was surprised when the lighter was blown out. I re lit the lighter, and damn if the same thing did not happen again... the flame was blown out. I had the fan installed backwards, and the unit was venting into the cabin. The composting toilet is designed to pull air in across the solid waste bin, then vent that air out of the cabin via a 1 1/2" vent line, and I had it working just the opposite.

Now that the unit is plumbed correctly, I'm happy to say it is working great. While the usage is light ( two" events" per day), the odor is non existent. There is a slight musty smell when the door is opened, but it is neither offensive nor strong. The unit is easy to operate, and more easy to keep clean. The draw on the battery I use to power the fan is extremely low. The only thing I will do different in the future is to use a more compost friendly type of paper. Paper designed to break down would greatly increase the capacity of the bin. The bin is nowhere near full, but it is obvious that the paper does not degrade as quickly as other material.

This type of toilet is probably not for every boater, but I'm going to have to claim this as a success. It's pretty stinking simple, and my first hand experience finds that it works exactly as designed. I doubt very much I'll go back to the old style toilets.

After reading these last posts, you're probably thinking I have too much time on my hand, so I'm going to change the subject "matter" now. My next post in a couple of weeks will show some progress in the guest cabins. 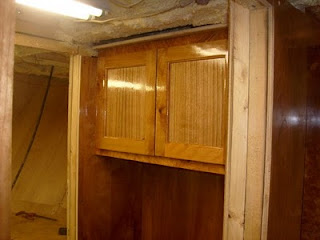 Here's a picture of the cabinet I built for above the toilet. The amount of storage in this boat is going to be nice.
Posted by Conall at 4:40 PM